Recently, I made a trip from Southern New Mexico to Albuquerque.  The journey from my sleepy little town to the big city is a big trip in more than just miles, the difference in the way people drive is jarring.  City traffic is faster, ruder, and infinitely more dangerous.  I think half the city tried to be my personal vehicular proctologist.

Normally, I would wait until the car is very close, and then suddenly stand on my brake pedal with both feet.  I have an old truck, old enough to drink and I would love to introduce someone to my trailer hitch.  Unfortunately, we were in my wife’s car and she is rather fond of it.

Everyone claims either to be patient or love people who possess a great deal of patience.  Personally, I think this is a great lie; people may admire the patience of drivers behind them, but never the serenity of the drivers in front of them.

The problem with driving is that it’s too impersonal.  You can cut someone off and the party you have offended will never know who you are—and that’s a damn good thing.  Can you imagine what would happen if people standing in line at a movie theater acted the way most people do driving a car?  Would you run ahead of someone, jump in front of them, and then shoulder your way to the front of the line?  The resulting fist fights might be a lot more interesting than the movie.  Somehow, we must add an immediate penalty for rude behavior, even while driving.

Years ago, Harlan Ellison wrote a great science fiction short story titled, Along the Scenic Route.  George, the protagonist, is out for a Sunday drive in his Chevy Piranha when a young punk cuts him off with his Mercury.  Interestingly, the Mercury has twin-mounted Spandau machine guns.  Frustrated, George calls traffic control on his radio and gets permission to challenge the punk to a highway duel.  The story is a masterpiece, but I should warn you--once you read it, the memory will distract you forever while driving.

Dueling might be one possible answer to our problem.  A lot more traffic police is another solution.  Naturally, I have an alternative suggestion.

In his short story, Ellison gave his dueling vehicles machine guns and lasers.  On a much smaller scale, I want to give every car a simple air powered cannon that fires a giant purple toilet bowl plunger coated with super glue and purple paint.  I call it the dumb-fuck gun.


Here is the general idea.  As you drive around town on your daily routine, sooner or later you will witness Typical Automotive Ridiculous Driving (TARD—yes, I know, I used this term before, but there is more than one kind of TARD).  If you believe the driving offense to be serious enough, shoot the car with your dumb-fuck gun.   You won’t fire the gun without a lot of serious thought behind it, because you are only allowed to buy a new plunger-bullet once a year.  In short, the other driver has to be a real dumb-fuck for you to shoot at him. 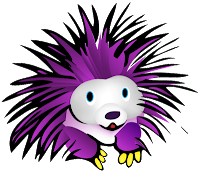 
I really like that last provision.  If your car has been dumb-fucked, you are either going to start driving very carefully, or get out of the car and walk until you can have your car repainted.  Either way, we have one less dumb-fuck on the road.

Fire trucks and ambulances should have dumb-fuck machine guns--they would never have to worry about a blocked intersection again.  School crossing guards get a tripod mounted gun.  And certain car models would come pre-dumb-fucked.  This would include turbo charged Audis and all Snaabs.  (Is there some kind of test to insure that only dumb-fucks drive these cars?)
In Albuquerque, the freeway would be mostly empty.  Abandoned on the side of the road would be a long line of purple porcupines.