I'll Drink to That!

Thirty-seven years and five months ago, a good friend gave the Doc and me a wedding present: a blender.  About ten minutes ago, the poor thing died with its boots on.  It finished making a strawberry-lime pina colada and promptly initiated—and failed—a smoke test.  This is the cocktail equivalent of throwing itself on a grenade.  If that blender had died before it finished making that drink, right now I would be in the kitchen beating strawberries with a roofing hammer.


I’m tempted to bury that avocado-colored appliance (it WAS the seventies) with a bottle of Bacardi in the back yard (next to all the pets that we told What’s-His-Name and The-Other-One we had sent to the pet retirement farm to run and play with the other pets).  It has been a good and faithful friend providing cool refreshment while living in a hot dry desert.  I should bury it, but New Mexico is also a poor state and I’ll probably just leave it on the sidewalk for ten minutes and let someone steal it.
I just remembered that I have already written about this blender before.  Strange, but then again, I do start writing this on Friday night after a liberal dose of educational brain juice.


All this is prelude to my main point: what has happened to the cocktail?  How did the art of making a good drink die?  Don’t tell me Americans drink less--they don’t.   There is more alcohol in a couple of bottles of beer than in a single good martini, but I don’t know of a bar in town that makes a good martini.
Probably every bar in town can figure out how to make a rum and coke, but call the drink a Cuba Libre and no one will know what you are talking about.  The recipe for a scotch and water is probably not too hard to remember, but it seems to be a growing trend that waitresses cannot tell the difference between “straight up” and “on the rocks.”  And every bartender should know how to make the simple martini.


When the Doc and I moved to this town, all the local physicians gave each other bottles of booze every Christmas.  Single malt scotch, infused vodkas, Irish whiskey… by New Years Eve I had enough bottles on hand to host a Tailhook Convention, or about half as much liquor you would need for a party for the local cops.   Then suddenly, everyone was giving each other bottles of wine.  A few more years passed and we received two dozen pies, some dried pasta and a quiche.  What the hell happened?  I know damn well, from personal observation, that the local physicians didn’t stop drinking.  I’m all for drinking responsibly, but why pretend we aren’t drinking at all?
Chuck, a close friend of mine, and I were on a bowling team for a while.  Well, actually, we were on a drinking team with a bowling problem.  One night, on a whim, we went into the bowling alley bar and ordered a couple of Gibsons. 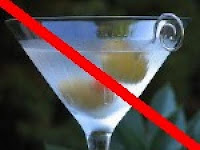 “What’s that?” the bartender asked.
“It’s a martini with onions instead of olives,” Chuck explained.


“How do you make a martini?” asked the bartender.  Now this was the regular bartender, and yes, a bowling alley rarely has a lending library attached, but we are talking about a damn martini.  It’s not like I asked for a triple rum punch served in the navel of a virgin concubine.
“Stir gin in a shaker with ice, strain into a cocktail glass and wave a bottle of Noilly Pratt over it while whispering ‘Vermouth.’  Add onions and you have a Gibson.” I explained.


The poor guy looked like I had asked him for the Holy Grail, but he did his best with gin, ice and two glasses.  I even managed to keep my mouth shut when he added lime juice for no apparent reason.  Then he disappeared into the kitchen behind the bar for about 5 minutes.  When he returned, he was holding a large plate in each hand.
“I didn’t know if you wanted chopped or sliced onions, so I brought you both,” he said.


The truly sad part of this story is that it isn’t the worst martini I have ever been served.  It would appear that very few bars even bother to keep a bartender’s book behind the bar.  Or maybe they hire bartenders who can’t read.
Chuck has decided to fix this problem.  He has found a very old bartender’s guide, which was originally published in 1903.  And he is working his way slowly through the book--one drink at a time, he is remaking the old recipes.  A beer flip, an Astoria, a Side Car, and, the other day, he made me a Moscow Mule.  Fantastic!  How in the world did this drink ever stop being popular?    Vodka, lime juice, and ginger beer served in an iced copper mug: the perfect hot weather drink.