Every year, millions of Americans make New Year’s resolutions.  And most of these resolutions last about a week or two.  Since resolving to do something evidently never works, here are my resolutions for things NOT to do.  Not doing something should be much easier and more in harmony with my lazy nature.


I resolve never again to ask a woman when her baby is due regardless of how pregnant she looks.  If you look pregnant and you're not, wear a damn sign. 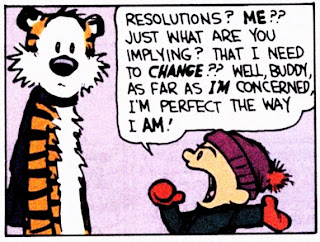 I resolve that while I am driving to work, I will no longer slam on the brakes just because a student is tailgating me so closely that he is probably trying to become my own personal proctologist.  For now on, I'll just fling trash out the windows towards them.  Then, I'll slam on the brakes.
I resolve to stop telling the obnoxious missionaries all over campus that I can't accept their free bible literature because "My coven wouldn't like it."


I resolve that while grocery shopping, I will stop showing children how to juggle vegetables in the produce department.
I resolve to stop marking "Deceased" on mail addressed to a former colleague, (long since moved to California) just because he is a horse's ass.  From now on, I'll mark it "Hopefully Deceased."

I resolve to stop tearing up all my junk mail and stuffing it into postage paid envelopes and mailing it back to the sender.  I have a gut feeling that the post office is not charging bulk mailers enough money. We tax payers probably lose money every time one of these letters is mailed.

I resolve to stop telling students that the largest engagement of the Vietnam War was the Battle of the Kao Pectate.  They actually believe this shit.


I resolve to stop eating in the university cafeteria until it stops serving road kill.  Why must the university lease its cafeterias to a company that specializes in providing meals to prisons?
While I am at it, I resolve to stop eating in Chinese Buffets or any other restaurant where the average patron weighs twice as much as I do.
I resolve to stop telling students that the last communist country on earth is the Sociology Department.  From now on, I'll include the Women's Studies Department.  The Domino Theory is alive and well at Enema U.  Even as I write this, outside agitators are infiltrating the School of Education.


I resolve to stop telling people at the bowling alley that I can’t keep score because I am still working on my GED and the numbers confuse me.  Might as well--some damned student outed me, anyway.
I resolve to stop answering the enormous amount of hate mail I receive from the state of Arkansas.  I have no idea what I did to upset people in this state, but most of their email starts with something along the lines of, “You will never see the sweet face of Jesus...”  Actually, now that I think of it, I did write one or two blogs about religion.
While I am at it, I resolve to write no more blogs about midgets, blind people, nuns, or retarded people.  At least until they develop a sense of humor.  I might write about a short blind retarded nun, but definitely not if she has breast cancer. Wow! Did I ever receive a lot of shit about that one!

I resolve to stop telling a certain faculty member that the best way to reset her laptop is to take her hands off the two white knobs, hold the laptop upside down over her head and shake it vigorously.
I resolve that the next time a failing student asks me (three days before the final exam) what he has to do to get a passing grade in the course, not to tell him to invent a time machine, go back about thirty years, and introduce some intelligent men to his future mother.
I resolve never, never again to let my wife take the cat with us on a car trip.  She said she had given the screaming furball a tranquilizer.  It turned out that I needed a double Xanax with a scotch chaser.  The whole way to Albuquerque, all I could think about were cat jokes.  (What has two legs and bleeds on the backseat?  Half a cat on a road trip.)
And lastly, I resolve not to take any of these resolutions too seriously.