Cleaning my desk the other day, I found an antique.  A picture of a pinewood derby car my son and I built for the Cub Scouts.  What’s-His-Name and I learned a lot from that car.  One of the things we learned was that we didn’t particularly like the Cub Scouts.

Actually, we built two cars.  I have no idea what happened to the first car, but looking down at the photo of little chunk of blue painted wood, the whole story flooded back, and for a little while there, I had an eight year old boy standing next to me. 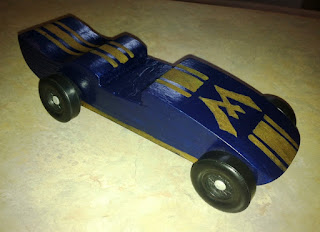 When What’s-His-Name joined the Cub Scouts, I remember going to the meetings at the elementary school lunch room.  I wonder how many hours I have spent squirming around trying to fit a grown up ass into those little midget chairs?  If you have small children, before they start elementary school, find yourself a good folding chair you can drag along to such meetings.  If you can get away with it, take a hip flask.

That boy was excited.  A moose hunt in Alaska wouldn’t have excited that boy half as much as sitting on the floor of a school cafeteria trying to tie a square knot.   His ratio was about 5 granny knots to every square knot, but we were both proud of them.  I never told him that was about my square-to-granny ratio, too.

Then they announced the pinewood derby competition.  We had a month to turn a $2.50 kit into a prize winning racecar.  The rules were fairly simple.  Each boy had to build it himself, under supervision of his father.  There was a weight limit, a maximum length, and a few other assorted rules that escape me twenty years later, but that was about it.

What’s-His-Name had a lot of fun putting that model together, and I can honestly say he did it all himself, while I hovered overhead.  And I can prove it, too.  That car was as ugly as a mud fence and as slow as a lame Mississippi mud turtle.  The nails holding those wheels on were as crooked as a congressman.  We were both proud of that car, but it came in dead last.  And even my son could tell why.   His was the only car in that competition that had been made by an actual cub scout.  The rest of those cars were perfect.  They were fast, perfectly balanced, and beautifully painted.  One father told me privately that he had paid $200 for his son’s car.  About the only thing most of the actual scouts had done was put their cars on the track.

I can still remember the look my son gave me when that race was over.  He was only eight, but he clearly understood that we had been snookered.  We had been played, and neither of us liked it.

Eleven months later, What’s-His-Name was nine, and we bought the second pinewood derby kit.  And while my son certainly helped build that car, he had a little help.  The “advising” team had a total of 7 advanced college degrees.  It was probably the first pinewood derby car in history that had the weight placement plan calculated by a nuclear physicist.

There was absolutely no problem with the wheels that year.  My son and I had put the nails on a jeweler’s metal lathe and insured they were perfectly round and a perfect match for the wheels that had their cores filled and re-drilled.  The underside of the nail heads had been polished mirror bright.  You could spin one of the wheels on that car and it would turn for an amazingly long time.  And the tread of the tires had been slightly cambered so that only a portion of the wheel actually made contact with the track, thus reducing friction.  His mother, the Doc, helped him paint the car.

Needless to say, What’s-His-Name won.  That car ran like a scalded dog.  And my son could have made a tiny sum that night.  Several fathers wanted to buy it, but he didn’t want to part with it.  He still has it.

My son and I both learned something from those races.  The children aren’t always the childish ones  when fathers and sons play together.