Two weeks ago, we left our poor Hunter Gatherers in a precarious condition: they had become farmers.  Unfortunately, early farmers had all of the work and few of the benefits.  Surprisingly, for centuries, farmers didn’t even eat very well. At least the hunter gatherers had a naturally varied diet.  For centuries, our poor malnourished Paleo-agriculturalists subsisted on the ragged edge of failure.

It will take a long time before our farmers acquire the knowledge necessary to become successful, but eventually, we see activity that even today would be recognizable as farming--raised terrace farming using digging sticks.  While most of the crops sound familiar—corn, squash, beans, and peppers---we might have trouble recognizing them.  These are the cultigens (original variety) of the crops we enjoy today.

The original ears of corn contained only 5 rows of kernels and were about the same length as today’s okra.  Today, on Facebook, several of my friends are very concerned about genetically modified organisms.   Through thousands of years of selective breeding, all of our crops have been genetically modified.  If you want to only eat non-GMO foods, you are going to have to restrict your diet to water and salt.  I can’t think of anything else in the store you could eat.

There were very few animals on this farm, for very few animals in the new world were domesticated.  A few small dogs were used as food—though technically, the size of the animals violates the dog rule.  To qualify for the dog status, the animal has to be at least 10 pounds.  Under that, and it is called bait.

In all the new world, only a few more animals were domesticated:  turkeys, llamas, alpacas, honey bees, and guinea pigs pretty much round out the list.  And the last animal was used for food, just like the dogs.  Every other animal that we associate with farms came from the old world.  Do you remember the old kindergarten song, Old MacDonald Had a Farm?  If you can sing about the animal in that song, our farmer did not yet have it.  EIEIO. 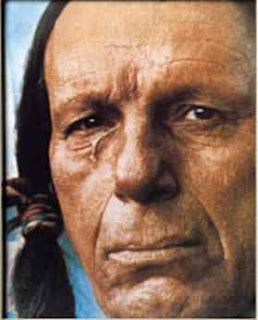 Did our simple farmers live in harmony with nature?  (You know, kind of like Iron Eyes Cody in the classic Keep America Beautiful public service announcement where after watching people littering along the highway, a single tear forms in his stoic Native American face?  Well, probably not like him, since he was actually Italian and just looked Native American.)  The idea of Indians living in harmony with nature just never seems to die.

Native Americans exploited their environment to the limits of their technological abilities.  If you remember, a couple of weeks ago, our natives hunted wooly mammoths to extinction.  And if you need more proof, look at ‘Head-Smashed-In-Site’ in Alberta, Canada.  The Indians put up stone markers along a trail for over five miles so they would remember the trail they used to stampede herds of buffalo off a cliff.  Far more animals were killed than were butchered—and the site was used for seven thousand years.

Eventually, our small gathering of farmers will be successful enough at farming that there is time for other activities:  pottery, basketry, and weaving.  Eventually, we see the signs of regional variation and artistic differences.  And sometimes these items are found far from the point of manufacture, meaning that trade between our groups has developed.

Our natives have almost no metal, no system of writing, no beasts of burdens, hell—these rock-biting and bone-tossing savages don’t even have digital watches.  Obviously, this is a primitive society.  At least you might think so.

Do you know what an epiphany is?  That is the wonderful moment when you are studying—usually alone—and suddenly you understand something.  It is your “Eureka” moment when you have a breakthrough and understand something.  An epiphany is the second best feeling in life—and if you don’t know the best feeling in life, you probably shouldn’t be reading this blog.

My epiphany was when I suddenly understood that everyone on earth, anyplace and at any time had far more in common with me than there were differences.  The more I studied a people, the more I realized they were just like me.  If you could really get inside the heads of our Paleolithic farmers, we would probably realize they worried about their children, their spouses, and they work they had to do.  In short, they were just like us.

Every culture has rituals, taboos, and customs.  There are no primitive cultures, only primitive levels of technology.  And even primitive technology need specialized knowledge.

You and I can probably both make fire from two sticks, but only if one of them is a wooden match.  Our Paleolithic farmer knows the answer to all of this, and more.  His life is probably just as complex as yours, just different.
Our Indians have not yet started making communities, but we will cover that in a few weeks.

Oh yes, heat the copper until it is red hot, and then you can hammer it again.  Oak trees contain tannin, and if you don’t know which ones are the oak trees, just chew bark off of every tree you find.  You’ll know when you find an oak tree even if you have never tasted tannin before.  Blanche the acorn flour with boiling water that you got by adding and removing  hot rocks to the clay pot until you have the temperature you want.  But you knew that.