It is the time for Halloween, so I thought I would share a few ghost stories.  In Mexico (and for that matter New Mexico) there is an oft-told story about a ghostly woman who lives near water.  Depending on who is telling the story, this phantom is a danger to children, to young men, or to teenagers.

Where did the stories of La Llorona start?  Was it Medea in ancient ?  Lorelei in ?  Every culture seems to have a story of a woman who lures sailors to their grave.

Or is it an Aztec tale?  In 1502, in the Aztec capital of Tenochtítlan, the goddess Cihuacoatl took the form of a beautiful lady draped in white garments.  Throughout the night she walked the streets crying out in misery, “Oh my children…your destruction has arrived.  Where can I take you?”  Many believe that Cihuacoatl was speaking of the future conquest of Mexico by the Spaniards.

Maybe it’s just a universal desire of mothers to scare their children away from the water.  Whatever the reason, every location has its own version of the story, so I thought I would share a few of them from the southwest.

La Bruja or the Witch

Sofia lived in a small town in Mexico--the kind of place where, if you weren’t married by the age of 15, you were an old maid.  Sofia was already 19 and still single, even though she was beautiful.  Unfortunately, Sofia was also egotistical and selfish and the gossips of the town whispered that she was actually a witch.

Then Sofia met Luís.  He was charming, handsome, and soon the two were lovers.  Within a year, Sofia had a baby boy who was the very image of Luís.  Shortly after the child’s birth, Luís disappeared.  Sofia was heartbroken, but the local people blamed her, saying she had run him off. 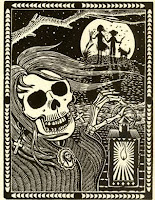 One afternoon, Sofia overheard two men talking about how they had seen Luís in a nearby town, with another woman.  As they laughed, grew into a terrible rage.   She ran to the local lake and pushed her struggling infant underwater and held him there until he stopped moving.  When Sofia realized what she had done, she stayed by the lake, wailing and refusing all food until she passed away.   Since Sofia’s death, several small children playing near the lake have vanished without a trace.

Laura was an attractive girl from a desperately poor background.  As soon as she could walk, she began working to help her family.  When she was 16, she got a job in a store where she soon met Miguel.  Miguel was everything poor Laura had never known—he was a rich and handsome man who relentlessly pursued her until she agreed to go out with him.  Within a few weeks, he asked her to marry him.  Trembling, Laura said yes, and that very night she made love for the first and only time.

But after that passionate night, Miguel refused to see her again.  Laura soon discovered she was pregnant, and when her parents found out, they threw her out of the house.  She was penniless and her poor poor baby was born premature, weak, and malnourished.  Laura had no other choice; she went to Miguel and begged for his help.  Miguel laughed at her, saying the baby wasn’t his.

Laura walked to a nearby lake and slowly walked into the dark water until both she and the baby disappeared.

A few weeks later, Miguel, too, mysteriously disappeared.  And since then, men who have been out drinking or cheating on their wives have regularly disappeared; all having been last seen following a mysterious woman through the winding streets of the dark city.

Linda grew up in a tough neighborhood, so she had to learn early to use what she had to get what she needed.  A single mother, she worked as a waitress and was desperately tired of her dead-end life.  One night, she met Alejandro, a sexy man with a good paying job.  He was alone and an easy mark for Linda, who easily seduced him.

Within weeks Linda was talking about marriage.  Alejandro said he couldn’t marry her because there were always prying eyes--he didn’t think he could open up to Linda until they had some privacy.  Since Alejandro had always avoided being around the baby, Linda decided to get rid of the obstacle to her happiness.  A week later, the poor baby’s body was found in the river.

The day after the funeral, Linda told Alejandro that since she had taken care of the problem, now they could be married.  Alejandro was horrified and said he had meant that his mother was always watching the couple.

Linda turned into a crazed animal, screaming and swinging her arms at Alejandro.  Suddenly, she grabbed a knife and fatally stabbed both Alejandro and herself.

To this day, small children playing near the river hear her cries and run from her screams.

Barbara was a school teacher in a small town.  Alone, and desperate for someone to befriend her, she fell in love with the school’s coach.  Strong, confident, and assured, the coach assured Barbara that the most important thing for the school to do was focus on dodge ball. 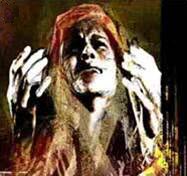 Soon, Barbara was neglecting her classroom and the pupils of the school were spending more and more time in the playground.  Barbara was worried, but the coach assured her, that eventually the people of the town would realize how important dodge ball really was to the students.  If the school could beat the dodge ball team from a nearby town, the coach was sure the parents would be appreciative.

Barbara ran to the school, and went to the far end of the playground, where the duck pond was located.  To this day, no one has seen her, but occasionally, students playing near the pond still her wailing, “But we could have won at dodge ball!  I know we could have—just one more year!”

While no one else has disappeared yet, we all know they are going to.  It always happens that way.