The Boy Scouts of America has reached a half-assed decision this week.  Over 60% of the 1400 voting scoutmasters have decided it is okay for gay boys to be scouts.  Presumably, the other 40% still prefer ritual purification by burning at the stake—and if you can start the fire using only one match, you earn your woodcraft merit badge.

Still, I suppose this is a giant step forward for the scouting organization.  Finally, after more than a hundred years since scouting began, the organization has decided that some boys are not inherently evil.  The founder of scouting--Lord Baden-Powell (who many historians believe was a homosexual)—would be proud.

Still, there seems to be one final step for the organization to take—scoutmasters still have to heterosexual.

So, this is the way it goes.  A young boy becomes a Cub Scout and starts earning those merit badges.  He buys the uniforms, attends the meetings and goes off to camp every summer.  As he becomes older, he becomes a Boy Scout and then an Explorer.  If he works hard, after many years he can become an Eagle Scout—the epitome of scouting.  Then, when he turns 18, he is thrown out of scouting because his sexuality has made him unfit to be a scoutmaster and have contact with his friends from the day before.

Something is wrong here: I thought the purpose of scouting was to turn good boys into good men.  The day before that 18th birthday, that young man is a shining example to young boys everywhere.  Then one day later, the scouts have no use for the degenerate pervert.

Perhaps it might be instructive to remember how scouting came to the United States.  (Do you feel a history lecture coming on?)  Over a hundred years ago, when scouting was alive and well in England, but had not yet crossed the Atlantic, William Boyce, a Chicago publisher, visited London.  This was back in the days when the humidity rising from the Thames River valley would combine with the dense smoke of innumerable coal fires to produce the infamous London fogs.

Boyce ventured out into the city one night and immediately got lost in the poorly-lit twisting streets.  Suddenly, a young boy appeared in the gloom and led the publisher through the dense fog to his destination.  When Boyce tried to give the young boy a tip for his service, the boy, now known as the Unknown Scout, refused the money and said that he was just doing his daily good turn. 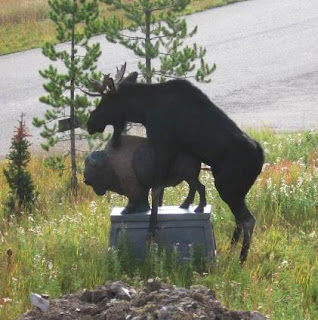 Boyce later met with Lord Baden-Powell, learned more about the scouting program, and when he returned to the United States, started the Boy Scouts of America in 1910.

That story of the Unknown Scout is, paradoxically, well known.  The organization later awarded the young boy The Silver Buffalo, the highest award given by the BSA.  At the ceremony, a large silver buffalo statue was accepted by the Prince of Wales in his stead.  The prince thought so highly of the statue that he left it in America when he returned to England--presumably because his luggage was already overweight.  (I can’t really blame him, as I wouldn’t want the statue myself.  Today, the ugly hunk of metal is on a brick pedestal in Gilmore Park behind the White House.  I tried to find a good photo of the statue, but all I could find is this one.  Is that “statutory” rape?)

Less well known is exactly what happened when Boyce met the Unknown Scout.  Let’s go back to that cold winter night in 1909 when Boyce was standing lost in a pea soup fog.

“Begging your pardon, guv’nor.  Are you lost?” said the Unknown Scout.

“Why, yes, I am,” replied Boyce.  “Do you know the way to the Dorchester Hotel?”

“Surely.  But first, are you a poofter?” asked the boy.

“A poofter.  You know guv’nor… an arse bandit.  A shirt lifter.  A bum burglar.”

“Then Bob’s your uncle, guv’nor.  Follow me,” said the Unknown Scout.