On several occasions, I have written about my bewilderment concerning the differences between the way men and women go shopping.  Personally, I think men are hunters.  If we need a pair of jeans, we drive out to the game preserve (Sears), track down our prey (admire the power tools on the way to the clothing section), kill the pants with a credit card, tie it to the truck, then drive it home.   Women are gatherers, which means they have to walk from one end of the mall to the other, just to see if there is anything worth taking back to the cave.  For most men, this is just weird.

Strange behavior aside, men can generally put up with this. Check out the women’s clothing section of any large department store and inevitably, right in the middle of the racks of dresses, there are a couple of chairs for a bored husband to patiently sit and play video poker on his cell phone while his wife tries on dresses.  (For the life of me, I cannot understand why there aren't more bars at shopping malls.  They could be daycare for husbands.)

There is, however, one kind of store that is beyond male understanding.  The craft store—whether it is Hobby Lobby or Michael’s—is a bizarre world where no man ever feels comfortable. To be perfectly frank, the entire store is filled with useless crap.  For the life of me, I do not understand why any man would willingly set foot in a store full of plastic plants, unpainted plaster animals, and ugly furniture.  Frankly, I would trade the store’s entire contents for a set of six-point socket wrenches.

Why do these stores even exist?  Who buys packages of 2000 Popsicle sticks?  Who needs a five-pound can of silver glitter?  Is there any real need for an endless collection of cute rubber stamps?  Why do they sell Christmas decorations all year long?  Sooner or later, most of the poor men forced to accompany their wives to this store end up on the glue aisle.  Glue seems to be the only useful item these stores sell.

Since every single item in the store seems to be an incredibly cheap import, these stores actually must be some form of Asian plot to rob American men of their will to live.  Otherwise, they would realize that they could vastly improve their sales by offering just a few items of interest to men.  Add a few tools, or barbecue grills.  Surely, someone must scrapbook Playboy centerfolds.  I could patiently wait in that aisle for a loooong time.

Men, since these stores refuse to cater to our needs, you should do as I do to pass the time.  Find the section of the store that sells plaster of Paris architectural columns, and then tell a sales clerk that you have to speak to the manager.  When he arrives, point out to him that every single column in the store is mislabeled.  I have no idea why, but invariably the Tuscan columns are labeled as Corinthian, the “Doric" columns are actually Ionic and so forth.  Tell the manager that this insensitive mislabeling is deeply insulting to your race, your pagan religion, and your culture.  Trust me, this will use up at least half an hour.

What?  You don’t know one type of column from another?  I can help you.  Luckily, I have taught countless classes of Western Civilization.  And as every student is told, the reason that every student must have Western Civ inflicted upon them is so they can become culturally well-rounded—and NOTHING marks a cultured person more clearly than the ability to pedantically rant about columns.

“Lookie here,” you can say.  “Notice the stylish grace those Corinthian columns lend to yonder mobile home.”  This will amaze and impress your friends and relatives.  That degree in the Social Justice in Reality Television wasn't a waste of tuition after all.

Let’s start.  We will look at our columns from the simplest style to the most complex.  As you can see from the illustration, Column A is a simple smooth-sided round column—this is a Tuscan column.  (For the grad students among you, this a Roman form commonly employed in military buildings, warehouses and docks. The simple design of the Tuscan column facilitates easy construction, so it is very commonly used in modern architecture.)  Tuscan—Get it?  Got it.  Good! 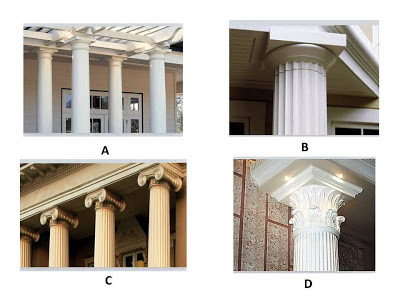 Column B is only slightly more complex.  This is a Doric Column and it, at least traditionally, has 20 flutes running from the top to the bottom.  (Grad students, this is a Greek column named for the Dorians who developed it.)  Any dork can remember Doric!

Column C indicates the Ionic column.  This one is really simple--just take a Doric column and add the little scroll-like capital on the top of it.  (Grad students, this type of capital is known as a volute, and was developed in Ionia.)  Ionic—it would be ironic not to remember Ionic.

Our last column, Column D, is the easiest to remember. The Corinthian column is a fluted column that wears a leafy hat.  (Grad students, it usually has 24 flutes and while it was developed in Greece, it was the Romans who popularized it.  If you want to be especially pedantic, you can watch for columns that have both the Corinthian petals and the Ionic volute.  Invariably mislabeled Corinthian, when you combine the two features they are more accurately called Composite.)  Lots of flutes and a leafy headdress mean Corinthian.  Right!

So in order of complexity, they are smooth, fluted, flutes with a scroll, and flutes with leafy petals. It is easy to remember this progression of complexity.  But how to remember the order of the names?  They are Tuscan, Doric, Ionic, and Corinthian.  More simply:  T-D-I-C.   Or as anyone can remember:  These Dummies Is Columns. I doubt you will ever forget it.

Now that you are an educated sophisticate, go annoy the manager at Hobby Lobby.