After The Doc graduated from four years of medical school, we moved to Galveston Island for seven years while she did her surgery residency.  Little did she realize that the fastest way for a really impressive career in medicine is to do three years of law school and get elected to Congress.

Why Galveston?  I could say that it was because Galveston had the only state hospital in Texas and was home to a premier medical school.  While true, these weren't the primary reasons.  The Doc and I had gone to the University of Houston and on several memorable weekends we had driven my Barracuda the 50 miles down to the beach in order to watch the submarine races.  We thought we "knew" Galveston.  We didn't---we only knew where to find a fairly deserted beach.

Moving to Galveston was fairly easy because we owned several thousand books and very little furniture.  We loaded a U-Haul truck and had it tow our "classic" Ford pickup to Galveston.  By the time we finally reached the island we were almost exhausted.  We had rented an antique house close to the medical school.  The neighborhood was ancient and full of homes built in the nineteenth century.  At the time, we naively believed that these old homes were still standing because they had been built so well they could withstand the hurricanes.  Later, we learned--the hard way--that any house still standing just hadn't been hit.  Yet.

It was June, hot as Hell, and as humid as only an island can be.  And it was hard work unloading that truck.  There have been a few times when I think we own entirely too many books.  By the time we got that truck unloaded, The Doc and I were definitely exhausted.  That old house was a hothouse, clogged with boxes and the electricity wasn't going to be connected until the next day.  We decided to ignore the condition of our house and go for a walk.  We were tired, dirty, and sweaty, but more than anything else, we needed a break.

The neighborhood was wonderful.  It rains every damn day on that island, so the lawns and the gardens are the greenest you will find in Texas.  The magnificent old antebellum houses, the wrought iron fences, and palm trees along the sidewalks give parts of the town a beautiful, perfectly landscaped appearance.

Just a few doors down from our house was a huge house with a large extended porch.  We were to later learn that the house dated from before the Civil War and that the porch had been used for illegal slave auctions.  While Congress had decreed that no more slaves were supposed to be brought to America after 1808, evidently a few slaves had been smuggled into the country illegally from the ships at the dockyards a half-mile away.  There was a great debate going on in the town when we first got there--the city fathers wanted to restore the home as a museum while the majority of the town's African-American residents thought this last vestige of slavery should be destroyed.  The debate, which at times grew quite heated, was interrupted by the sudden total destruction of the house by arson.  As a debating tactic, this was pretty much the last word.

As we walked down the street, we came across a magnificent mansion.  There is simply no way to describe it accurately, but I'll try.  Behind a tall wrought iron fence and a beautifully manicured garden was one of the largest homes on the island.  By comparison, Tara of Gone With the Wind fame was miserable FEMA housing.  As The Doc and I stood there admiring it, a smiling old man with white hair stepped out of the bushes and approached the fence. 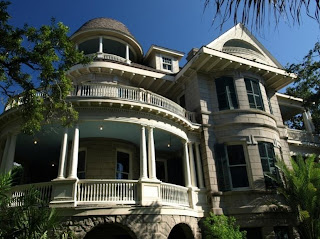 "Would you like to see inside?"  he asked as he unhooked the gate and motioned for us to come in.

After he led us through several grand rooms, he took us to his study and served us lemonade.  This was Captain Julius Jockusch, and the home had been in his family's possession for decades.  Every room was right out of a PBS drama from the Edwardian era--each room had a fireplace made out of a different exotic stone and the walls were of hardwoods from around the world.  And every room had one of those old voice tubes with a funnel on the end.  To communicate with the kitchen, you picked the tube up, blew a whistle to attract the attention of the kitchen help, and then spoke into the funnel to order your mint julep.

"A reporter once wrote about the house," Captain Jockusch explained.  "But the article called them vice tubes."

Captain Jockusch's study was exactly what you would expect in this kind of home---very large, wood paneled and with a large wooden desk.  I still envy the glass-fronted bookcases.  Scattered around the room were several easels holding oil paintings on display.  As I examined one, I suddenly noticed the legible signature in the corner:  Chester W. Nimitz.  All of them were signed that way. 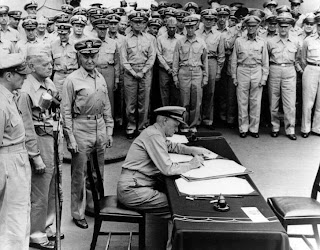 "You knew Admiral Nimitz?  I asked.  I was shocked---Nimitz had been born in Fredericksburg, Texas, and is a legend familiar to every Texas schoolboy.

"Oh, yes." Captain Jockusch said.  He pointed at a framed photo on the wall---the famous picture of Nimitz, on the deck of the U.S.S. Missouri, signing the Japanese surrender documents that ended World War II.

Captain Jockusch pointed to a uniformed young man in the front rank.  "That's me." he said.  "I was one of Admiral Nimitz' aides."

Far from retired, the captain was, I was to learn over the coming years, a perfect gentleman.   He worked with every charity in town, was a director for the ship channel pilot's association, and was famous for his volunteer work on various veterans' commissions all over the country.  Once, over a martini at the Flagship Hotel, he told me he had grown up in the Steves House in San Antonio--another great old mansion in Texas History.

But what I remember most is not the house, or the paintings by Admiral Nimitz.  I remember the kindness, generosity, and hospitality of this man.  He took two strangers off the street and brought them into his home when they were tired and dirty.  A gentleman is someone who goes out of his way to put others at ease.  I have only met a few of those, and Captain Julius Jockusch was definitely one of them.