Syria Does Not Exist

It seems the "President" of Syria has jumped the shark and started to use poison gas on his own people.  The Assad family first seized control of Syria more than 40 years ago and has no intention of relinquishing power as long as it has one citizen left it can murder in the name of stability.

Using chemical weapons on your own people is an offense that must be punished.  The only problem is that the only real opposition in Syria to the murderous bastard president is the Muslim Brotherhood--an entire bucketload of murderous bastards who hate the United States.   While personally, I would advocate that America enjoy a cold one and do nothing but watch the carnage until there was no one left, evidently, our government feels the need to deliver a message to Syria.

I like the US military, but I think it does a poor job as a postal service.  In my opinion, trying to communicate with crazy people by bombing them will work about as well as baptizing a cat.

About a century and a half ago, Queen Victoria had a similar problem with the looney leader of Bolivia, General Mariano Melgarejo.  General Melgarejo had seized power just a few years  before.  While a crowd was gathered in the square in front of the Palace of Government to chant "vivas" to the former leader, Melgarejo came out onto the balcony, dragging the freshly murdered 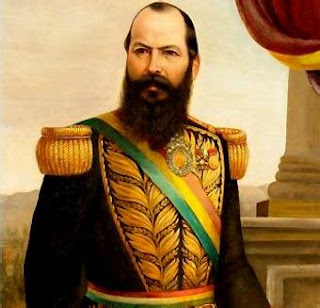 corpse of the president, while proclaiming, "The president is dead!  Who Lives Now?"

As dictator, Melgarejo was ignorant, brutal, and crazy--the hat trick of bad leadership.  When Brazil sent a peace offering of a beautiful horse, he had the animal stand on a large map of Bolivia while he traced a line around the horse's hoof.  All the land enclosed within the circle was given to Brazil as a reciprocal gift.  When told about the story about Caligula's making his horse a general, Melgarejo promptly made his horse a general in the Bolivian army.

General Melgarejo admired the French--mostly because he didn't know any.  When he heard that the Prussians were attacking France, the dictator ordered the entire Bolivian army to be sent to defend Paris.  When one of the dictator's two-legged generals tried to explain the problem of crossing the Atlantic Ocean, Melgarejo exclaimed, "Don't be stupid!  We will take a short cut through the brush!"

In 1870, General Melgarejo held a banquet to honor his new mistress.  When a British diplomat was offered a glass of chicha, he politely refused and said he preferred chocolate.  Obviously, the diplomat knew that chicha is made by partially chewing corn kernels, then spitting them into a jug to allow the fermentation process to start.  (The saliva helps break down the starch.)

Infuriated by the snub, the dictator forced the diplomat to drink an enormous amount of chocolate, then tied the poor man to a donkey and paraded him through the streets of La Paz.  When the embarrassed diplomat returned to England, he promptly complained to Queen Victoria.  The queen, showing only a little more understanding of geography than the dictator, promptly demanded that warships be sent to Bolivia--only to learn from the Prime Minister that Bolivia was landlocked and had no coast. 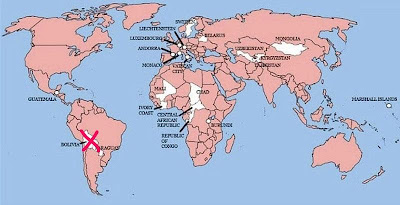 This may be a good point in the story to admit that much of this story--like a lot of Latin American history--has a fairly high concentration of bullshit.  Who knows how much of this is really true?  I can tell you, however, that Bolivia is one of the few countries on the planet that Great Britain has not invaded.  On the map above, the countries in white are those that have not (yet) been invaded by Great Britain.

Furious, Queen Victoria ordered a map to be brought to her.  Studying the map, she quickly located Bolivia and drew a large inky 'X' across the country with her pen.

"Bolivia," the queen announced imperiously, "does not exist."

As far as I am concerned, this is as good a message to President Assad as bombing a few civilians who already hate us.
Posted by Mark Milliorn at 12:01 AM