The Truth About the Assassination

Fifty years ago today, like every other American, I was shocked by the sudden assassination of our  young president.... Boy, I bet everyone is really tired of that line.  Why do we keep repeating that line?  It's not like a lot of people who were older than the president then are still alive now.  Back in 1963, I certainly knew he wasn't that young, hell, he was 46!  I was ten at the time and I knew that 46 was an age where you had probably already picked out your tombstone.

Apropos of Nothing Whatsoever, (I REALLY wish that 5 years ago, I had picked that for the name of this blog!), Talking about the assassination suddenly reminded me of one of the great moments in education.  I was co-teaching a course with another professor.  I won't mention her name, but she had her sense of humor surgically removed during grad school.

In any case, several of our students had experienced  a vocabulary problem while writing on a test about Phillip II of Macedonia, who had been assassinated in 336 BC, possibly by his son, Alexander the Great.  About half the class wrote that Phillip was "assinated."  The next time the class met, I projected a picture of Phillip II.  I gave a brief, but bloody, description of exactly how he died.  Then I clicked a button on the digital presenter and it showed the next PowerPoint slide, one that showed the same picture with a large caption underneath, "Assassinated." 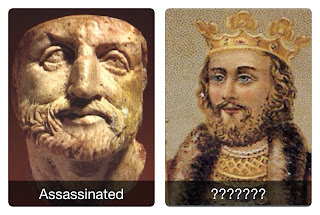 I let the students view this slide for a while, then showed the next slide, one of Edward the II.  Again I gave a brief description of his unhappy life and his very brutal death.  Extremely disliked, King Eddy was imprisoned and eventually murdered.  According to some accounts, a red hot poker was violently shoved up the royal rectum, possibly because it was rumored that the king was a homosexual.

At this point, I clicked the button for the next slide, one that showed the same picture of Edward II, but underneath was the caption "Assinated."  For several seconds, I flicked back and forth between the two slides:  Assassinated and Assinated.  On the next test, every student got it right.  I won't report the other professor's comments.

Where was I?  Oh yeah, 50 years ago.  Strangely I was in the same town as John F. Kennedy--at least for a little while.  We both woke up that morning in Fort Worth.  While I went to class, the president had breakfast, made a brief speech, declined to wear the cowboy hat presented to him, then drove to Carswell AFB to board Air Force One for the 13-minute flight to Dallas.  Yeah, that's right--thirteen minutes.  Nothing is more presidential than flying in on your own plane.

I want to make it plain (pardon the sort-of pun) that Kennedy left Forth Worth safely.  He got shot in Dallas--an event that, for years, changed the town's official motto from "Where the West Begins" to "We Didn't Shoot Him."

And almost immediately, a cottage industry sprang up.  There have been over a thousand books written on who the "real" assassin was.  For fifty years, nut cases with typewriters (and, more lately, computers) have come up with some of the wildest damn theories you can imagine.  He was shot by Cuban riflemen firing up from the storm drains.  (There are still NO storm drains in Dealey Plaza.)  He was shot by the driver of his own car.  (That cost some nut job author some long green: that secret service agent is still alive and promptly sued the author.)  You name it--it has been written.

And the television documentaries that have been made!  Two weeks ago, I set my Tivo to automatically record any show where the description contained the word "Kennedy Assassination."  As I write this, there are over three dozen shows recorded.  Amazing...

These ghouls should all be ashamed of themselves, endless profiting from the assassination of the young president.   Just because there is ca$h in the a$$a$$ination....to....be....made.....  Millions perhaps...How much did Bill O'Reilly make from that book?  And the movie deal? 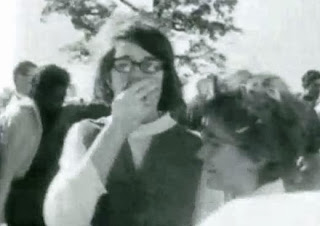 Well, it is high time to finally tell the whole truth and nothing but the truth.  I am sure that all of us have seen those horrendous black and white photos of the crowd outside Parkland Hospital when the news was finally released that the President had passed away.  The camera then slowly pans the crowd, showing the raw emotion of the gathered crowd.  At left, is one of those photos taken from the original CBS broadcast of the crowd outside the Dallas hospital.

Notice how this unknown woman carefully places her hand over her face to conceal her appearance.  Trust me, you cannot watch any of those documentaries without seeing her image.  Could this actually be the true assassin coming to the hospital to make sure she had accomplished her mission?  Hiding in plain sight is the most effective method of not being noticed.  How else did this person get to the hospital so quickly?

And just who is she? 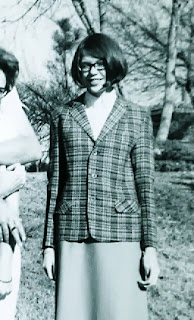 For the first time, I can reveal her true identity.  Observe the photo to the right, taken at roughly the same time.  Does it look familiar?  Notice the thin build, the cat's eye glasses, the short brown hair...  Who is this criminal mastermind?  The photo at the right is The Doc, my wife.

Oh sure, she "claims" she was 100 miles away in Wichita Falls--a claim that that has obviously not withstood the test of time.  Today, more than 50 years after the event, and despite several Congressional investigations and the concerted efforts of both the FBI and the Secret Service, not a single shred of evidence has been unearthed that shows my wife was NOT in Dallas that fateful day.

And consider this: The Warren Report, at 1,354 pages, contains not a single reference to my wife.  A coincidence?  I think not.  The failure of the FBI to even consider interviewing her demonstrably proves she is part of the giant conspiracy to conceal the truth.

This is real proof.  Crystal clear photographs--not blown up sections of a lousy Zapruder film so fuzzy that if you squint your eyes just right you can find an image of anything from a duck to Elvis.  And both of these photos are absolutely provable to have been made in Texas!

I have more details, but I am not revealing them until I have finalized my upcoming book contract.  If something should happen to me in the upcoming weeks, check the thermostat in our home.  Eager to conceal her dark past, The Doc has been trying to freeze me to death for years.
Posted by Mark Milliorn at 12:01 AM