During World War II, General Patton had the dubious honor of commanding the First US Army Group (FUSAG).  The unit was centered in England and the Germans kept a close watch on its movement, since they believed that Patton's army would have a pivotal role in the upcoming invasion.  Reconnaissance planes regularly noted the position of the tanks, the smoke from the hundreds of stoves, etc.  The Nazis knew that the invasion was unlikely to start until Patton's army moved to the docks.

FUSAG, of course, did not actually exist.  The many tents were empty, the few vehicles that actually moved were driven in circles, and the tanks were an inflatable invention of Goodyear--sort of the ultimate "light" tank, but the ruse fooled the Germans. 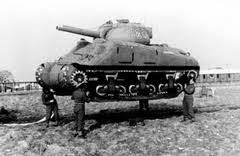 The idea was so effective, so why not use it again?  Besides inflatable tanks, why not inflatable aircraft carriers?  Now that I think about it, Congress may have already co-opted this idea--the federal government seems to be full of things that are inflated: budgets, egos, and our currency.    At the same time, most government policies seem to produce nothing but air.

In these days of tight federal budgets, it is a universal constant that the first budget to be cut is always the military.  Even though the world remains a deadly place, the Defense Department will once again be expected to do more with less.  This will take new, and innovative ideas, so we will have to think outside the padded cell.  Naturally, I have a few suggestions.

Far too much military hardware is way too deadly.  Sure, I know the main purpose of the army is to break things and kill people, but sometimes, you need a measured response, a non-lethal weapon.  For example, suppose that once again our nation is forced to fight France.   There's no need to use real tanks--we could use NERF Tanks.  You know, the foam rubber, soft stuff that lets children play outdoor sports indoors.

Inexpensive NERF Tanks should be easy to make--just take a giant foam rubber NERF body that vaguely resembles a tank (for maximum effect, make them pink) and glue them onto a Chevy Volt.  The government had Gutless Motors build a lot of these useless Go-Karts, and it's not like anyone is actually buying them.   (Yes, I know the Chevrolet Volt is very common in Washington DC, but I no longer care how many people I insult inside the Beltway.  Now that China has stopped blocking my blog, I have more readers in Beijing than in Washington, DC.  Or as we always say in West Texas: 请点击广告!)

We also need to develop Dumb Bombs.  No, I am not suggesting that we return to the technology of WWII, when hundreds of non-guided bombs had to be dropped to hit a single target.  I mean really dumb bombs.  In the event of war, transport planes should fly over enemy territory and parachute in lawyers, university administrators, NPR reporters, and any member of Congress who has lived in Washington for over ten years.  Each of these special troopers should be armed with a portable copying machine and several reams of blank memos.   Suddenly injecting this much stupidity into any country will render it totally incapable of fighting a war, balancing a budget, or setting up a website in less than four years.

This weapon needs to be kept top secret, since if our enemies find out, they will surely object that we are violating both the Hague and Geneva conventions by using weapons that can be categorized as both unusually cruel and a form of biological warfare.

Is there something wrong with our present stealth technology?  Have our enemies developed better radar?  Did Batman successfully sue for copyright infringement?  The Pentaganistagon isn't talking, but I get the sneaky feeling 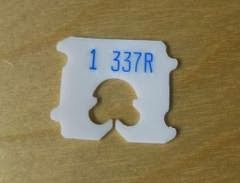 our enemies have figured out how to spot our stealth planes.  Remember the stealth fighter?  Why was the futuristic F-117 mothballed?  Perhaps we need to develop newer, better stealthiness.

Let's start making fighter planes out of those little plastic dohickeys that hold the end shut on a bag of bread.  I think they are technically called bread clips.  Have you ever noticed, if you put one of those down on a kitchen counter, it completely vanishes?  It's like the only force holding them in this dimension is that plastic bag.  If we start making fighter planes out of these things, our Air Force pilots will have to follow a trail of bread crumbs to find where they parked them.  Our enemies will never find them.

With this confusion in mind, I propose that the Navy develop a flying submarine.  NO ONE will suspect this.  Enemy navies will waste a lot of time looking for a submarine underwater, but no one will think to look for it hiding in the clouds.  Naturally, this will render obsolete all those subs that can only hide underwater--but once again, I have a suggestion.

To save money, sell one (or more) of those obsolete attack subs to Greenpeace.  They need it, they can use it, and I would laugh my ass off if Greenpeace actually got one.  Instead of playing hide and seek with Japanese whaling ships, they could just suddenly surface (flying a green Jolly Roger Flag, of course!) and torpedo the whaling ship.  (Greenpeace, if you are listening, I'll be happy to donate to that cause!)

The US Army has started to de-emphasize the bayonet.  I guess the thinking is that you don't need to bring a knife to a drone fight.  Personally, I think they are wrong--we need bayonets--they still work.  It was only two years ago that Col. Gaddafi was killed by a bayonet when it was violently inserted into his brain.  (As a matter of fact, he was "assinated."  See this blog for deeper explanation.). Bayonets are not obsolete and they are cheap, but they need to be "rebranded."

Years ago, I had a student who was struggling on a final exam to tell me what Colonel Joshua Chamberlain did on Little Round Top during the Battle of Gettysburg.  Out of ammo, Colonel Chamberlain received the Medal of Honor for ordering a bayonet charge against a larger Confederate force.  The poor student remembered the events, named the significant players....but simply could not remember the word 'bayonet.'  So, she wrote about a courageous infantry charge with the 'stabby things.'

I thought that was a magnificent answer.  And a fantastic name.  Any enemy would have to think twice about attacking an army equipped with Stabby Things.  Big Stabby Things.

If you doubt that simply changing the name of something can make an army stronger, I have another story for you.  Almost fifty years ago, a small Latin American country got a new El Jefe.   Surprisingly, the dictator happily accepted the US State Department's offer of foreign aid in the form of the Peace Corps.  Unfortunately, when the Peace Corps actually arrived in the Banana Republic, the dictator became irate.

It turned out to be a vocabulary problem.  To the State Department, the Peace Corps consisted of three hippies and a retired music teacher, who would teach the locals how to plant tomatoes.  The dictator, however, had been expecting a real Corps--25,000 soldiers--to help hold the "peace."
Posted by Mark Milliorn at 12:06 AM