I received your letter last night and once again I thank you for the good news from home.  I assure you that there is very little in the way of good news in Washington.  I fear the worst has happened as the supply ship we sent to South Carolina has been fired upon.  There is little doubt that there will be war; this act of violence will set their resolve and like a horse that has tested the bit and found it wanting, there will be no turning them back now.

As I sit here in my office, all I can think think of is the need to find a means to save the union.  And I cannot escape the deep conviction that it was my election that precipitated this vast crisis that threatens to forever rend our great union.  My eyes constantly gaze upwards, beseeching the Almighty for the wisdom to find a path to preserve this union; but all I find is the smoke from the badly laid fire drifting along the curved molding of this oval room.

Men are preparing to march into Virginia and demonstrate that the Federal government will use force if necessary to preserve this union, yet I do not want war.  I wish with all my heart that I could fling open the door, telling the military men who wait outside my office that that there is another path, a way out of this dilemma without bloodshed.  Yet, I know of no such path.  I pray in the days to come, when we meet again, we will all have good news to share.

Professor Grumbles leaned back in his chair, thinking of exactly what to say.  His office--far from vast or even oval--was small, cramped, and filled to the overflowing with books.  He had neither a window nor a fireplace, but did have the luxury of two closets.  His office, located in Frass Hall, had originally been the tiny dorm room for two students.  When the administration of Enema U had decided it was far too tiny for students, they had repurposed the building as faculty offices.  Professor Grumbles would have preferred to have had an office with a window, but took some solace in the fact that at least his office had not been formerly one of the bathrooms--His colleague next door could still feel the remains of a drain under the thinning carpet.

"The paper appears to be of roughly the right age," said Dr. Grumbles.  "While it would have to be tested, I have no doubt that it will turn out to have been manufactured in the middle of the nineteenth century."

"Doesn't that prove this letter is genuine?  I mean, where else could you find 150-year-old paper?"

"It's actually not very hard at all.  There is a huge supply of such paper just across the street in the library.  Forgers carefully cut the fly sheets out of the front of books published at roughly the time period they desire and use the authentic paper for their creations."  As Professor Grumbles talked, he carefully refolded the letter and replaced it in back in the protective envelope.  While the old paper was the size of modern letter stationery, the visitor had wisely preserved the letter in a acid-free envelope designed for archival work.

"But this letter looks like it has been read many times--the paper is worn and well-handled.  It doesn't  look like the flat paper from the front of a book," said the visitor.

"Yes," Professor Grumbles agreed.  "There are ways to make paper look well-worn, however.  One of the favorite tricks of counterfeiters is to place the paper in a dryer with plastic poker chips and old tennis shoes, then tumble the mixture without heat."

Professor Grumbles continued,  "The brown ink looks real, but copying the pen and ink from the same time period is even easier to accomplish.  Still, I am quite certain your letter is not authentic, even though the paper probably was made during Lincoln's lifetime."

Professor Grumbles leaned forward and handed the letter back to his visitor.  Actually, he had spotted four reasons why the letter was a forgery.  (Before reading further, how many can you find?)

"Let's start with the easiest to spot:  In Lincoln's day, the President's home was usually called the 'Executive Mansion'.  It wasn't until the early twentieth century, when President Teddy Roosevelt was in office, that the name was changed to the White House," said the professor.  "And while the house was always located on Pennsylvania Avenue, it was not until the Grant administration that a number was added to the address." 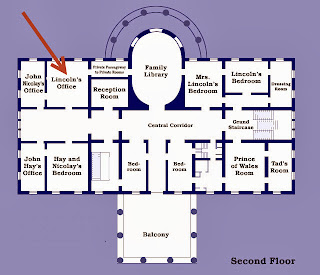 "During his term, Teddy Roosevelt added the West Wing to hold the President's office.  Prior to that, presidents used several different rooms in White House as offices; frequently, it  was the large oval-shaped room above the Blue Room.  Lincoln, however, used a rectangular room on the second floor as his office."

"In addition, your letter is the same size as modern letter paper: 8.5 x 11 inches--a size that was not used until about the time of the First World War.  It became a standard for use in  typewriters--something the White House did not possess until Lincoln had been dead for twenty years.  And it was not made the standard size for government letters until the presidency of Ronald Reagan."  Professor Grumbles smiled apologetically at his guest.

"I'm sorry, but the letter cannot possibly be genuine." said the professor.

"I paid good money for this!  What am I supposed to do now?" asked the visitor.

Professor Grumbles smiled at his visitor.  "Well, it is up to you, but I would contact one of the better auction houses--say, Sotheby's in New York.  I'm not sure what this letter is worth, but I'm sure it is quite valuable.  This is undoubtedly a Joseph Cosey forgery.  Cosey was the alias used by the renowned forger, Martin Coneely.  He was famous for forging the works of Lincoln, Twain, and Thomas Jefferson.  Both the Library of Congress and the New York Public Library have permanent collections of his work.  Judging by that last line, 'Yrs. Truly", I would say that it is one of his early works."

"What?  The letter is really worth something?" the visitor asked.

"Oh yes.  Probably more than if it were actually written by Lincoln."