Innovation usually occurs where it will be most rewarded.  Or as Emerson said, "Build a better mousetrap, and the world will beat a path to your door."


Emerson, of course, actually never said any such thing.  In the 1880's, a couple of writers evidently lost their notes, and dramatically condensed what Emerson actually said, "If a man has good corn, or wood, or boards, or pigs, to sell, or can make better chairs or knives, crucibles or church organs, than anybody else, you will find a broad hard-beaten road to his house, though it be in the woods."


However condensed and turned tawdry with mice, the sentiment is true.  Innovation leads to lower production cost, and higher profits. 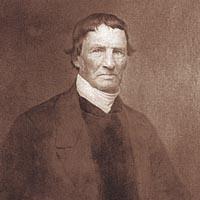 The potential profit drove Captain John Ames to break British Law.  As a resident of Massachusetts in 1774, he was well aware that the 13 colonies were prohibited from manufacturing industrial products that would compete with the mother country.  Great Britain was a strict adherent to the mercantile system—colonies were to manufacture nothing and export only raw materials in exchange for the manufactured goods that the mother country would produce.  For England, this meant cheap raw materials and a ready market for its finished products.


For the colonists, however, it meant a chronic shortage of goods that could only be purchased at a high price.  The only alternatives, were poor quality  products that were made by hand.  In a colony that was largely agricultural, this meant a lot of poor quality farming implements—including shovels.


Shovels are some of the oldest gardening tools in the world, dating back thousands of years.  Archaeologists believe that the first shovels were the scapulae of oxen and bison.  Today, some of the Inuit—the people formerly known as Eskimo—still believe that the best shovels for snow are fashioned from walrus scapulae.


Drawings of wooden shovels date back thousands of years, and the remains of Bronze Age shovels at least 3100 years old have been found.  All of these shovels have one thing in common: they are really poor shovels.  It is not until about 500 years ago, when iron could be reliably tempered, that lightweight, sharp metal shovels were first made.  However, few of these made their way to America since by the time they crossed the Atlantic, they were far too valuable to use in the damp soil.


This created a perfect opportunity for Ames to reap a profit.  Fashioning a trip hammer powered by a water wheel, he hammered metal shovels out of iron bars.  The business was instantly profitable.  Within a few years, General Washington asked Ames to provide shovels to the Continental Army, and while it would be stretching things to say it the Ames shovel was responsible for the American victory over England, I can safely say that Britain would have refused to sell the Revolutionary Army a single spade.


John Ames employed his neighbors—mostly farmers—to make his shovels between the October harvest and the May planting.  It took twenty men to heat the metal, hammer the shovel shape, reheat the metal, temper the metal to the correct hardness, and fashion a handle.  The Ames company prospered and expanded over time, making it one of the oldest manufacturing companies in the United States.


Ames, of course, had competition.  The shape of the simple iron shovel dates back to Roman times, and there was little different between Ames' shovel and that of any of his competition—until, of course, Ames came up with the 'Ames Bend.'


Since the first wooden shovel, the shovel and handle had been straight.  John Ames saw that mechanically, this was a bad design and fashioned a machine that would bend the rear portion of the shovel—the part where the handle attached.  This increased the leverage of the handle, making the shovel more powerful and more easier to handle.  The world began beating a path to the Ames factory.  The Ames Bend is revolutionary, making an ancient tool far more productive.


About the same time, the company began using higher grades of iron, and then, eventually, steel.  With better metal and better tempering, the shovel blade could be lighter, thinner, and more flexible.  Where the shovel blades used to break, now, they just bent slightly, and then sprang back to their original shape.


The company grew steadily until the 1860's, when once again, a war provided the company with new opportunities.  This time, it was President Lincoln who personally asked Oakes Ames (grandson of John Ames) to provide the Union Army with shovels.  And at the conclusion of the war, as Americans poured into the West, they took the Ames shovel with them to farm, build railroads, and mine for gold. 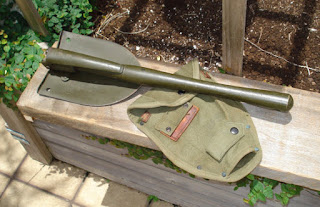 By 1870, the Ames Company and its 500 employees made 60% of the shovels sold anywhere in the world—And the shovels went everywhere.  They helped build canals and construct the transcontinental railroad; they went with Perry to the North Pole, they were present at the Hoover Dam and the Panama Canal, they were used at Mount Rushmore, and NASA bought more than one specialty tool from the company.  During World War II, the company produced 11 million entrenching tools for the American Army.  The company redesigned the shovel for the Korean War, and once again for the war in Viet Nam.


Have you ever wondered how the footing for a telegraph pole was dug before there was heavy machinery?  Ames sold two tools for the job: a shovel for digging and a spoon for dirt removal—each with a ten-foot handle.  (That's not your everyday teaspoon!)


At the end of the nineteenth century, American industry was being revitalized by the new science of time and motion studies.  Bethlehem Steel and the Ames Company cooperated in one such study.  It turns out that the optimum load for a shovel is 21 pounds, and the dish of a shovel should be designed so that it can accommodate such a load—depending on the material being...well, dug.


The 1926 catalog was 80 pages long and listed hundreds of models, of various grades—all with ash handles and the finest tempered metals.  There are snow shovels, coal shovels, manure shovels, ice shovels, ash shovels, and even shovels and spades especially designed for the use of boys.  Appropriately for the time, there were no such shovels for girls.


Ames is still in existence, still making its famous shovel with the Ames Bend—though it would be hard these days to find a shovel for sale by even its competitors without the distinctive bend.


No one yet makes the shovel I really need—the one that will put itself back into the garden shed (no matter where my sons have left it).  I also need one that will clean the damp dirt off its own dish, and one that will resharpen itself, no matter how many rocks have dulled it.


No company makes such a shovel, yet, but when it is finally available, it will undoubtedly be an Ames.
Posted by Mark Milliorn at 12:01 AM