It Really Was That Hot

Depending on who you talk to, my wife and I have been trying to kill each other for years.  To be specific, my wife claims I am trying to poison her, while I know for a fact that she is attempting to freeze me to death.

In summer, The Doc will set the thermostat down below my age, wear hideous wool pajamas and a sweater to bed, wait until I am asleep, steal the blankets, and then turn on the ceiling fan.  Right about the time the room has reached the perfect temperature for aging steaks, she will move to the living room and sleep under a blanket.

In winter, she regularly turns off the heater, opens a bedroom window, steals all the blankets, then relocates to the warmer living room.  I could save myself a lot of misery if I just relocated our bed to the living room.

Not only does my wife regularly steal all the blankets, but in the morning, she accuses me of having deposited them on her side of the bed.  According to The Doc, I am one of the few people in the world with the amazing super power of being able to push a blanket.  This is a skill I probably picked up from the Maya while I was doing research in the jungles of Belize.   I don't actually remember this, but this could be the result of malaria or eating too many overripe bananas.

Note.  I just did a Google search and discovered that I wrote about The Doc trying to murder me with the thermostat six years ago.  You can read about it here.   This evidently means that not only is The Doc a fairly incompetent murderer, but that my memory loss must be progressive—an early victim of Old Timerz Disease.  Eventually, not only will I be able to enjoy reading my own blog for the first time, but I will only need to own one mystery book.

Meanwhile, The Doc claims that I am attempting to kill her with spicy food.  This is a claim that is obviously false, since we are both Texans: she should know there is actually no such thing as spicy food.

Evidently, there is some form of genetic mutation in my wife's Texas heritage.  That sounds cruel, so let's call it phenotypic plasticity that arises in Texans of Scandihoovian ancestry.  (I like that.  It turns out there is a way—at least verbally—to pick up a turd by the clean end.)  The Doc thinks that black pepper is too spicy to consume.  I think I was married before I discovered that black pepper was a spice and not just an attractive way to decorate scrambled eggs. 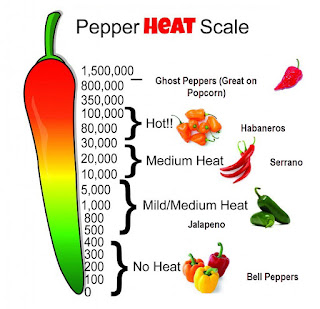 This means that on a regular basis, she claims that the meal I have just cooked is painful to eat, while I am yelling back, "It's not that hot!"  The Doc claims that she is going to use that as the epitaph on my tombstone.  If she actually does, please have the coroner check my corpse for frostbite.

This forces me to either cook two version of the same dish, or remove her serving from the pan before I add any normal seasonings.  For the last forty-odd years, I have been trying to build up her tolerance to what is—at least for this part of the country—normal food by slowly adding mild amounts of seasonings to her meals.  This has been a total failure—she could have acquired an immunity to Iocane Powder by now.

The only thing I have to show for my efforts is my wife's unfounded accusations that I am trying to poison her food.

Lately, I have been baking a lot of bread, especially Parmesan cheese bread and the assorted loaf of focaccia.  I don't actually eat much of the bread, but I enjoy baking it.  Perhaps it is the kneading of the dough I enjoy—it works out a certain amount of frustration I get from working at Enema U.

So, tonight, as I was baking the bread, The Doc called from the grocery store and asked if I needed anything.  I asked for a pound of baby bell peppers, thinking that if I stuffed them with feta cheese, they would make a nice addition to the trout and fresh bread I was planning for dinner.

I like these miniature stuffed peppers, they are fairly easy to make: just add feta cheese, garlic, fresh parsley, and a little olive oil to a food processor and blend it into a smooth paste.  Cut the peppers in half lengthwise, remove the seeds and ribs, fill with cheese, and then heat in the oven.  The multi-colored little peppers look attractive, and there are never any leftovers.

The meal went great....that is, right up to the point where The Doc ate her first stuffed pepper, screamed, and ran for the kitchen.  She reemerged from the kitchen, tears in her eyes, gulping down a large glass of milk.  It took a while, but she finally gasped out that the peppers were too hot.

I had already eaten several of them, and they weren't that hot.  As a matter of fact, I had stuffed a couple of jalapeño peppers for my own enjoyment, and since they had their seeds and ribs removed, even they weren't particularly spicy.  Obviously, however, The Doc was in real pain, and she was quite certain that I had 'done it" deliberately.  But, I hadn't, bell peppers aren't hot.

Now, I’ve been married through five decades, two centuries, and two millennia—long enough to know that if your wife falsely accuses you of something, and even if you can prove you didn't do it, you should apologize immediately.  So, I did—but from the look of her tear-filled red eyes, she wasn’t believing me.

The only thing I could think of was the bizarre possibility that one of the jalapeños had leaked a little juice on one of the bell peppers while they were heating in the oven.  Or, since I had cut all the peppers with the same knife, maybe a little oil had transferred from one pepper to another.  All of this was a little strange. 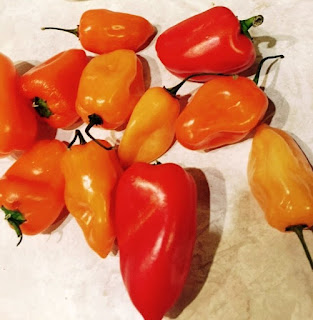 As a loving and caring husband, I kept on eating, while The Doc alternated gulping milk and swallowing whole slices of my cheese bread.  I won't say I was laughing—I knew better—but I was entertained.  Suddenly, I noticed that the yellow bell pepper I had just eaten was a little spicier than the rest.  Not hot, mind you, but it was a little strong, noticeably hotter than the jalapeño.  I ate another yellow one, and it was rather strong, too.

Only after I had gone back and examined the unused peppers, and questioned my wife did I understand what had happened.  At the grocery store, The Doc found the baby bell peppers in the produce section, but all the bin contained were red and orange peppers.  The yellow peppers were in a separate but adjacent bin, so my wife selected a nice assortment of all three colors from both bins.

The red and orange peppers were the very mild bell peppers.  The yellow peppers were habanero peppers, each more than forty times as spicy as a jalapeño pepper.  There is a reason that you don't normally see 'Stuffed Habaneros'' on a menu.  Take another look at that picture above, did you notice the habaneros?

Obviously, The Doc was wrong.  Since she had selected the peppers, it wasn't an attempted murder, it was a botched suicide.