“Andrew Higgins is the man who won the war for us,” said President Dwight D. Eisenhower.

Andrew Jackson Higgins started out in the international lumber transport business, where he bought exotic hardwoods from overseas and transported them back to the United States.  Like most such businesses, his went bankrupt early in the Great Depression when nations began erecting high tariffs to protect their domestic employment.  These barriers triggered worldwide trade wars that all but stopped international trade.

Higgins started a new business: he designed a new boat, the Eureka, a shallow draft boat that was perfect for beaching on sandy shores and muddy river banks.  This plywood boat could operate in just 18 inches of water, and with its propeller protected in a tube beneath its hull, the blunt bow could power over driftwood or floating logs, punch through vegetation, and land on rocky beaches.  As shown to the left, Higgins used to demonstrate the boat’s capabilities by ramming it onto the concrete seawall of Lake Pontchartrain.

The Eureka was constructed of both steel and plywood and was supposedly designed for trappers and wildcatting oil men, and I have no doubt that Higgins sold several for these purposes.  It might just be a coincidence, but this would also have been the perfect boat to bring a few cases of alcohol into the Gulf swamps and bayous during Prohibition.

By 1939, Higgins could see that war was inevitable—a war that would trigger a new boom in the boat-building industry, and with an inevitable shortage of metal, this would mean that a lot of those new boats would be made of wood.  Higgins believed this so strongly that he took all the profits he had made selling boats to affluent trappers and bought that year's entire mahogany crop from the Philippines.

Now, he just had to convince the Navy to purchase his boat.  The Navy knew it needed some way to get men and equipment ashore, but it had yet to select a boat that could accomplish the mission.  When Higgins first attempted to sell his design, the Bureau of Ships refused to even consider a radical design from some Cajun Redneck down in the swamps of Louisiana.

Higgins did not give up, and since the Navy was ready to award a contract for landing craft, the Navy eventually allowed Higgins' boat to compete with three other designs (one of which was designed by the Bureau of Ships).  Of the four boats, the Eureka was the only one with a flat bottom, a blunt bow, and a protected propeller.  The Eureka outperformed all the other craft, whose V-hulls would not allow them to operate close to the shore.  Still, the Navy refused to award the contract, requiring a final test.

The next year, 1940, the Eureka competed with a redesigned ship from the Bureau of Ships—one that clearly had been rebuilt using several features “borrowed” from Higgins.  (It is not called "theft" when the government does it—it is "appropriation".)   However, despite the rebuild, the Bureau of Ships boat could not even finish the test.

The Bureau of Ships still refused to award the contract to Higgins, and that is where this story might end if not for the United States Marines.  The Marines desperately needed landing craft, and frankly, they liked the no-nonsense, hard-drinking Andrew Jackson Higgins.  This was the start of a professional partnership between Higgins and the Marines. 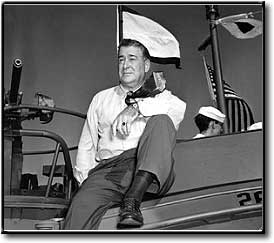 The Marines liked the boats, too, but they had two reservations.  First, could Higgins lengthen his boat to be 36 feet long?  Increasing the length would dramatically increase the carrying capacity of the craft. The Navy, however, insisted that the boat be shorter than 30 feet—necessitating a dramatic cut in carrying capacity.

After weeks of fruitless arguments with both services, a frustrated Higgins asked the Navy, "Why does the boat have to be shorter than 30 feet?"

"Because," said the Navy representative. "That's how far apart we designed the davits."

More than a little angry, Higgins answered, "Maybe we should design davits to fit boats instead of designing boats to fit davits."  As it turned out, the davits only had to be moved to allow the longer boat.

The second concern the Marines had was regarding the difficulty of unloading the boat once it was ashore.  Climbing over the side of a landing craft on a hostile shore while under enemy fire was a guaranteed way to lose a battle.  The Marines were very interested in a Japanese boat that had a ramp at the bow that would drop after the boat was run up onto the shore.  The British Navy had taken photos of the boat in Shanghai before the war started.

After studying the photos in Washington, Higgins phoned his foreman and described the prototype ramp he wanted to see by the time he returned to Louisiana.  The resulting craft, with a 7 foot steel ramp became the LCVP—the Landing Craft Vehicle and Personnel. 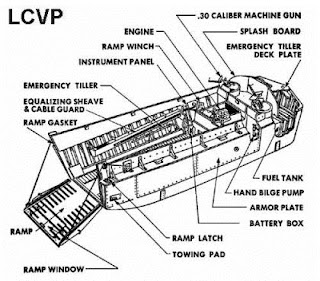 Capable of carrying 36 troops, 12 men and a jeep, or 8,000 pounds of cargo, the LCVP became the most common boat of World War II.  At one point, it was estimated that over 75% of the vessels comprising the US Navy was built by Higgins.

It is impossible to overstate the importance of what many people simply referred to as the "Higgins Boat".  The Allied strategy for winning the war—even in Europe—was a series of invasions against hostile shores.  These amphibious landings are among the hardest and most difficult tasks of the wartime military.

Between 1942 and 1945, Higgins made 23,358 of these boats and by the end of the war, Higgins was making several models of landing craft, as well as PT boats and several types of high speed boats. 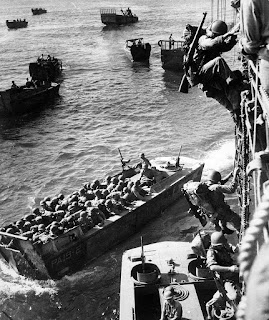 The LCVP was the perfect boat for the job, landing men, vehicles, and supplies on every type of beach imaginable—everything from shores of sand to volcanic ash to rocks.  It landed on coral atolls, on islands, and on the shores of continents, and in locations ranging from the tropics to the Arctic.  The LCVP participated in every single amphibious assault of the war, including some on beaches that were heavily-mined and stoutly-defended.

Socially, Higgins and his company were ahead of the times. Higgins Industries employed over 20,000 people: blacks and whites, men and women, paying them all equally. In turn, the workers produced a world class product that helped win the war.   Or, as President Eisenhower said, “If Higgins had not designed and built those LCVPs, we never could have landed over an open beach. The whole strategy of the war would have been different.”

Perhaps the best praise for Higgins was a left-handed compliment from Adolf Hitler, who referred to the Cajun boat-builder as the “New Noah”.