Historians are often accused of being the most boring people on earth.  Either we are telling you what you already know, or are telling you something you don’t want to know.  Today, I will probably do both.  Everyone knows "The Star Spangled Banner", but few people listen to it.  It is a story about a battle and it is also a history lesson in song. 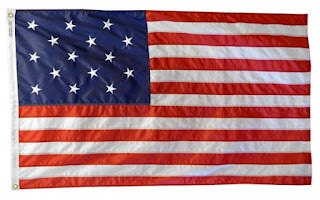 So now let me tell you how it came to be written.

In the early years of the nineteenth century, the United States was caught in a battle between the two great countries of Europe: Great Britain and France.  The primary issues were freedom of the seas and free trade.  A new and inexperienced government was no match for the schemes and plans of the two larger, much older countries.

In particular, British ships were stopping American ships and “pressing” our sailors into serving on their ships.  Relatively few men volunteered to serve on British ships, so this form of kidnapping into what amounted to slavery was common.  British military ships rarely even docked for fear that the crew would escape.

This led the United States to declare war on Great Britain in 1812, even though militarily, America was absolutely no match for the powerful country.  Surprisingly, for the first two years of the war, the new American country did fairly well, in that if it hadn’t won the war, it hadn’t lost, either.

Great Britain didn’t have time to worry about the United States because she was busy fighting for her life with Napoleon's army.  Even as the Americans began mobilizing, Napoleon invaded Russia.  Most military experts expected the diminutive emperor to be successful, and soon in control all of Europe, which would have left Great Britain isolated.

For a while, America held its own, with small naval victories, such as Oliver Hazard Perry's defeat of the British on Lake Erie.  He sent an electrifying message to his country, “We have met the enemy and they are ours.”  It was only a matter of time, however, before the large British Navy would be successful.

Nor was the new nation completely unified in its resolve to fight the war.  Some state militias refused to fight outside of their native states.  New England, hard hit by the economic boycott placed on Great Britain, threatened to secede from the Union.  Many merchants ignored the boycott and continued to trade with their country’s enemy.

The outcome of the war and the fate of the new nation depended on the success or failure of this central prong.

As the British forces neared Washington on August 24, 1814, most of the defending militia fled.  President Madison frantically rode on horseback throughout the night, trying unsuccessfully to rally some form of defense.  The British troops easily moved into the city, burning most of the government buildings.  When they arrived at the White House, they found the dining room set for a fancy dinner.  After they toasted the King with the president's wine, they set fire to the building. 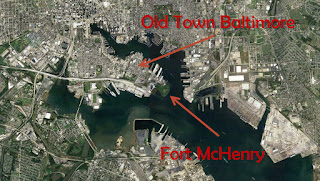 As the British moved toward Baltimore, they found a thousand men blocking the path into Fort McHenry.  Even today, you can look at the satellite photos and see how the fort commands the harbor.  For the British plan to be successful, the fort had to be taken.

As the British moved through Maryland, they had arrested William Beanes, an elderly physician.  His lawyer, Francis Scott Key had boarded the British ship where Beanes was imprisoned to plead for his release.  The British captain agreed to release the physician, but only after the battle for the fort was over, so two Americans witnessed the entire battle from the unique perspective of a British ship.

The attack on the fort began the evening of September 13, two hundred and two years ago this week.

As the twilight deepened, the two Americans could see the American flag flying over Fort McHenry.  But after the sun set, all they could see were the red trails of the British Congreves rockets and the exploding rounds of the British shells.  As long as the fight continued, the two men knew that the fort was still fighting.  A few hours before dawn, the fighting stopped.  Had the fort surrendered?...Or had the British quit their attack?

The only way for the two men to discover who had won the battle was to wait for the sun to rise and see if an American or a British flag flew over the fort.  It must have been a very long night. 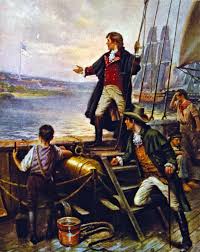 After the battle, Key wrote a poem recounting the night of the battle.  Originally called “The Defense of Fort McHenry”, the poem was published by newspapers across the nation.  Later, he took the poem to a music publisher adapted the it to fit the tune “To Anacreon In Heaven”, a British tune usually associated with drinking.  This was the second time that Key had used the tune to turn one of his poems into a song.  Interestingly, the earlier song had also alluded to a ‘Star Spangled flag”.

"Anacreon In Heaven" is a slightly different tune than the national anthem we know today.  You can listen to it here, to compare:

By the time of the Mexican-American War, the song had already become an unofficial de facto national anthem, but did not receive official recognition until Congress based a bill designating it as such in 1931.

Now that I have explained the background, let’s actually look at the words.  The first verse is usually the only verse that most people know, and it only tells part of the story.  As the song starts, it is Doctor Beanes asking the question.  Here are the words, and you can sing them to yourself.


Oh! say, can you see, by the dawn's early light,
What so proudly we hailed at the twilight's last gleaming?
Whose broad stripes and bright stars, through the perilous fight,
O'er the ramparts we watched were so gallantly streaming?

And the rocket's red glare, the bombs bursting in air,
Gave proof thro' the night that our flag was still there.
Oh! say, does that star-spangled banner yet wave,
O'er the land of the free and the home of the brave?

The ramparts mentioned are the thick walls of Fort McHenry.  Now it is a shame that this is the only stanza that is commonly sung for it leaves us with an unanswered question.  Is the flag still standing.  The second stanza gives an answer, an answer that most Americans have never heard.


On the shore, dimly seen thro' the mist of the deep,
Where the foe's haughty host in dread silence reposes,
What is that which the breeze, o'er the towering steep.
As it fitfully blows, half conceals, half discloses?

Now it catches the gleam of the morning's first beam,
In full glory reflected, now shines on the stream
'Tis the star-spangled banner. Oh! long may it wave
O'er the land of the free and the home of the brave!

"The towering steep" is again, the protective walls of the fort. The answer, of course, is that the attack has failed and the fort is still in American hands.  The grand strategy of the British has failed and all they can do is sail back down the Chesapeake and withdraw.

The third stanza shows Key, utterly victorious, gloating over the British defeat.  We can be fairly sure that the two men did not act this way while on the British ship, or they might never have been released.  This verse is decidedly anti-British, understandably so at the time, but after the two World Wars, when the British were our allies, this verse stopped being sung, but here are the words:


And where is that band who so vauntingly swore
That the havoc of war and the battle's confusion
A home and a country should leave us no more?
Their blood has washed out their foul footstep's pollution.

No refuge could save the hireling and slave
From the terror of flight, or the gloom of the grave,
And the star-spangled banner in triumph doth wave
O'er the land of the free and the home of the brave.

Of course, the reference to hireling and slave refers to the fact that Americans fought as volunteers to a country they owned.  Neither mercenaries, nor men serving their master the king, but they fought as independent men.  In the United States, men were not shanghaied or pressed to serve in ships, but voluntarily joined crews.  Prospective crew members could even inspect a ship and talk to other crew members before enlisting.  Nor were captains of ships afraid to dock their ships lest a crew escape.

When Key wrote these words, the only country in the world with a volunteer military was the United States.  Our soldiers and sailors fought because they wanted to, because they believed in the causes their country was fighting for—not because they were subjects to a monarch who owned them and their country.

The last verse—the most beautiful of the four verses—is a sincere hope for the future.  Though rarely sung, when it is, it is usually sung slightly slower than the other verses, as if it was a prayer.


Oh! thus be it ever, when freemen shall stand
Between their loved homes and the war's desolation,
Blest with vict'ry and peace, may the Heav'n - rescued land
Praise the Pow'r that hath made and preserved us a nation.

Then conquer we must, for our cause is just,
And this be our motto—"In God is our trust."
And the star-spangled banner in triumph doth wave
O'er the land of the free and the home of the brave.

Once again, the song stresses that the Americans are freemen who are fighting for a cause they both understand and believe in.

Now that you know what the song means, I hope you will listen to it with more respect the next time you hear it.  It should mean a lot more to us than simply being a preamble to “Play Ball!”

Note.  Like many of my blog posts, this started out as a lecture for a history class.  Much of the original idea and quite a lot of the material, came from several writings of Isaac Asimov.  After twenty years of giving this lecture, I no longer know who wrote what.  If you liked part of it, it was probably his.