More than the Beast

Previously, I have written about the Presidential railroad cars.  For those of us old enough to remember the Kennedy assassination, we already know more than we wish we did about recent Presidential cars.

That’s the problem:  all the articles I have read lately were about recent cars, all of which were large muscle-bound pseudo-trucks with little character and not much historical interest.  The current presidential limousine is so large that the Secret Service calls it "The Beast”.  Since about the only information that has been released is that it weighs more than seven tons, the name is probably apt.

We are not likely to learn much more about these cars as the Secret Service has announced that when the current limousines are retired, they will either be exhibited—with the doors firmly locked—in presidential libraries or will be blown up with explosives to keep the vehicles from revealing their secrets.  And that is okay with me since I’m not really interested in armored cars disguised to look like  giant Chevy's, but the older cars—the ones you never hear about—have much more character. 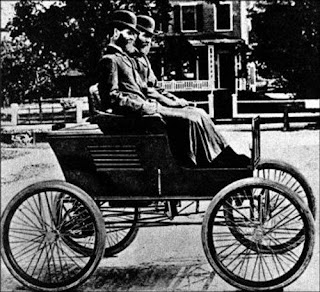 The first president to ride in an automobile was President McKinley, in 1901.  Horseless carriages were still new, and McKinley rode in a Stanley Steamer—and hated it.  The Stanley twins (pictured at left) had recently sold their glass photographic plate business to George Eastman (the founder of Kodak) and then used the funds to start manufacturing steam-powered cars.  Loud, noisy, and smelly—the early models burned gasoline to heat the boiler—McKinley, who personally handled the reins of his horse drawn carriage, was absolutely sure that these contraptions would never replace the horse as primary modes of transportation.

The first car used at the White House, a White Motor Company steam car, was actually purchased by the Secret Service to follow the horse-drawn coach of Teddy Roosevelt.  The president, who was known as a cowboy and horseman, had decided that riding in an automobile would damage his image.  Unfortunately, he later changed his mind.

While campaigning in Milwaukee in 1912, the former president had just entered his open air automobile and, as he turned to wave to the crowd, was shot in the chest by a would-be assassin.  While his heavy coat, folded speech, and glasses case slowed the bullet, it lodged in his chest, where it would remain for the rest of his life.  Undaunted, Roosevelt continued to the lecture hall and spoke for 90 minutes while his shirt slowly turned crimson with blood.  His physical recovery stopped his campaign for weeks just before the election.  The wound so irritated Roosevelt that he abandoned his usual daily exercise program and quickly became obese.

If he had kept to horses, he might not have been shot, and he might have been reelected president, and the US would have entered World War I in 1914 as he wanted, bringing an earlier end to a war that devastated Europe… And if my Aunt Gertrude had wheels, she would have been a tea cart.  If you start playing these “what if” games, you will go mad.  And probably start writing a blog. 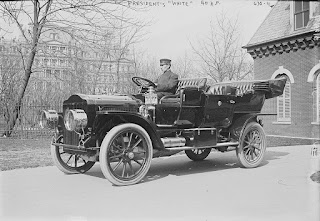 When President Taft came to the White House, he quickly introduced automobiles.  (When you consider that at times, his weight ballooned up to 350 pounds, perhaps this is not surprising.  I can just picture Taft riding a Clydesdale.)  The White House stables were torn down and replaced with a four-car garage, which Taft filled with two gasoline powered Pierce-Arrows, a Baker Electric car, and a White Model M steam car (pictured at right).  The White—the last steam car owned by the White House—was Taft’s favorite after he learned that well-timed releases of steam would keep photographers at bay.

The early Baker electric car was replaced by a 1912 Baker Victoria.  While the two-seater was too small for President Taft, it was used by five First Ladies: Helen Taft, Ellen Wilson, Edith Wilson, Florence Harding and Grace Coolidge.  Edith Wilson was the first First Lady to drive the car personally, and according to her husband, she had a lead foot (Of course the car's top speed was only 14 mph!).  She may have driven the car "fast", but it survived and can still be seen at the Henry Ford Museum.

You will note that up to this point, the White House was fairly green.  While the official fleet was growing, they had two steam powered cars and two electric cars.  After Taft, however, the cars had ever larger gas guzzling internal combustion engines.

By this time, automobiles were common.  President Woodrow Wilson loved the White House cars so much, that he purchased one of the Pierce-Arrows from the federal government for $3000.  His successor, Warren G. Harding was the first president who knew how to drive, and was the first to be driven to his inauguration.

President Hoover purchased one of the largest presidential cars, a huge 1932 Cadillac V-16 Fleetwood Imperial.  While the car might have been practical for the president (who needed a large car for protection), the depression had just started and the president was ridiculed for the extravagance.  Only months after the purchase, Hoover was voted out of office. 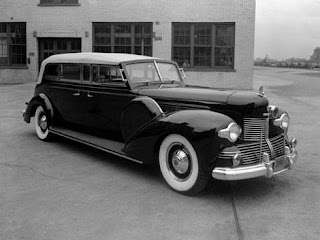 While President Franklin Roosevelt owned a Ford coupe equipped with hand controls, he was normally only able to use the vehicle while visiting his Hyde Park home as it is against Secret Service rules for a sitting president to sit behind the wheel of a car.  His best-known car however was the Sunshine Special, the first presidential car built to Secret Service specifications.

The car, nicknamed Sunshine Special by the press due to the vehicle’s sliding roof, is a 1939 Lincoln K-series equipped with backward opening doors and extended running boards for the Secret Service.  Roosevelt loved the large ten-passenger four-door car, since he could meet the public and make speeches without exiting the vehicle.   While the car was custom-built, it was not armored despite the fact that an assassination attempt had been made on the president while sitting in an open Buick in 1933—an event eerily similar to the assassination attempt on his cousin, Theodore Roosevelt's life. 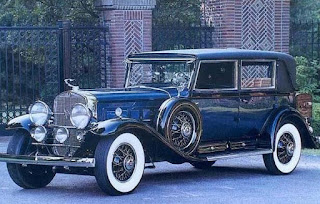 The US Treasury had already confiscated a 1928 Cadillac Town Sedan that was perfect for President Roosevelt.  It already had a ton and a half of armor plating, bullet-proof windows, a siren, and a police radio.  Special flashing lights were hidden behind the front grill.  The luxurious and beautiful car, pictured at right was already equipped with running boards for bodyguards.  Roosevelt used the car exclusively until the Sunshine Special’s modifications were finished.

How had the US Treasury come to own such a vehicle?  They had confiscated it to recover unpaid income taxes.  The previous owner?  Al Capone.

Note.  Like a lot of other stories, this one has a few problems.  While some historians have expressed doubts, this is the story that Michael F. Reilly, one of FDR’s Secret Service agents told in his 1947 autobiography, “Reilly of the White House”.  Who are we to doubt a G-Man?  Secret Service records do show a confiscated car from Capone, but indicate it was a 1939 Packard.  In the end, who cares?  Never let facts ruin a good story.