The Death of the Battleship

For almost five hundred years, the queen of the seas was a battleship.  Beginning with warfare in the Mediterranean, the Muslims were the first to add primitive cannons to galley ships, effectively ending the age-old contest to find the most effective means of conducting naval warfare—ramming, boarding, or throwing things.  Gunpowder artillery—the ultimate method of throwing things—immediately proved to be the most effective method of destroying enemy vessels, but the heavy guns required larger ships.  This was the birth of the battleship.

While ships would still be boarded, and the deliberate ramming of enemy ships would still occur as late as both world wars, it would be the artillery aboard ships that would dominate what the Greeks called "thalassocracy"—the control of the seas—for centuries. 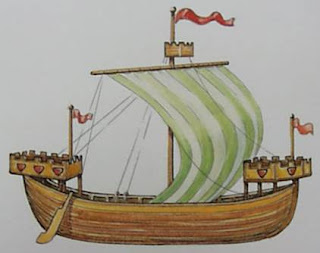 The first use of the phrase “great ship” occurred during the reign of Henry V, in an inventory of his navy.  At the time, these fighting ships were little more than commercial vessels (usually carracks) with fighting castles constructed on their decks to provide platforms for archers, men armed with primitive muskets, or for small cannons.  The term, "forecastle" is a reminder of this age.

Over time, ships grew in size, as did their armament.  By the time of the American Revolution, a first-rate ship of the line might contain more than a hundred cannons, throwing solid iron balls of roughly 40 pounds at a distance up to a mile.  (While the main gun decks of the HMS Victory (commissioned in 1778) used 32- and 24-pounders, the forecastle housed a pair of 68-pound carronades.)

Over the next century, the ships went from wood to steel, powered by steam turbines, gained rifled cannons with fire control systems, and became the behemoths we associated with the term battleship.  By the end of the Nineteenth Century, battleships became the main tool of powerful nations to protect imperial possessions, secure foreign markets, protect trade, and wage war.  Every industrial nation seeking a place on the world stage, sought to build bigger and more powerful battleships.

That the battleship was crucial for the development of an industrial nation was best reflected in the words of Theodore Roosevelt while still the Assistant Secretary of the Navy.

“Oh Lord!  if only the people who are ignorant about our Navy could see those great warships in all their majesty and beauty, and could realize how well fitted they are to uphold the honor of America.”

By the turn of the century, a nation without a battleship was impotent, since an enemy fleet led by a battleship could easily overpower its navy, use its massive guns to destroy ports, and reduce coastal cities to rubble.  Every country had to have its own version of the great ship or forever be at the mercy of its enemies.

So every developed industrial nation did build battleships.  It was the fact that every nation possessed these ultimate weapons of war that produced the terrible paradox.  If your country  must possess a battleship to survive, you did not dare use your battleship in an actual battle with other enemy battleships, for fear that you might lose it, thus losing the whole war.

The reality of this paradox was not actually realized until the Battle of Jutland in World War I when the Royal Navy of Great Britain met the High Sea Fleet of Germany.  While both sides continue to claim victory, neither country sought a reengagement, usually keeping its battleships in harbor for the rest of the war.  Winston Churchill wisely noted that the British admiral in charge was the one man who could have lost the entire war in an afternoon.

Effectively, the battleship had become too valuable to use.  Or as Admiral Jellicoe put it, a naval commander would be a fool to commit a battleship in battle unless he was certain of victory.

This was the high watermark for the great ship.  At the end of the First World War, 118 battleships were in the service of thirteen navies.  By the start of the next war, a generation later, the number of great ships had been reduced by half, even though the battleship had grown to its maximum size and power.

While Jutland was the last real battle between battleships, every country continued to build them in the years between the wars.  You still had to have them, even if you couldn’t really use them.  And while Admirals continued to argue for larger and bigger ships, that were faster, longer, and carried more and larger guns, the entire argument was becoming moot, since the newest method of throwing things at sea—the airplane—was to soon prove the end of an era for battleships.

When World War II started, the supremacy of the airplane over the battleship was proven in two early battles.  At Taranto in 1940, and at Pearl Harbor in 1941, airplanes easily destroyed the largest of the great ships.  The Bismarck was destroyed by obsolete British biplanes.  In 1945, the largest and most powerful battleship every constructed, the Yamato, was sunk from the air.

During the entire Second World War, an exchange of fire between battleships on anything close to the scale of Jutland—never occurred.  The decisive naval battles were fought across hundreds of miles between aircraft carriers who never sighted each other.  Or as Admiral Cunningham said after the destruction of the Italian battleships at Taranto, “Taranto….should be remembered forever as having shown once and for all that in the Fleet Air Arm the Navy has its most devastating weapon.” 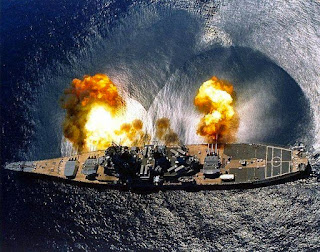 Battleships did play a role in the war, but were primarily used as escorts to invasion fleets and to bombard coastal defenses.  The sixteen inch guns of the Iowa, for example, can fire a two thousand  pound explosive shell 25 miles, devastating any target.

Long after other nations had permanently retire their battleships, only America periodically used them.  After President Reagan reactivated the USS Iowa (right) and the USS Missouri, theirs were the first guns to fire when the US retook Kuwait from Saddam Hussein.  And for a little while, naval tacticians argued that there was still a place in the modern navy for the great ship, chiefly because it would be cheaper to renovate these ships than to build new ones.

With new, fin-stabilized rounds, the massive guns of the Iowa class battleships are capable of hitting targets as far inland as 75 miles, putting over half the world’s population within the range of their guns.  Even today, no other weapon system yet designed is capable of putting more tonnage of explosives on target as fast as, or as accurately as, or for a more prolonged time, than a battleship could.

Even in this role, however, the ships are simply too big, too costly to operate, and require too many skilled men to keep in action.  As a weapons delivery system—essentially still a platform from which to throw things—there are other and more cost-effective methods.

Sadly, in the day of the Exocet missile and in the day of an expensive drone capable of sinking even a great ship, the day of the great battleship is truly over.  For centuries there was a continual drive to make the ships bigger, faster, and carrying bigger and more powerful guns….until the day came when they could not be really used.  The human race had, in effect, created a rock it could not lift.