Rather late in life, The Doc and I have become students again.  Retirement brings lots of benefits, one of which is that we get a tremendous amount of junk mail trying to sell us hearing aids, Medicare supplemental insurance, and silver and gold coins.

Who knew that after you retire, the government automatically enrolls you in the Rubber Band Program?  Every day, the mailman gathers up all the various letters from people insistently trying to sell us crap—along with the daily offer from AARP—bundles it together with a clean, crisp new rubber band, and leaves it in our mailbox.  This program is probably some kind of expansion of the Social Security system (and a jobs program for rubber band manufacturers).

Fortunately, retirement also means increased time to do the things you enjoy, so The Doc and I headed back to school to study Art History.  This is the first time we have taken a class together and we sit in the back of the classroom and flirt and try our best to be disruptive to the children around us. 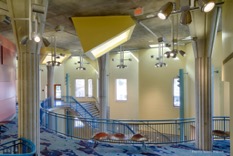 Enema U has located the Art History Department in the shiny, new Performing Arts Building (evidently as some form of cruel punishment for past crimes by the art historians).  Without a doubt, this is the ugliest building in the state (quite possibly, in several states, although Texas does have a possible contender:  a refinery currently on fire).  One of my politically incorrect colleagues refers to it as "The Post-Modern Gay Prison".  Personally, I’ve always thought of it as more of a "Psychedelic Abattoir".   Not only is the building hideous, but it was ludicrously expensive to build (a mere $35 million!).

We have the building because every new chief rodent over in the Office of Moose and Squirrel promptly develops an acute case of the Edifice Complex and has the uncontrollable urge to break ground on a new building, whether the campus needs it or not.  Since it is the unspoken secret yearning of every university bigwig to be hired away from Harvard on the Rio Grande, each new president announces a desperate need for a new building.  (After all, nothing enhances a résumé more than claiming a successful building program).

Currently we are building a new Art Building, since the last head squirrel announced that we had to meet the needs of several hundred art majors.  The faculty—many of whom are crammed into tiny former dormitory bathrooms built during the Truman administration (these were turned into offices by laying carpet directly over the old drains)—shake their heads in disbelief as the actual number of art majors is far, far short of that number.  But, he was President, and he had to build something.

Note.  Just for the sake of comparison, during my years at Enema U, the football coach got new offices in new buildings three times.  The current office is located in a building with a restaurant and bar.

To be fair, it wasn’t only the president’s fault.  When the design for the building was approved, the Dean of Arts and Scandals (formerly an honor graduate at the Olympian School of Cosmetology and Hair Removal) was suffering under severe delusions of adequacy.  No one is really sure if she actually saw the blueprints she approved, however, as she was not quite tall enough to peer over the edge of the table.

So, Enema U built the new performing arts building.  It certainly stands out.  In fact, it's out...standing in its field!   Most of it is rock:  one outside wall is green concrete, while another is red concrete.  Some of the walls are curved, while others have sharp accordion folds and weird angles.  There are lots of windows, but in no discernible pattern.  And there are things that no one seems to know why they are there.  What are those jumbles of purple twisted pipe?  It is either a short piece of playground equipment or a tall rack for five-wheeled bicycles.

Many of the doorways and windows are edged in turquoise.  This custom is seen frequently in Northern New Mexico architecture, so evidently the architect just copied it for a building to be located in Southern New Mexico.  The architect probably doesn’t know that the tradition started among the Pueblo Indians, who believed blue doorways would ward off evil spirits, otherwise he would have used the turquoise paint on the administration building.  A solitary window in back is edged with dark red (this was evidently done to ward off good taste). 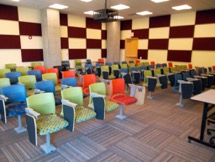 Inside, the building is even worse.  The acoustics of the building were evidently designed to amplify the street noise outside.  Several different types of columns were used, and the prevailing color scheme is MIA.  The main color might be yellow/gold,...with green/black/gray/purple carpet….plus brown, rock-patterned wallpaper.  The theater, despite the cost, is rather small and the audience seats come in a rainbow assortment of colors.  The artwork on the ceiling features a view up a woman’s skirt.

What truly amazes me about the building is that every single time I see it, I find something new to hate.  Truly, this is not exaggeration, the building seems to leap out at you, thrusting a light fixture constructed from a bronzed cow pie under your nose while screaming, “Whaddya think about this?”

I have a theory about the architect...Well, several theories.  One theory is that he hated the school and wanted revenge.

My favorite theory is that, as a child, he was given several different sets of the kinds of toys that were designed to allow a child to construct something.  Our future architect simply mixed together Lincoln Logs with Tinker-toys, stirred in an Erector Set and liberally seasoned the mess with Legos and wooden blocks.  Then, he challenged himself to build something while using every piece of every set.

As a student, I am glad that the lights are usually off in my class while we look at slides of classical art works and architecture.  After class, I can walk away from the building, carefully keeping it behind you.  My fear is that the final exam in the course will consist of a single question.  “Pick any outside wall of this building and explain why the taxpayers should be paying off bonds for the next twenty years in order to pay for this monstrosity?”

I do have one more piece of news to report.  Now that the university computer once again lists me as a degree-seeking student, two fraternities want me to pledge.  I’m not sure if they are hoping to improve their GPA averages, or simply want to pledge someone old enough to buy beer.

Someone should also tell the football coach that I still have four years of athletic eligibility remaining.
Posted by Mark Milliorn at 12:01 AM