Having lived in Houston for only a few weeks, I was eager to explore the new city.  I got off work at 7:00 a.m. every morning and since school was out, I had the whole day to wander around and see the sights.  Eventually I made my way downtown and stared at tall buildings as only a poor, dumb country boy could.

My favorite buildings were the two Esperson buildings.  The Niels Esperson Building was about as ugly a structure as you are likely to find anywhere—so ugly that you can’t help but like it.  The Texas oil man had constructed a building so...unique...that you couldn’t help but like it.  I especially liked the engravings of a steer’s skull on the arches over doorways. I can imagine the wildcatter meeting with an architect, pointing at pictures in a book, saying:  “I want one of those, and one of them, but I want mine bigger.” 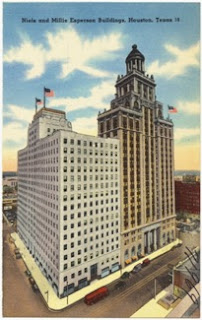 And the building is big.  Well, it’s dwarfed by soulless glass skyscrapers now, but when the building was completed in 1927, it was the tallest building in Texas—an astounding 32 stories tall.

The slightly newer Mellie Esperson Building is next door.  One look and you just know that the wife had better taste but probably wasn’t nearly as much fun on a Saturday night. Her building is plain, boring, and absolutely uninspiring.  No one will remember this building at all, except in contrast to her husband’s.

Eventually, I wandered into the court house, mostly because I had never been inside of one before.  A courtroom opened up and as people swarmed to get in, I just went along with the flow, grabbing a seat in the rear of the courtroom.  It was sort of like visiting a strange church.  People were quiet, and inexplicably sat and stood in unison periodically.

After a while, I figured out that this was a murder trial—one that had started the day before.  As I listened intently to the prosecuting attorney, I became convinced that the woman had, indeed, murdered her husband.  After quite a few hours, I began to realize that—unlike television—this was unlikely to conclude within a single hour (even without regularly scheduled commercials to provide bathroom breaks).

Fascinated, I came back every day for the rest of the week.  I worked nights, slept in the evenings, and was a spectator in court during the daytime.  Eventually, the defense got a turn at bat and I immediately began to believe that, while the wife had indeed shot her husband,  she was not guilty because the sonofabitch had clearly deserved it.

The fact that she had shot him several times was perfectly all right with me.  As my father had taught me, once you pulled the trigger the whole world knew what you were trying to do, so at that point all you could do was show them how sincere you were about it.

Eventually, as court was letting out one day, the defense attorney walked over to the railing and asked me who I was.  I had moved up to one of the front seats to get as close as possible to the defense table in a fruitless attempt  to read the notes the defense team kept writing on the ubiquitous legal pads.

“Are you a student at the law school?”  The man was being kind, as I was barely eighteen and the only people who thought I looked older than fourteen were my draft board.

After explaining that I was a freshman at the University of Houston, the lawyer took me for coffee and we had a long talk.  Actually, I asked questions while I drank coffee and he explained the legal system while smoking a pipe.  I later learned that his pipe and ostrich cowboy boots were his trademark.

At the time, I had no idea who the man was, but he was already famous as Richard “Racehorse” Haynes, the Texas trial lawyer famous for winning acquittals for his clients by putting the victim on trial.  A master of courtroom theatrics, several of his trials have been made in Hollywood movies—an easy task for the screenwriters, as the combination of murder and Haynes always equaled compelling drama. 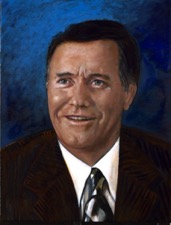 Haynes didn’t appear very imposing, since he was relatively short, and smiled easily.  But, as a youth, he had been the Texas welter-weight boxing champion.  A Marine during World War II, Haynes was decorated for valor after Iwo Jima.  After graduating from the University of Houston, the Army drafted him during the Korean War, where after a brief stint as an instructor in hand-to-hand combat, he served as a paratrooper in the 11th Airborne Division.  Appearances can be deceiving.

As a trial lawyer, before Haynes started handling murder cases, he became something of a specialist in DWI cases, winning an astounding 163 cases in a row.  There are countless stories about his courtroom theatrics:  He electrocuted himself with a cattle prod, had to be prevented from nailing his hand to the defense table, and long before Clint Eastwood got the idea, Haynes cross-examined an empty chair when a crucial witness failed to show up for a trial.  During the infamous T. Cullen Davis trial, Haynes not only successfully won the case by switching the blame to the FBI, but at one point had to be physically restrained by the judge to stop a fistfight with the prosecutor.

His specialty was what he called the “Smith and Wesson divorce”—dozens of cases where a wife had killed her husband.  Haynes, who later introduced the battered woman defense in Texas, claimed to have won all but two or three of such cases.  He claimed that he would have won those other cases, too, if the women charged just hadn’t reloaded their guns and kept firing.  In a career in which he eventually defended forty individuals accused of murder, not one of Haynes’ clients was executed—no mean feat in a state where the state prison, upon constructing a new electric chair, put the old one ("Old Sparky") in the playground at the prison’s visitor center.

That day in the courthouse coffee shop, I knew none of that, but I listened carefully as Haynes compared the modern courtroom to the jousting fields of the medieval ages.  Haynes maintained that six centuries earlier, if a man wanted to prove his innocence, he hired a knight who would fight for his cause.  According to Haynes, every courtroom encounter was a form of single-combat between champions.

The theatrics made headlines, but what won the trials were his brilliant mind and hard work.  Haynes prepared for every possible question that could be raised in a courtroom, and his relentless cross-examinations rarely failed to raise at least a sliver of doubt in the minds of the jurors.  During the Cullen trial, Haynes’ cross-examination of the three key witnesses lasted 17 hours...each.

About a decade after that talk with me, during a seminar at the American Bar Association, Haynes explained his strategy for pleading in the alternative.  “Say you sue me because you claim my dog bit you.  Well now, this is my defense: My dog doesn’t bite. And second, in the alternative, my dog was tied up that night. And third, I don’t believe you really got bit. And fourth, I don’t have a dog.”

When Morganna, better known as the Kissing Bandit, was arrested at the Astrodome after she ran out on the field to kiss Nolan Ryan, only Racehorse Haynes could have been hired to defend her.  Despite the fact that the incident was televised nationally, Haynes got the case dismissed by a laughing judge when he explained that gravity was at fault.  As he explained it, “A 60 inch bust can pull a 112-pound woman into all kinds of trouble.”  The "gravity defense" worked.

There is a long list of notable men who once practiced law in Texas.  Stephen F. Austin, William Barrett Travis, Sam Houston, John Wesley Hardin, Sam Maverick, Judge Roy Bean, Warren Burnett, Percy Foreman, and Racehorse Haynes.  All of them were gunfighters of a different sort in a different era and a different arena.