It was dark by the time the gambler rode into El Paso, coming south out of New Mexico, skirting the southern badlands, and following the east bank of the Rio Grande.  By the time he stabled his horse, got a room at the Grand Central Hotel, and walked the three blocks to the Acme Saloon, he arrived later than he had intended to—now, it would be hard to find an open seat at a game.

Sure enough, he ended up having to wait for a seat to open in the only game.  To pass the time, he nursed a short beer, and played “Ship, Captain, Crew” (a dice game) with a stranger.  From where they stood at the end of the bar, he could keep an eye on the card game.

Poker dice was one of those games that the gambler was almost ashamed to be seen playing.  (His pappy had always said he would shoot the first of his sons he caught shooting dice!)  The problem was that, while poker was a game of skill, dice was a game of 'chance.'  Good gamblers don't believe in gambling.

As he took a sip of his beer, he idly asked the stranger what he did for a living—the man looked too well-dressed to be a rancher or a farmer, but he didn't have the manner of  a clerk or a merchant, either.  The question was just a way to be polite—most of his attention was focused on the poker game at the corner table.  He was hoping to learn how the men played before he had a chance to join the game and had to pay for the same knowledge.

"I'm a lawyer," said the stranger.  "I practice law here in El Paso, but occasionally, I have business across the border in New Mexico.  Your roll.  I’ve got nine in cargo for a total of 24."

As the gambler reached for the dice, the room seemed to explode in sound and motion.  Everything seemed to happen almost at once, as the lawyer suddenly jerked to his left and someone yelled, "Hardin!" From the door, a shot rang out.  Then, the lawyer gasped and fell to the floor.

It took a long second for the gambler to take in what had happened.  The smoke-filled room was still, everyone was either staring at the lawyer lying face down on the sawdust covered floor or looking at the man standing just inside the swinging doors, his right arm extended into the bar, still holding his smoking Colt Single Action.

For a long count, everyone in the bar remained stock still, then it seemed to the gambler as if everyone was moving and yelling at once.

The bartender nodded his head.  "I thought you knew." 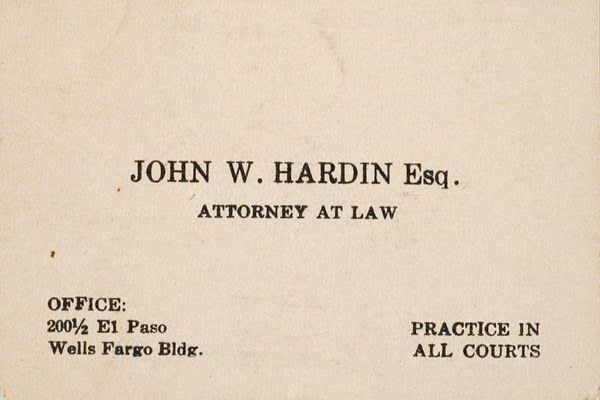 "He said he was a lawyer!  John Wesley Hardin is the most famous gunfighter in the west.  He's killed more men that Billy the Kid!"

Once again, the bartender nodded his head.  "Yes, but he ain't wanted for anything in Texas.  In Texas, he's a lawyer.  When he's short of money, then he crosses the border into New Mexico territory and hires his gun out.

By this time, the men of the bar were beginning to argue about whether Selman had shot Hardin in self-defense, or if it was murder.

It turned out that John Selman was an El Paso constable, and had a long standing feud with Hardin over a woman.  Earlier in the day, Hardin had announced that the next time he saw the constable, he was going to kill him.  Wisely, Selman had believed Hardin.  If the famous gunslinger said he was going to kill you, in all likelihood, you could start making plans for your dirt nap.

Selman had decided to act first, and went looking for Hardin.  Walking down the main street, he had checked into every bar, gambling den, and the other assorted playhouses that made up the red light district of the border town.  Finally, at the Acme Saloon, he had found his man.

The problem now, was that there were two opposing camps about how the shootout had occurred.  As more and more men began to push into the bar—hoping to catch a glimpse of the famous outlaw's body—it seemed plain that half of the men were friends of Hardin, and demanded that Selman be hanged for murder.  Several of these men claimed that they had seen the constable shoot Hardin in the back as he yelled the outlaw's name.  According to them, Hardin had been shot before he had a chance to turn and face his assassin—a clear case of murder.

"Not so!" said the friends of the constable.  Selman had stood in the doorway, and yelled the outlaw's name.  Then, as Hardin had turned, he had begun to draw his gun, and Selman had beat him to the draw, shooting Hardin in the chest—making this not only self-defense, but a clear case of public service.

The argument was beginning to get heated.  The men examined the body of Hardin, but found the bullet had passed all the way through the man's torso, leaving no clue as to which side it might have entered or exited.  The slain gunfighter's Smith & Wesson Model 1881 was found on the floor near the man, but had it fallen out of the holster when the outlaw fell or had he drawn the weapon and dropped it when he was shot?

The debate continued, well lubricated by a brisk business at the bar.  Finally, the bartender offered a suggestion:

"Hey!  This man's a stranger here, he didn't know either of these men," he said pointing at the gambler.  "And he was standing right beside Hardin.  He has to know what happened.  He was looking right at the man when the fight started."

The bar's patron's crowded around the gambler.  One large man, reached out and grabbed the gambler's arm.  "That's right, you were shooting dice with Hardin when he died.  What's your name, mister?"

"Bret Maverick," said the gambler.  "But, I'm just passing through El Paso.  I don't want to get involved in your argument."  Maverick tried to pull loose from the man, but the crowd seemed to push in even tightly around them.

"Don't give us any of that guff," said the man still holding the gambler's arm.  "We want to know what happened and you're going to tell us.  We have a right to know!"

When the large angry crowd murmured their agreement, Maverick realized he had a problem: No matter what he told this mob, about half of the men present were going to be angry with him.  (And as liquored up and hostile as they were, they were likely to take their anger out on him.) 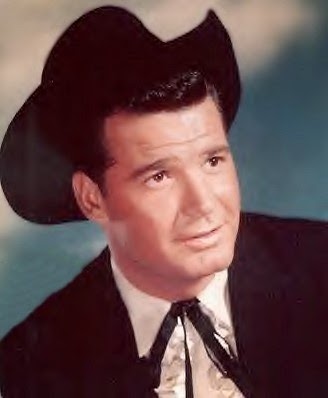 Maverick smiled, reached into his pocket, and dropped two-bits on bar as ample payment for his short beer.

"You're right, boys, I did see the whole fight.  And I'll be happy to tell you exactly what happened."  As Maverick said this, he gently pulled his arm loose from the grip of the larger man, carefully stepped over the lifeless form of the famous gunman, and moved slowly down the bar, away from the far corner.

"I have to tell you, I had no idea that I was with John Wesley Hardin, but I have certainly heard of his reputation.  And while I had never met the constable here, before tonight, I think we all know what kind of man he is, too."

"Would you stop stalling," urged one of the men in the crowd.  "Was he shot in the chest or the back?"

"That's exactly what I'm about to tell you," said Maverick.  By now, he had made his way across the bar and was standing on the door sill, with his back to the swinging doors of the bar.

The whole bar stood still and waited for the verdict.

And with that, the gambler slipped out the door into the night and hurried away from the bar.

NOTE.  You will have to forgive me for playing fast and loose with the facts here.  John Wesley Hardin did meet his end in the Acme Saloon at the hands of Constable Selman.  Hardin was indeed shot while playing dice at the bar, and there is still debate about the fairness of the shooting.

At his trial, Selman claimed that Hardin had spotted Selman's reflection in the mirror over the bar and started to draw immediately, but from where the mirror was located, this seems unlikely.  In addition, Selman shot Hardin a total of four times—an unnecessary detail for our story, since all the number of shots proves was Selman's sincerity.

While Selman wasn't hung, the jury was—but only in the sense that they never reached a verdict.  On this technicality, John Selman was a free man.  In the end, perhaps Maverick's conclusion was correct.

I have no idea whether Bret Maverick was actually there or not.  He might have been, the newspaper accounts are a little fuzzy.  But since the famous gambler's birthday was this week, on April 7, I thought I would take the liberty of celebrating by writing a small tribute to him.  If you are going to buy him a cake, you will need 168 candles.  (His birthdate was revealed in Greenbacks Unlimited, which aired 3/13/1960.)