A Wing and a Prayer

Forty years ago this week, Major Buang Ly had an impossible problem.  He was an officer in the South Vietnamese Air Force, but his country was dying and it was far too late to fight. This was also the last possible day to escape to safety because the forces of North Vietnam were sweeping southward throughout the entire country.

On April 29, 1975,  the country of South Vietnam was quite literally in the process of ceasing to exist.  All over the country, prominent members of the dying country were being arrested or killed by the communists taking over.  Even if the major could avoid that fate, he would be forced to live in an oppressive communist state where the best he could hope for would be a lengthy prison term in a reeducation camp.

And, of course, Major Buang had a family—a wife and five children.  His youngest child was barely 14 months and his oldest was only 6 years old—he certainly did not want to be separated from them.  Since he and his family were located on Con Son Island—located off the southeast coast of South Vietnam—there was still a very small amount of time in which to flee.

Major Buang seized the only chance he had available.  Taking his family to the nearby airfield, he loaded them into an impossibly small airplane, a tiny O-1 spotter plane.  Nicknamed the Bird Dog (the plane is supposed to fly low and slow while the pilot 'sniffs out' the enemy), this is the military version of the Cessna 170 civilian airplane popularly used for training pilots.

The Bird Dog is slow (flying at only 90 knots), unarmed, and impossibly small (it only has two seats).  Even if he could take off with a full tank of gas, the plane's maximum range is just barely over 500 miles—much too short for the major to reach a friendly country.  And with seven people on board, the plane would be overweight, meaning the major could not take off with a full tank.

Even if he did manage to get the plane off the ground, and if he could manage to avoid the inevitable enemy ground fire, where could he go?

Major Buang Lee loaded his family into the plane.  What few possessions the family took with them fit into a single pillow case.  As the plane took off and slowly climbed to an altitude just barely above the treetops, the major had to weave and bank to avoid enemy small arms fire.

As a matter of fact, the major had never even seen an aircraft carrier and it was highly unlikely that he'd be able to see one that day.  The weather was not good, with the ceiling down to 500 feet.  This meant that if the little plane climbed above that altitude, he would be in the clouds and wouldn't even be able to see the water directly below him.   But from only 500 feet up,  the misty clouds limited visibility to only five miles, making it almost impossible to find any ship.

Even if all those hopes were realized, the Cessna Bird Dog was not designed to land on an aircraft carrier.  No one had ever even attempted such a ridiculous thing.  Since the plane normally lands at 70 knots, even if it could touch down on the moving ship, what would stop it?

Far to the east, Captain Larry Chambers of the USS Midway was finishing up his mission.  Days earlier, he had been ordered to participate in Operation Frequent Wind, a last ditch effort to save as many Allied personnel as possible from South Vietnam before the country was overrun by the communists.  Half of the carrier's planes had departed for Subic Bay in the Philippines to make room for 10 large Sea Stallion helicopters.  All morning, the large helicopters had made trip after trip to the country.  Other helicopters, including several UH-1 Hueys had followed the larger choppers back to the ship.  In 19 hours, 81 helicopters had rescued nearly 6000 refugees.  As a result, the flight deck of the large ship was crowded with helicopters.

Somehow—against all odds—Major Buang did find an aircraft carrier he was seeking: the same USS Midway.

When the diminutive Bird Dog slowly approached the carrier with its landing light on, a helicopter was dispatched to ascertain the plane's intentions.  The pilot of the helicopter radioed back to the carrier that the plane held "at least four passengers."

Clearly, the plane was not attacking.

Slowly, Major Buang circled the carrier.  Flying directly over the center of the ship, he tossed a handwritten note out the window, only to see it land in the sea.  As did the second note.  Finally, on his third attempt, the note landed of the flight deck and was taken to Captain Chambers.

"Can you move the helicopter to the other side, I can land on your runway, I can fly for one hour more, we have enough time to move. Please rescue me! Major Buang, wife and 5 child."

Both Major Buang and Captain Chambers also understand what the note did not say: with only one hour of fuel remaining, the small plane was too far from land to make a return.  The Bird Dog had to land somewhere.

Carrier landings are hard.  And a failed attempt would be hazardous to the crew of the ship.  Captain Chambers was in communication with the fleet admiral, who told the captain to not even attempt to land the Cessna. 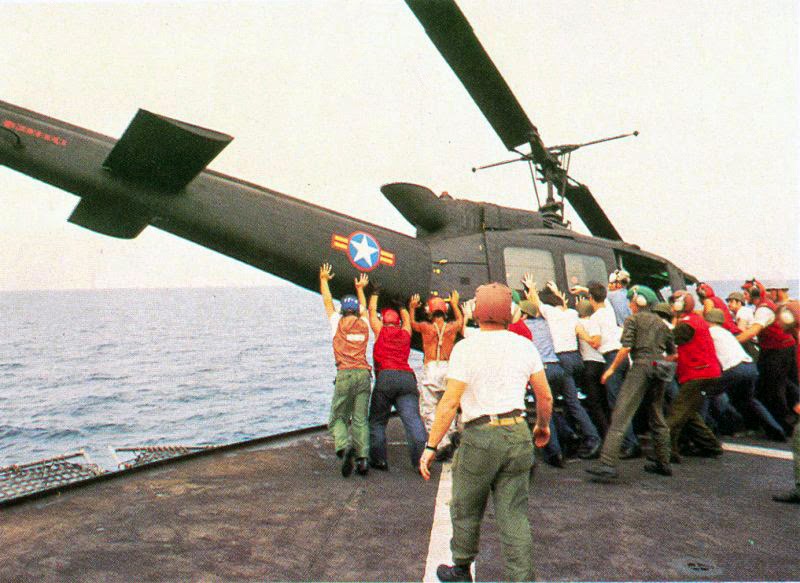 
Finally, the captain ordered the Midway to turn into the wind and for engineering to increase speed to 25 knots.  Almost immediately, engineering reminded the captain that since the ship was engaged in helicopter recovery, half of the massive steam turbines were shut down.  With the remaining power plants, the ship could not generate enough power to reach 25 knots.

Captain Chambers ordered all power from the operating plants to be used for propulsion.  All other electrical needs for the ship were to be powered by the emergency diesel generators.  The Midway slowly moved into the 15 knot wind and slowly increased its speed until it was making 25 knots.

Captain Chambers knew that if the pilot could slow down the Bird Dog's air speed almost to the plane's stall speed, the plane's relative speed to the ship would only be 15-20 knots.  While this was good, there were still problems.  First, a carrier deck is narrow, so the pilot would have to be perfectly lined up.  Second, the pilot would have to apply the landing gear brakes on the plane as soon as the plane touched the deck.  The most important problem, however, was that the stern of a moving carrier creates powerful downdrafts.  The captain knew this, but there was no way to communicate this problem to the Bird Dog's pilot. 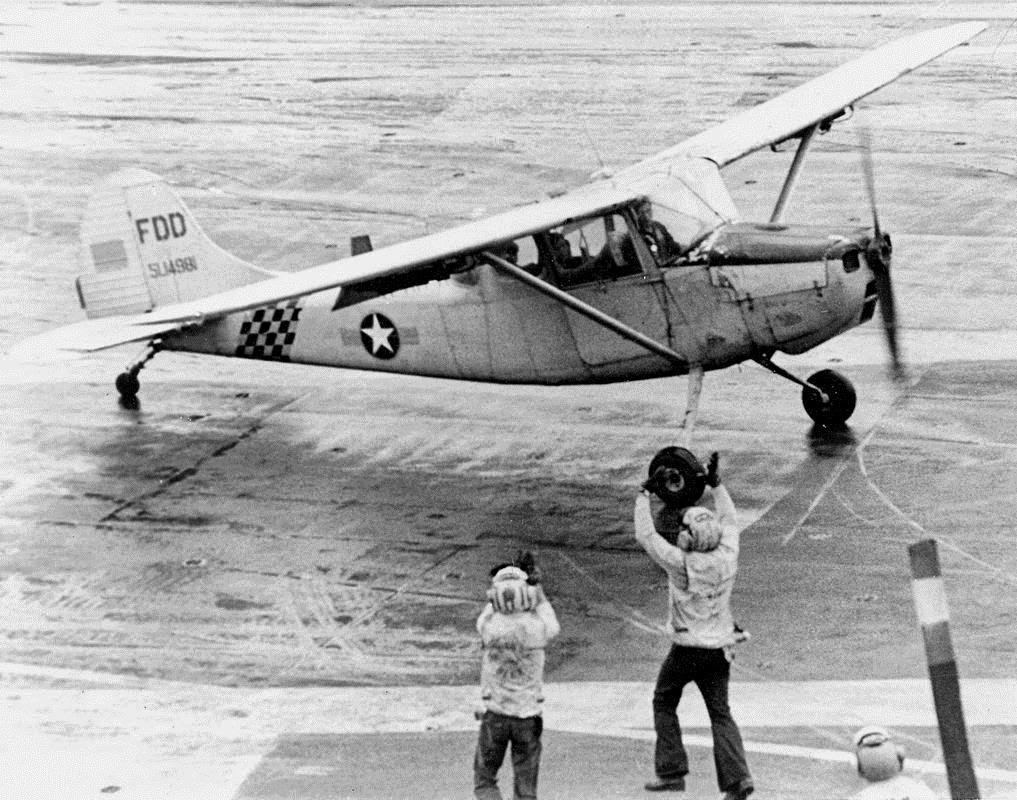 When Major Buang made his approach, everything was perfect.  Captain Chambers later stated that if the Cessna had been equipped with an arresting hook, it would have been a perfect third wire landing.  In the picture to the right, the deck crew can clearly be seen waving its hands in the air in congratulations.

Amazingly, Major Buang stopped the plane after a landing roll of roughly 200 feet.

The crew of the Midway quickly adopted the family and raised funds to help them get established in America.   Recently, Major Buang Ly and his family, now much larger, were reunited with  Admiral Larry Chambers (RET) at the National Naval Aviation Museum in Pensacola, Florida.  If you go there, you can see the only Cessna O-1 Bird Dog to ever land on an aircraft carrier.
Posted by Mark Milliorn at 12:29 AM