It is Christmas in southern New Mexico. You can tell by the weather, it is unseasonably cold; it only got up to 60 degrees today. Blue skies and warm sunshine, New Mexico has the perfect winter weather. If you don’t go outside in the middle of the night, our winter’s amount to only a few cold days scattered across a couple of months. We had one of those days last week; it snowed half an inch in one day, the schools closed, people panicked as if they had never heard of snow, and then we were back to normal.

For us, snow is mainly a spectator sport; we can see it on the mountains as we play golf. Snow belongs on Christmas cards and Yankees’ heads.

But you can tell it is Christmas because all the college students have left town. It is so quiet! God knows I love my students, but it is nice to drive to work without 5 cars driving so close behind me they seem to be auditioning to become my own personal proctologist. I know a librarian who once wished the students would never return; “It would be so much easier to keep the library neat if we didn’t have all those students.”

The southwest has its own form of Christmas decorations; luminarias. A tradition that dates back to when this part of the country was part of Mexico, luminarias are small paper sacks partially filled with sand that anchors the sack and provides a base for a burning candle. My family uses a modern version, a plastic waterproof sack containing a small electric light. The traditional name for these is fakolitos.

My wife, the Doc, is unhappy that Christmas seems to become more commercialized every year. Once again, I disagree. I don’t think the holidays are commercial enough.

Exactly what is supposed to be wrong with money? Somehow money has become synonymous with evil. While I have no idea where this silly idea came from, I can tell you exactly what is wrong with it. Money is nothing more or less than the present incarnation of an ancient idea. Thousands of years ago man worked and fought for meat. If you had enough, you did not starve. Today, civilization notwithstanding, modernization has simply substituted money for meat. And if you have enough, you still won’t starve. Money is meat.

So bring it on, commercialize the holidays all you want. Let’s start the Christmas season even earlier, put the tree up Halloween night. Turn Thanksgiving into a Christmas brunch, and New Years can be the morning after party. While you are at it, you can merge a few other holidays into Christmas. 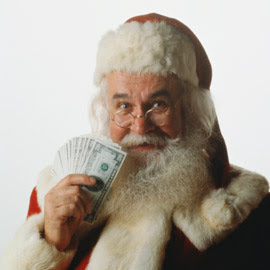 Hanukkah lasts 8 days, Kwanzaa 7, but Christmas is limited to one? Let’s combine them all and shoot for 100% participation. Happy Kwanistmaskuh!

Not only would this maximize shopping time, but it would eliminate all the false pretenses that have cropped up lately by the university and most stores about Christmas. Season’s Greetings, Happy Holidays, Winter Break, my ass. Who the hell do we think we’re fooling? By combining the various holidays, all of them lose their religious significance, and we can concentrate of the business of Christmas. The expanded economic season will mean full employment, rising industrial profits, and increased tax revenue for the government.

As a first step, I believe the government should enact a Christmas stimulus package. Uncle Sam Claus can leave cash in my stocking.
Posted by Mark Milliorn at 12:03 AM