Thoughts On Being a Grandfather, Honorary Second Class

When your children are small, it is amazing how little you know about being a parent. Every situation is new, the children are fragile, and the job is impossible. I distinctly remember trying to dress What’s-His-Name in a snow suit. I think he was three, all elbows and knees and it seemed impossible to get both his arms in that blasted suit at the same time. I suddenly realized that I was exerting on this tiny little arm approximately the same force necessary to remove a frozen lug nut from a truck tire. It was just blind luck that I didn’t end up with that arm ripped loose in my hands.

Right about the time I began to understand small children, I blinked, and suddenly the boys were teenagers. For a while, I thought this was an improvement, after all, I remembered being a teenager myself, I was a treasure trove of relevant information. Unfortunately, my sons had discovered that both their parents were morons; neither of them would listen to such unreliable people. The best they could hope for was that we wouldn’t embarrass them in public while they tried to borrow my pickup.

Then suddenly, they were adults. Now, they are not only willing to listen to us, but are plainly astounded at the sudden knowledge my wife and I possess. Obviously, we morons have been studying nights. Unfortunately, we still don’t seem to be of much use as either our lives have sufficiently diverged from theirs or our memory has degraded. Whatever the reason, it doesn’t seem we have much relevant advice.


Another possibility is that their father just wants to see the boys crash and burn. Bad mistakes make good stories. Somebody has to write this blog, otherwise there are no ads for you to click.

For whatever reason, it seems that as a parent, you are never really as much help to your children as you would like. Raising kids is a cruel joke that you play on yourself.


Then, suddenly, it is Act II and you have grandchildren. At first, this seems like a great joke on the parents bordering on sublime revenge. For Christmas, I’m thinking of giving the Munchkin a set of drums. I hear ferrets make horrible pets; I’ll buy her two. 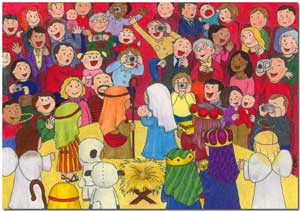 Some of the fun of being a grandfather disappears when you realize there is work involved. Undoubtedly, the worst chore is the Christmas pageant. How many millions of hours have been wasted by men sitting in a school cafeteria, their ass wedged into a tiny chair designed for someone about 4 foot tall, while they listen to a flock of pre-pubescent tricycle motors sing Christmas songs in an octave only dogs can hear?

The entire herd stands on the stage like deer caught in headlights as they sing the same words to every song:

You Better Be Christmas Bells

All around you, soccer moms are videotaping every second. Who exactly will ever watch this? This is a new age, we have internet and YouTube. When you are probably just a Google search away from watching a video of the most wildly improbable event you can possibly imagine; say a chimpanzee attempting to mate with a football, why would you suddenly decide that tonight would be a perfect night to watch a badly filmed video of tiny children singing, “I Saw Mommy Kissing Santa’s Reindeer?”

Bored out of my mind, all I could do was sit there and ask myself questions. Why do schools have the acoustics of a snare drum? How do they expect a grown man to smile all the way through a Christmas pageant with nothing more fortifying than a plate full of vanilla wafers and a Dixie cup full of mystery punch? And most importnantly, exactly how much trouble can you get into if you spike the punchbowl in a pre-school?