The sad news today is the passing of a great inventor; Walter Frederick Morrison. This is the man who took a lid from a tin can full of popcorn, tossed it to his girlfriend and thus eventually earned a million dollars. Not bad.

Morrison sold his toy to Wham-O!, who sold his idea to Mattel, and all of them managed to sell us some 200 million flying discs, probably a third of which are on a roof somewhere right now. The patent has expired on the idea and no one knows how many companies around the world are making some sort of spinning toy, but only Mattel makes the Official Frisbee. 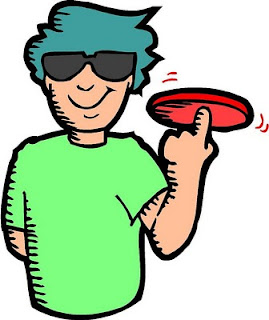 The history of the disc is truly remarkable; it has been estimated that 90% of all homes own one. If true, this would mean that the invention has saturated the market about as well as any device invented in the last 50 years. The US Navy spent $400,000 on an experiment to see if the toy could support naval flares. The Navy even designed and built a special machine to toss the discs off a mountain in Utah. I doubt if you will be surprised to learn the project was a failure. What happened to that machine? I hope the government has it preserved in the same warehouse they use to hide the Arc of the Covenant. This is the kind of technology that we should keep classified.

I can remember my first Frisbee: my father gave it to me right about the time that every American in the country was obsessed with the Hula-Hoop. The Hula-Hoop is one of those toys that will probably no longer work when most Americans no longer seem to have a waist or visible hips. When the average person looks like three grapefruit in a sock, at the very least we would need a hoop that is probably too large to bring home from the toy store. Back in 1959, my brother and I immediately invented a game that involved a hula-hoop, a Frisbee, and a barking cocker spaniel. I think the dog was the referee.

My favorite memories of playing with a Frisbee are from college at the University of Houston when I was dating my future wife. We were poor students, a concept that seems to have disappeared. I have students today who claim to be poor, but it is a little hard to accept that someone is poor when they are carrying a cell phone, a laptop, and an Ipod; the combined cost of which is more than I paid for my first two cars, my freshman tuition, and what I used to pay a month for rent on my apartment; combined.

No, my wife and I were the kind of poor where we had no phone, no TV, she had no car, and occasionally my truck stayed in the driveway for a week at a time since I could not afford to buy gas. And this at a time when gas cost about 35 cents a gallon. This kind of poor put quite a strain on dating. It is relatively hard to take a woman on a date when you have about a dollar and half. Hard, but not impossible.

Once a week, there was an inspection cruise up and down the ship channel and it was open to the public. The crew of the inspection ship thought it funny when my date and I brought a picnic lunch and ate it on the bow of the ship. Or you could, if you really studied the map and planned the transfers, ride the bus system all over the town for about half a dollar. A bus tour of the city.

There were lots of cheap dates; I gave blood for dinner theater tickets, there was an audience at the local TV station for a cooking show, there were art shows, museums, and I am afraid we crashed more than a few weddings. My favorite date was the picnic at the park with a Frisbee. Total cost: Zero. Those picnic lunches…well, I worked nights at a hotel that had several restaurants. No one has more friends than a restaurant chef.  I probably still owe that man a few favors.

With about three dollars, I could buy enough gas to get my aging Chrysler Barracuda to the beach in Galveston. After swimming in the gulf, we could play with the Frisbee until the sun went down, then watch the submarine races at night.

I remember a blanket in the park, cold chicken, and tossing a Frisbee until we were so tired we had to go back and lay on the blanket. I think I remember the blanket the best.

You don’t have to cure cancer or paint a ceiling in the Sistine Chapel to leave the world a better place than you found it, sometimes even the smallest actions can improve the world. Thank you Mr. Morrison. Well done.
Posted by Mark Milliorn at 12:01 AM