I Know Nothing of Art

I confess:  All the knowledge I possess about art could easily be chiseled onto a granite slab small enough to fit in a gnat’s navel.  And it would rattle around in there, so small as to not discomfort the gnat.

I have no ill feelings towards art, but I do want to express some small pet peeves on the subject.  Not art itself, but a few topics on the periphery of art.
Let me start with Terry Gross of WHYY in Chicago. Her show, Fresh Air, can be heard daily on NPR.   This is a radio program I I dislike so thoroughly that I rarely miss an episode.   According to most of my email, most of the readers of my blog share this trait.
For those of you who don’t know, Ms. Gross is a talented and intelligent woman who can be heard 5 times a week interviewing among other people, artists, musicians, and actors.  And here is the rub; many of these people are the most whiny, self absorbed, unhappy people on earth.  The average interview seems to be with an angry woman furious that the government has cut off her funding, making it impossible for her to continue to pursue developing her medium:  political protest paintings made with elephant shit.
Why are all the artists so miserable?  So unhappy?  They all seem to come from such miserable homes that any given time one of their parents were being tried at the Hague for war crimes.  Are all artists addicted to snorting Sherwin Williams Permalast Oil Paint and have spent the majority of their lives in St. Dumbbell’s Rehab for the Clinically Idiotic?

Would it really be so bad if just once, Ms. Gross could interview someone happy?  Can you not find a single truck driver in Chicago who has been happily married for 25 years to the same woman, has three normal kids, and looks forward to his Wednesday night bowling league?  In short, a simple normal guy who thinks life is just grand?
Secondly, I guess I don’t like Art Education.  I’m not talking about art education at my university; I have no idea what they do across the campus.  They are probably doing a great job.  Or not.  I would have no way of knowing.  I guess what I am peeved at is the industry of art education.  Anyone can be an Artist!  Send $39.95 and we guarantee to tell you so!
Even in a small sleepy New Mexico town, there are a plethora of stores selling art supplies, art galleries, and an entire army of people willing to take your money in exchange for lessons.
This reminds me of an afternoon many years ago when several of us were sitting around testing a case of beer to see if any of the bottles had spoiled.   Someone used a book of matches to relight his cigar, and there on the inside cover was that classic of advertising, the free art talent test.  Could you draw the pirate?  A small contest ensued; who could draw the worst picture.  The eventual winner was a result of several unorthodox techniques up to that date unknown in most art circles.  This included a contribution from the south end of a slumbering dog.  The masterpiece was mailed in, and in due course we were shocked to learn that dog’s ass had valuable latent talent.
Years ago, there was an annual art show in Texas called the Starving Artist Show.  Every painting had to sell for under $25.  The WalMart of art, enabling every single Texan to own his own original oil painting of a field full of bluebonnets dominated by a windmill.   There is a law requiring every home in Texas to own one of these. 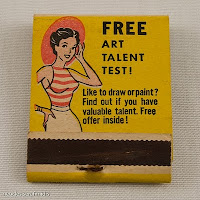 My mother and I had a small argument over the quality of the art sold in these shows.  My mother believed that true bargains could be obtained in these shows.  My opinion was that the mob that showed up would purchase road kill if you told them it was sculpture.  It turned out I was right because at the next show I spotted a table where a man was selling purses fashioned from armadillos.
Since anyone could enter a painting, I decided to enter one of my own.  Despite the fact that I have absolutely no artistic ability, I had a plan.  I took a piece of plywood about two by three feet, sanded it smooth and painted it white.  This was my canvas.  Didn’t Leonardo da Vinci paint the Mona Lisa on wood?
My paints?  I had a cigar box full of assorted ballpoint pens of various colors.  I took these apart and cut the tips off the little tubes of ink.   I held each up to my mouth and blew the ink out onto the board.  I won’t say the result was pretty, but it was interesting.  A mass of wavy inky lines that looked like… exactly like something that looks like a mass of wavy inky lines.  After rotating my masterpiece for a solid ten minutes, I finally decided which way was up, signed the bottom with a ballpoint pen, naturally, and took it to the show.
It sold.  Somewhere, someone presumably has an original Milliorn.  But I’m not sure it will be the only one.  I’ve applied for a grant to paint more.  Terry, if they turn me down, I will be both terribly angry and available for your show.
Posted by Mark Milliorn at 12:01 AM