The Pope has been in the news constantly this week. First, there was the surprising announcement that to avoid AIDS, it might be permissible to use a condom as long as one of the partners was a prostitute. I guess this is progress, but the requirement seems a little drastic for the average couple to use as birth control.

Then there was the story about the present pope, a former Hitler Youth, beginning the slow process of granting sainthood to Pope Pius XII, who collaborated with the Nazis during World War II. It is always so touching when Nazis stick together.

With news like this, everyone has all but forgotten about yet another lawsuit against the Catholic Church and alleged pedophiliac behavior by European priests. And there have been calls against the current pope, claims that by covering up the activity of these priests, he is by inaction allowing this activity.

As a historian, I find this a little strange. The history of the church for the last 2000 years shows a relatively simple solution; let the priests marry. Consider a few facts:

Peter, the first Pope, was married, as were most of the Apostles appointed by Jesus. At least two of the Popes were the sons of Popes. For the first couple of centuries, it was widely known that most priests were married, but then, increasingly, there was a general view that priests should avoid women, even their own wives, for their corrupting influence. In the fifth century, St. Augustine wrote, “Nothing is so powerful in drawing the spirit of a man downwards as the caresses of a woman.” Still, for the next several centuries, the majority of priests were married. In the 9th century, St. Ulrich, a holy bishop, argued from scripture and common sense that the only way to purify the church from the worst excesses of celibacy was to permit priests to marry. 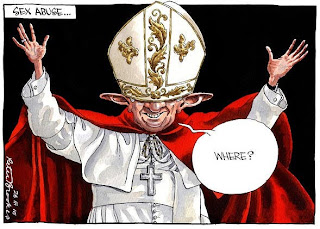 Even today, all around the world, the Catholic Church routinely ignores married priests as long as they do not take their marriage public. This may be the source of ‘Don’t Ask, Don’t Tell.’ And it’s not working any better for the church than it has for the military.

I think it is time for the church to face a relatively obvious truth; the only sexual perversion is abstinence.  And, unfortunately, the denial of this simple fact opens the pope up to all forms of accusations. Not surprisingly, many are saying that if the Pope protects pedophiles, he is by extension a pedophile himself.

Why in the world would someone think that the pope might be a pedophile? Why would anyone suspect a billionaire former Hitler Youth of suspicious activity? Who would suggest that a creepy old celibate wearing a bad white dress is a pedophile just because he drives around in a glass walled vehicle (nothing says faith in God more than seven inches of bullet proof glass) that looks like an ice cream truck?

Okay, okay. I’ll lighten up on the Pope.

The seven dwarfs are in Rome and they go on a tour of the city. After a while they go to the Vatican and Grumpy gets to meet the Pope privately. Grumpy, for once, seems to have a lot to say. He keeps asking the pontiff questions about the church, and in particular, nuns.

"Your Holiness, do you have any really short nuns?"

"Are you sure? I mean, you wouldn't have any nuns that are, say, about my height? Maybe a little shorter?"

"No reason," said Grumpy, clearly upset. "Are you positive? Nobody in a habit that's about 3 feet tall, 2 feet tall?"

"Okay." Grumpy looks dejected at this news, and the Pope wonders why. So he listened to the dwarves as they leave the building. "What'd he say? What'd he say?" ask the other six dwarves.

Staring down at the floor, Grumpy answered, "He said they don't have any."

Okay, it’s a bad joke, but Grumpy is still more normal than the Pope.
Posted by Mark Milliorn at 12:01 AM