My father was in the Civilian Conservation Corps.  The CCC, as it was called, was a program started by President Franklin D. Roosevelt during the Great Depression to keep unskilled teenagers who might be hired for cheap wages out of the work force, thus freeing a job that might employ a head of household.  And you can’t have a lot of teenagers hanging around doing nothing.  If the prospect doesn’t sound frightening, imagine thousands of teenage boys across the country simultaneously saying “Hold my beer and watch this.”

These young, unmarried men were employed to build roads, plant trees and build parks, in short, about all a teenager from West Texas could reasonably be expected to accomplish.  My father never really talked about the work much, but I pieced enough facts together to figure out that he helped build a highway somewhere west of Fort Worth.  As far as I am concerned, all highways west of Fort Worth are secretly named the James H. Milliorn Memorial Highway.  The sole exception is Interstate 10 between Las Cruces and El Paso, this road is Who-The-Hell-Came-Up-With-The-Idiotic-Idea-Of-A-Safety-Corridor-Highway.


The CCC started in 1933 and ended in 1942, when most of the young men, (who had nominally been commanded by Army Reserve Officers), were more or less marched into recruiting offices to fight World War II.  And while I do not know the exact details about the transition for my father, this is more or less what happened to him.  What I do know a little about, is how he came to leave home for the CCC.
As a young teenager during the Great Depression, the prospects on a West Texas farm must have been grim.  I have always wondered just what my ancestors were thinking about when they picked that particular homestead.  As they were traveling west by covered wagon, what possessed them to look around that hardscrabble country and suddenly say, “Hey Ma!  This looks good; let’s stop here!”  I have no idea where they came from, but when they left, it must have been underwater and on fire at the same time.
One of the many chores my father had on the farm was to take grain out to the calves.  While the older cattle could take care of themselves, the few calves couldn’t find enough grass to graze on, so their diet had to be supplemented by grain.   My father would fill an old cast iron soap kettle with grain and carry it out to a dry creek bed where the calves were waiting patiently.  Then, he would watch them eat, make sure none of the other cattle intruded, and then carry the soap kettle back to the dog-run house in the center of the farm. 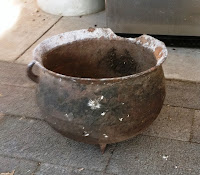 Watching cattle eat doesn’t use a large part of your brain.  Actually, farming in the kind of country where you can’t grow a reliable crop of cactus without a complicated irrigation program doesn’t usually inspire deep thinking about much of anything but escape.  In any case, at some point, my father looked at those calves and simply walked away.  He didn’t go back to the house; he just left and joined the CCC.  By the time the war was over, he was married and ready to start a family.
Let’s move the story forward a couple of decades.  It’s the early 1960’s and my father is heading back to the old homestead for the first time in about 20 years, to attend a funeral.  In the intervening years, he has managed to convince himself that he is allergic to every known animal, bird, fish or reptile.  He would have convinced himself that he was allergic to dirt if that was the only way he could insure that he never, never had to live on that farm again.
Naturally, after the funeral the family spent a lot of time sitting around that wreck of an old house talking about old times that never were.  Do you remember this and do you remember that?  And since the family farm was about to be sold, people were scrounging around the pitiful house trying to find a few keepsakes.   It wasn’t long before my aunts and uncles turned on my dad.  “Why did you steal the old soap kettle?  That was the only thing the family still had from when the family moved west.”
My father was kind of stunned.  “You mean you never brought the kettle back to the house?” He was talking about an event that happened before Pearl Harbor, he couldn’t believe them.
“No,” my uncle answered.  “You took it with you when you left home.”
My father stared at his brother for a long minute, then just walked out into the dusty field, stepping over a sagging barbed wire fence, and disappeared into the brush.  He was gone for about ten minutes, and then could be seen walking back with that old cast iron soap kettle on his shoulder.  He walked straight to his car, unlocked the trunk, put it inside, and then shut the trunk lid firmly.
And just as firmly, he refused to discuss the matter with his family.  The general feeling was that if the family was too lazy to find that pot through two wars, and the start of a third one, they had pretty much lost the claim to it.
This is the part of the story where I probably should put a moral of some kind--something about patience or time--something inspiring about the Great Depression or young men going off to World War II.  Sorry--all I can think about is a smaller question: I wonder how many days those calves waited at that creek bed for my father to come back.
Posted by Mark Milliorn at 12:01 AM