This is All True, I Swear

I have a pet peeve this week: profanity (actually the lack of it).  I was bowling this week with … well, call her Ruth (that was her name)… when an absolutely beautiful ball solidly into the pocket produced a 7-10 split.  The poor girl should have been kissed because she had just been screwed.  Despite this, she refused to utter a single necessary expletive.  She kept saying it was inappropriate.  This, or course, is the whole point: if it is appropriate, it’s not profanity.


I cannot imagine living without profanity; how would I ever be able to lecture about the French?  As Mark Twain said, “… under certain circumstances, profanity provides a relief denied even to prayer.”  Personally, I think it can prevent a 7-10 split if applied skillfully.
Skill in profanity is sadly lacking today--not from overuse, but from timidity.  All too frequently, otherwise intelligent adults are reduced to the linguistic capabilities of children by using such euphemisms as “the f-word.”  What exactly is the purpose of this?  Everyone knows the word you mean, knows you want to use it, and knows you lack the balls to say it.    This is the verbal equivalent of trying to pick up a turd by the clean end.  Unless “u r hukked on fonix,” you are too old to be using “f-word.”
Remember, this was at a bowling alley--not the faculty dining room at Harvard.   I have overheard people discussing the best way to finance a tattoo!  (At the bowling alley, I mean-the people at Harvard probably get their tattoos from the Art Department.) 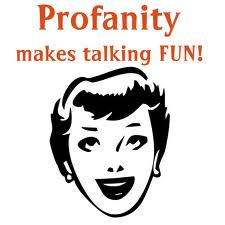 When the boys were small, the various neighborhood rug-rats taught them some highly inappropriate language for the various bodily functions.  Soon, the boys were saying such phrases as “tinkle,” “number one,” or “whiz.”  My wife and I took immediate and decisive action; every offence was punished by the requirement of doing ten pushups.  We didn’t care if the boys had to go take a crap, but we wouldn’t stand anyone going wee-wee.  Later, this was a frequent topic at parent-teacher nights at school.
Some profanity is just used completely backasswards.  Why on earth do we say if something is bad that it sucks?  Sucking is a good thing--damn near a perfect and holy rite.  Not sucking is horrible.  When we say something sucks, this should be the highest praise--the pinnacle of perfection.
Where did this confusion come from?  I believe that this, like most of the real evil in the world, originates with Baptist preachers.  In an attempt to banish their own unfulfilled desires (not to mention disguise a few repressed feelings of their own) they have reversed the meanings of the word and forever confused the word ‘suck’ with homosexuality.  And of course, they have used the Bible (especially some bad Greek translations of terms) to justify their actions.
Yes, I know that Leviticus condemns homosexuals to death, but let’s be honest: Leviticus would condemn parking violators to death.  If you read long enough, you can find something in Leviticus that would justify the destruction of a day care center with napalm.  Levi and the rest of the Levites were probably the victims of over-aggressive toilet training.
No, let’s move forward a few centuries and look for confirmation in the book of Matthew.  To be precise, let’s quote Matthew 15, verse 11.  In the King James Bible, this says:
Not that which goeth into the mouth defileth a man; but that which cometh out of the mouth, this defileth a man.
Obviously, a just and loving God not only endorses sucking, he commands us to swallow.
Posted by Mark Milliorn at 12:01 AM