Let’s Encourage the Others

Suddenly, with the foundering of the Costa Concordia off the Italian coast, people all over the world are thinking about a similar event 100 years ago this April.  For days, the news agencies interviewed survivors who consistently said, “Did you see the movie Titanic?”

Ignoring the strange fact that people tend to categorize real world events through the distorted prism of Hollywood, it is rather heartening to see so many people striving to find a historical reference to help explain the seemingly impossible loss of an “unsinkable” ship.  While I have no intention of repeating an endless stream of Titanic references—ending with the inevitable reminder that the Italian ship foundered on Friday the thirteenth—I do want to point out a few less obvious historical references.

As I write this, it is exactly one year after the US Airlines 1549 flight that ended with Captain “Sully” Sullenberger successfully landing his Airbus in the Hudson River.  After a miraculous landing, Sully walked up and down the aisle of his aircraft, even as it slowly sank, making absolutely sure that every passenger and crew member had safely evacuated the plane.  There were no casualties.

Almost forgotten today is Pan Am Flight 6.  On October 16, 1956, the Boeing 377 Stratocruiser was attempting to fly from Hawaii to San Francisco when it lost two of its four engines.  Captain Ogg managed to fly the crippled aircraft, and its 24 passengers and 7 crew members, to the Coast Guard Cutter Pontchartrain, and circle the ship until daylight. The ditching was successful, and Captain Ogg was the last man off his doomed plane.  There were no casualties, excepting the 40 crates of parakeets in the luggage compartment.

When the SS Andrea Doria collided with the MS Stockholm in July 1956, the captain knew immediately that the ship would sink.  Despite the fact that the ship immediately listed so badly that half of the life boats could not be used, the efficiency of the crew, led by Captain Calamai, ensured that the only casualties were a result of the collision, not from the evacuation.  Only after every passenger and crew member was off the ship did Captain Calamai leave his ship.

While the exact cause of the Costa Concordia accident is not (at this time) known, it appears that Captain Schettino deliberately steered his vessel too close to the shore in order to provide his passengers a better view of the coast.   When the ship hit the rocky reef, opening an enormous hole in the ship’s hull, the captain tried to ground his ship on the nearby shore.  Obviously, by this point, the captain fully knew his ship was doomed.


No warning was given to the passengers for an hour, even as the ship began to list.  No orders were given by the Captain to lower the lifeboats.  The passengers, most of whom had not yet been drilled in safety precautions, were left to fend for themselves.  While it is not yet known exactly when the Captain abandoned his passengers, his crew, his ship, and his responsibility, it is an undeniable fact that he was arrested on shore long before the ship was completely evacuated.  Captain Schettino was on shore long before his purser (who broke a leg when the ship rolled onto its side) was rescued by helicopter. 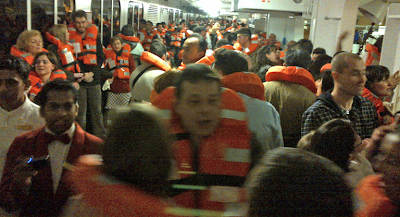 There is one more historical event to consider.  In March 1757, Admiral Sir John Byng was executed for his failure to aggressively engage the French at the Battle of Minorca.  He was court-martialed, found guilty of “failing to do his utmost”, and executed by firing squad on the quarterdeck of the HMS Monarch in the full view of the assembled fleet.

Byng's failure is referred to in Voltaire’s novel Candide with the line Dans ce pays-ci, il est bon de tuer de temps en temps un amiral pour encourager les autres – "In this country, it is wise to kill an admiral from time to time to encourage the others.”
Posted by Mark Milliorn at 12:01 AM