The BEST All Around Defense Gun

Recently, I attended a small gun show in Southern New Mexico.  You would not believe the number of people who actually seemed to be preparing for the Zombie Apocalypse.  Or maybe they were making a movie about the First World War--it was a little hard to tell from what they were selling.

This was a fairly small show, but I can remember much bigger shows.  When I lived in Galveston, a friend of mine, Colonel Klink, was the range officer for the local police department.  I’ll leave it to your imagination how he got the nickname, but twice a year Klink and I would drive to Houston and attend a gun show at the Astrodome Complex.  That show was enormous, and it was almost impossible to see all the tables in a single day.  You could find anything you wanted at that show—from an elephant gun in .600 Nitro Express to a vintage BB gun.

Klink and I loved that show, we looked forward to it, discussed what we wanted to find, what we hoped to see and which antique firearms we might get a chance to actually hold in our hands.  While we rarely bought anything, we really loved that show.  There was only one small problem:  Steve.

Have you ever had one of those friends that you didn’t dislike, but you never quite liked?  The husband of my wife’s college roommate, Steve, was an obnoxious pharmacist with decidedly more money than brains, and while we certainly didn’t want Steve to go to the show with us, somehow he always managed to bum a ride.  And for Steve, the best part of the trip was that he could actually afford to purchase what Klink and I could only look at.

The ride from Galveston to the Astrodome took over an hour, and Steve would sit in the back seat of the car listening to Klink and me talk about what we hoped to see at the gun show.  Now, Steve didn’t know enough about guns to figure out which end of a rifle to put up to his shoulder, but he knew enough to sit in the back of the car and learn what it was that we liked.  And as soon as we got to the show, he would disappear among the tables and we wouldn’t see him again until the prearranged time for us to meet at the car for the ride back to Galveston.  And invariably, Steve would have purchased whatever it was that Klink and I had discussed on the ride to the show.

That was always a long ride back to Galveston.  There is not much in life worse than a greedy, nasty little child with a new toy that he damn sure will not share.   Steve would gloat all the way home.  Worse, whatever it was that he had purchased that day was never quite the same for Klink and me.  The very fact that Steve owned the gun tarnished it just as assuredly as if Steve had stored it in a bucket of salt water.  Something had to be done.

Many beers later, Klink and I finally decided that we would try to get Steve to buy the most useless, ridiculous, and absurd gun ever made this side of France.  So Klink and I had to do some research, and there was only one possible scholarly journal to turn to:  Shotgun News.  In those days, Shotgun News was a weekly magazine--each issue about the size and thickness of the Sunday New York Times.  It wasn’t actually a “news” newspaper—it was more like an “advertising” newspaper.  Every gun made and sold in the world was advertised in that paper.  Klink and I spent an afternoon searching for the perfect--actually the least perfect—gun.  Eventually, we selected a winner.  Or is that a loser?

Strangely, this gun is STILL being made.  It is a derringer--one of those very small handguns with two barrels--one superimposed over the other--that supposedly can be used for self-defense.  Well, not really.  There are a couple of small problems with derringers.  First, the gun has practically no grip, so at most you can wrap about two fingers around the gun.  This means that it is fairly hard to hold unless the cartridge you are shooting is too small to be of much use.  Secondly, the sight radius (the distance between the front and rear sight) is so short that you cannot hit anything with the gun.  So the derringer is a gun whose time never was.  At best, the gun is of marginal use unless you use a very small cartridge and get your attacker to obligingly hold the end of the barrel in his mouth. 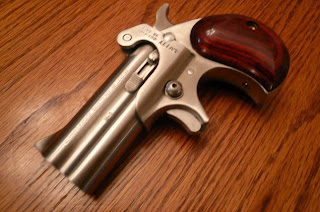 Which is why it is so strange that the company offers a model chambered for .45-70 (a rifle cartridge).  This is a huge cartridge, so long that the tip of the bullet is flush with the end of the barrel.  This is the firearm equivalent with putting a short block V8 engine on a wheelbarrow.

Well, the day of the next gun show finally came, and once again Steve begged a ride from us.  On this trip, Klink and I focused on how much we craved a .45-70 derringer.  “What a perfect self-defense gun!” we said.  “It will tear apart a rhino, if needed.”  And so forth and so on for over an hour.

As soon as we arrived at the show, Steve was off like a shot (if you will pardon the pun).  Klink and I spent the rest of the day looking at new scopes and shotguns, somewhat blissful in the knowledge that somewhere in the Astrodome, a moron was attempting to purchase a midget elephant gun.

And when we gathered back at the car that afternoon, sure enough, Steve had his prize.  The damn thing was the smallest gun firing the largest cartridge that either Klink or I had ever seen.  All the way home to Galveston, Steve bragged about that gun, and I will admit that Klink and I encouraged him, because, this was only step one of our plan.  We didn’t take Steve home; we drove directly to the island’s gun range--we wanted to see Steve shoot the monster.

The police gun range had a 25’ pistol range that was just perfect.  The firing position was covered with a corrugated metal roof to provide both a little shade and some protection from the rain.  Steve, however, was smart enough to realize that 25 feet was a little extreme for his gun, so he moved halfway to the target.  Although Klink and I were a good 30-40 feet away, I can still picture him standing there, left hand on his hip, his right arm extended as he carefully lined up the two inch sight radius on his portable howitzer.  And I can absolutely remember him firing it.

The boom was the noise that impossible gun made.  The painful oww noise was from Steve; his right arm seemed to be pointing somewhat crookedly up and slightly behind him.  The clanging noise was the derringer coming down on the metal roof a dozen feet behind Steve.  Strangely, Steve seemed to have missed the target.

Using a broom, and standing on Klink’s shoulders, we managed to retrieve the derringer.  I don’t think I ever saw Steve again after that day and I doubt that Klink did either.  I know I can remember the last thing that Steve ever said to either of us.

“You guys want to shoot it?”