The Four Stages of Santa

It would be very strange if I weren't thinking about Santa, today.   As I write this, it is Thanksgiving morning and Santa is all over the television.  Between the Macy's parade and the advertisements, Santa is receiving the kind of media exposure that just two weeks ago cost a couple of politicians a billion dollars, each. 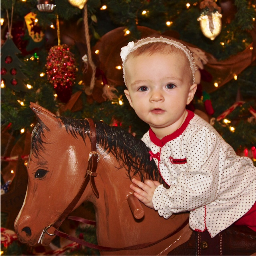 Yes, I am thinking about Santa.  The Christmas tree is already up and the grand-kids are here, and one more is on the way and--with a little brandy in the coffee--it is easy to turn philosophical about Santa.  Specifically, I have decided that there are four stages of Santa Claus.

The First Stage:  You Believe In Santa.
This, of course, is the best stage.  Pity the small child who does not believe in Santa Claus, the Easter Bunny, John Wayne, or that, somewhere, Paul Bunyan is still playing with Babe, The Blue Ox.  The world for children is supposed  to be a magical place where Peter Pan will be back from Neverland momentarily.

For Children, Christmas makes so much more sense if they believe in magic, and so much less if they don't.  If there is no magic, then why do adults suddenly act so irrationally:  they bring a tree into the house, they encourage everyone to eat the kind of food that the rest of the year they forbid, and everywhere you go there is happy music for children.

My eldest granddaughter,The Munchkin, is six, and absolutely believes in Santa.  In fact, she just wrote a letter to Santa and asked him to send Mommy and Daddy a hug and a kiss for Christmas.  This is so cute it hurts.  I may have to give the girl a pony!

The Second Stage:  You Don't Believe in Santa.
This is the worst stage.  It is so sad when children stop believing in Santa Claus.  Hell, I wish I still believed.  Maybe there is no such thing as magic, but there should be.

Whenever a child begins to express the smallest amount of doubt, they should immediately be cautioned that children who do not believe in Santa only receive clothes for presents.

What kind of punishment should be reserved for people who tell children there is no Santa?  I can still remember when another kid told me that Santa was actually my father.  Luckily, I misunderstood and for at least a year believed that my father actually was the real Santa.  I even figured out when he was making all the presents for children--it was every morning when he was locked in the bathroom for what seemed like an eternity.  He was obviously using the electric razor to cover up the sounds of toy construction.  As a child, I had an active imagination.

The Third Stage:  You Are Santa.
This stage is hilarious, unless you have ever spent half the night assembling a pair of bicycles using directions that have been translated from Japanese into English by a computer.  (What did the bicycle call it's father?  A pop-cycle.  You start thinking like this when you hang around your grandchildren.)

It is a lot of fun sneaking presents under the tree in the middle of the night (the toys that you have hidden in the attic for weeks)--the same toys that your children discovered weeks ago.  You thought you had finished shopping early, but two days before Christmas, you realize that Santa forgot to find this year's must-have tickle-me-cabbage-stretch-wii thingy.  In blue.  So Santa will have to go back to the MallWart.

Have you ever looked for a good hiding place for a present only to discover a present you bought last year--early--and forgot about?  This is actually something that only happens to The Doc.  Since, I am a man, I have never bought a Christmas present early.

You will start assembling all this junk very late at night, because just about bedtime you will remember that you need a lot of batteries.  Nine volt, double A and triple A batteries are required for everything you bought, and the only place still open is the local convenience store.  Batteries at a convenience store cost more than a kidney transplant, but it is Christmas, so you just shell out the money.  That's Santa's job.

I would be willing to bet that over the years comprising my career as Santa, I spent more on toys, batteries, and holiday food than it cost my father to buy his first house.  For the life of me, other than a couple of bikes, I cannot remember a single gift that Santa brought the boys.  And I would be very much surprised if any of that stuff still survives.

The Fourth Stage:  You Look Like Santa
Alas, there is no denying it--I'm there.  There is more white in the beard than brown and the hair is decidedly more salt than pepper.  The waist band that moves in and out is now mostly out.  What were laughingly called love handles a few years ago have now sadly turned into a death grip.  I could easily pass for Santa.

I have arrived at that stage of life where I avoid Wal-Mart, not only because of the crowds, but for the simple reason that every time I enter the store, someone tries to hire me to be a greeter.

So now, as a grandparent, it is my job to promise my granddaughters that Santa will bring them everything their hearts desire.  Preferably, stuff that needs lots of batteries--so their parents can run frantically around town trying to find the latest Princess-Twilght-I-Pooed thingy.  In pink.  Who said payback wouldn't be a perfect Christmas gift for your kids when they have kids?

Epilogue
Recently, I had a sudden insight into the secret identity of Santa!  While I do not know who he really is, I have noticed a few clues.  Consider the following:  Santa is rarely seen, but you can regularly see his assistants.  Santa is very old, but no one ever talks about him retiring.  Santa doesn't really do that much himself, but directs the work of a lot of assistants who are poorly paid--yet he gets all the credit.  Santa doesn't keep regular hours and doesn't work anything close to 40 hours a week--and Santa travels a lot.

I'm not sure who he is, but obviously--Santa is a tenured full professor at Enema U!