After recently reading a John Grisham novel, I have been thinking a lot about peremptory challenges; the right for an attorney to reject a limited number of potential jurors without having to give a reason.  This is in addition to the right to reject a juror for cause (an obvious bias that might keep the juror from reaching a fair verdict).

A peremptory challenge is a challenge based on just a hunch, and it is used to eliminate the odd duck who just doesn't fit.  I like this idea, and think that we could use the same principle on a number of occasions, both political and social.  Of course, this power would have to be used wisely, so I volunteer my judgement.  You're welcome!

The Supreme Court.  Probably no single American agrees with the opinions of all of the Supreme Court justices. Today, the country is so politically polarized, that most of us believe that about half the court should be replaced immediately.  Obviously, this can't happen.  For most of the justices on the court, I have to admit that on a regular basis, I am either surprised by how they voted or astounded at the logical arguments they present to back up their opinions.  Except for the two judges for whom I have accurately predicted how they would vote for over a decade.  Not once have they surprised me in the least with either their written opinions or their legal arguments.  Frankly, they are as useless as an Athletic Director, and since they always vote against each other, both can be safely eliminated.  I am, of course, talking about Clarence "Don't Wake Me" Thomas and Ruth "Buzzi" Ginsberg.  From both the right and the left, let's eliminate both of them and start over with two new judges.

The House of Representatives.  Obviously, we must challenge a congressman from each party--But, what should be our selection criteria?  God knows, the entire bunch should be thrown out on the simple basis of common sense--these leeches have turned what was supposed to be a short term opportunity to serve their country into a lifelong sinecure for bloated plutocrats, with a lower turnover rate than that of England's House of Lords.  No, there is only one fair way to exercise a peremptory challenge on two Congressmen: Intelligence.

So many choices and only two challenges....

For the Republicans, it has to be Representative Louie Gohmert from Texas.  To be fair, Gohmert may be more deranged that dumb, but to quote Forrest Gump, "Stupid is as stupid does."  Gohmert seems obsessed with issues that some of us weren't even aware of.  During a House debate on the military's "Don't Ask/Don't Tell" policy, Gohmert began raving about bestiality and necrophilia!  And Gohmert has frequently warned his constituents to be on the watch for "terror babies"--infants legally born here to visiting Al Qaeda operatives who will take advantage of their legal citizenship to attack America after they are grown up.  I have read his speech about "voting for a black man" several times and have absolutely no idea what he is talking about.  (Probably, neither does Gohmert.)

The Democrat choice must be Sheila Jackson Lee, also from Texas.  Congresswoman Lee (despite having served on the House Subcommittee for Space and Aeronautics), while touring JPL once asked if the Mars Rover could could take pictures of the American flag left there by the astronauts.  One of her ex-staffers once confided that he was astounded she hadn't complained of cost overruns on the Death Star.  Her stock in trade is to denounce something as racist, which she has done to causes as diverse as Pepsi Cola and the names of hurricanes.  A once stalwart defender of Enron, she has supported Iranian military exercises and sales of F-16 parts to Hugo Chavez.  The nation (and both parties) would gain from the exit of these two representatives.

The Senate.  Continuing in the bipartisan spirit, let's drop a senator from each party.  It won't change the political makeup of Washington, the balance of power will stay exactly the same, and we can let each political party pick a replacement.  Let's pick two senators who are both ideologues, two senators whose primary purpose in life seems to consist of endlessly repeating the inane talking points from his political party.  These two men are actually a hazard to anyone standing between them and a working television camera.  I invoke the peremptory challenge to Senators Chuck Schumer and Ted Cruz.  It is way past time for both of them to go home and shut the fuck up.

TV Commercials.  What are the opposite ends of the television commercial spectrum?  Personally, it would be so satisfying to simply eliminate all the commercials made by Cancer Center Peg and Mesothelioma Doug.  (They have an illicit love-child who makes commercials for sufferers of Reptile Dysfunction.)

After some serious thought (any thinking done while drinking scotch) and quiet contemplation (while watching Top Gear) I finally realized what the opposite ends of the commercial spectrum would be.  All we have to do is eliminate all advertising for television reality shows that do not guarantee the fiery deaths of at least half of the contestants.  To balance this, we ban any fund-raising commercials to provide care for fly-covered children in Africa.  I see no reason to send any money overseas when there are needy, fly-covered History departments in this country. 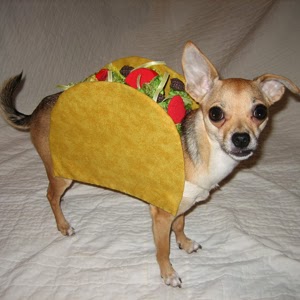 Fast Food vs. Fine Dining.  Here, the choices are extremely difficult.  There are so many fast food places that deserved to be destroyed.  At Colonel Sanders, the "Drive Thru Window" sign is clearly a plea for justice.  McDonald's claims to have served billions, yet they are only on their second cow.  But, if we can only eliminate one single fast food restaurant, it has to be Taco Bell.

Periodically, Taco Bell announces a new menu entrée--usually something along the lines of the Chimi-Grande-Taco-Rita.  Evidently, they believe we are too stupid to notice that every single item on the menu uses the same damn 5 ingredients:  ground meat, cheese, tomato, lettuce, and a tortilla.  I said ground meat, not ground beef, because it doesn't taste like beef and have you noticed that none of us has seen that chihuahua lately?

Besides, as we say here in New Mexico, "La comida Mexicana sin cerveza es como hacer el amor sin  besar."  (For you pendejo gringos, that means "Would you like imitation refried beans with that?")

On the other end of the spectrum, it pains me to say we have to eliminate Ruth's Chris Steak House.  This is a fantastic restaurant, but there is simply no choice.  Not only does a steak there cost more than either of my first two cars, but simply watching the television commercials raises my cholesterol count to dangerous levels.  If I ever decide to commit suicide, I will do it by eating there for a week.  I'll have a heart attack and exhaust my children's inheritance simultaneously.  In the unlikely event I live to eighty, I may live in this restaurant.  Between meals, I'll smoke large fat cigars wrapped in bacon.

I admit that this is a work in progress.  There are so many areas where a peremptory challenge would be useful, but this needs more thought (I'm running out of scotch.)  Would the Humvee be an acceptable choice for the elimination of the Chevy Volt?  Some might point out that production of the Humvee has already been halted, but I think this is still a fair choice as production of the Chevy Volt has never really started.