New Mexico has always been the home of the unconventional--that's a nice way of saying weird.  Think of Billy the Kid, the atomic bomb, or ex-Governor Bill Richardson.  Perhaps the truth is that this is the state where you can stage outrageous experiments and no one will notice.

On December 7, 1941, while the Japanese were busy bombing Pearl Harbor, Dr. Lyle Adams, a Pennsylvania dentist was on vacation in Carlsbad, New Mexico.  While he came for the caves, he was fascinated by the bats.  There are, in fact, four large caves in New Mexico, each with over a million Mexican Free-Tailed Bats.

The combination of the Japanese bombing and the incredible number of bats gave the good dentist a great idea:  Could the bats be used to deliver tiny little incendiary devices?  Could thousands of these little guided missiles be dropped over the cities of Japan in such a way that the bats would disperse and seek refuge under the eaves and rooftops of a city known to be filled with homes constructed from paper and bamboo? 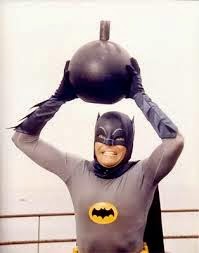 For most people, the idea would have died before the inventor had had his next beer, but Dr. Adams was a good friend of Eleanor Roosevelt, the First Lady.  When the idea was presented to the president, it was approved, and within a year was being tested on one of the hastily constructed airfields that sprang up like tumbleweeds across the sparse New Mexican deserts.  This particular air base was close to Carlsbad, where there was an abundance of bats.

Louis Fieser, the man who had just developed napalm for the military, designed tiny one-ounce incendiary bombs with timers, that could be carried by the bats.  To make the bats easier to transport, it was decided to chill the bats (forcing them into hibernation), place them in containers, and then drop them over targets at night.  Bats are nocturnal, so they would fly around seeking shelter before morning.  Shortly after dawn, the timers would set off the bombs, allowing the tiny bats to die for their country, while igniting fires all over the targeted Japanese city.

Well, that was the plan.  There were a few problems in the development, however.  Getting the bats to exit the cage was a problem.  If the bat exits too soon, it could be exhausted before it found a proper spot to roost.  Very little is accomplished if it simply rains bats over enemy cities.  And if the bat leaves too late....well, you probably understand that problem.

Eventually, all the problems were actually ironed out.  A little over two dozen trays, each containing 40 bats, could be packed inside a container shaped like a traditional bomb.  The bat bomb would be dropped at 5,000 feet, where the trays would separate and fall freely.  A parachute would deploy at 1,000 feet which would eject the individual bats out of the tray.  If ten B-24 bombers were armed with such devices, over a million "bat bombs" would descend on an enemy city. 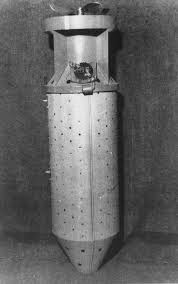 Of course, before this new super weapon could be deployed, it had to be tested.  On May 15, 1943 a partially filled bat bomb was dropped over a test facility in the New Mexico desert.  To be fair, it was an accidental testing--they didn't mean to actually drop the armed bomb.  But, the bat bombs did work!  Among other things, the bats destroyed a hangar, a fuel truck, a general's car, and a couple of barracks!  (This raging success was accomplished with only six bats!)

Immediately, the project was transferred to the U.S. Navy, who gave it the code name Project X-Ray and turned it over to the Marine Corps for further testing.  When the Marines tested the device over a mock-up of a Japanese city in Utah, the weapon proved devastatingly effective.  It was calculated that using conventional incendiary devices, a fully loaded B-24 might produce as many as 400 fires.  The same plane loaded with patriotic pyromaniac bats could produce 4000 fires.

The bats never made it into actual combat.   After several years of testing and an investment of several million dollars, Admiral King cancelled the project when he learned that the device wouldn't be ready for use until the middle of 1945.  Simply put, the batty project was abandoned in favor of the atomic bomb.

So, in the end, America's first "smart-bomb" was never used in combat.  Neither was our anti-tank dog--but that is a story for another time.