Battle of the Nile

The French navy has been in the news this week: it seems that while the rest of the world is trying to figure out a way to isolate Putin for seizing the Crimea, France is going to sell him two modern warships.  This is probably not something we should worry about—the words ‘French’ and ‘Navy’ have not belonged together in a sentence for over 200 years.  Naturally, I’m going to give you an example.

By 1798, Admiral Horatio Nelson had been in the military serving his king since the age of 12, serving on both land and sea.  He had lost his right eye fighting the French in Corsica, he had fought the Spanish in Nicaragua, and he had lost his right arm fighting the French near Tenerife.  (In more ways than one, the navy had "made" Nelson.)  Severely wounded when his lone ship captured two French warships, he was hospitalized for months, and when he returned to the fleet in 1798, he had been promoted to Rear Admiral.

This was a dark time for England.  On land, Napoleon Bonaparte seemed to be invincible.  France had found a prodigy whose skill matched his ambitions, and that was unusual.  This is probably where I should point out a great military truism:  The French Army can win, but only if led by a schizophrenic teenaged girl or someone who is not French (Napoleon was a Corsican).

Napoleon had a plan.  He knew that he could not invade England without naval supremacy, and while France was furiously rebuilding her navy, Napoleon knew it would be years before France was ready to challenge England.  Where else could the British be challenged?  Bonaparte eventually came up with the plan to challenge England’s Far East trade with a campaign in the eastern Mediterranean.

England was hardly strong in the Med, since by this point, Italy was already in the hands of France.  The English knew that Napoleon had left France with a fleet, but what was he planning?  Nelson commanded a thin column of ships which was sent to the Med to discover what was up--and more important--to find and stop Napoleon.

During the voyage, the young admiral--not yet 40--spent the time instructing his captains.  Nightly, he gathered them on his flagship and drilled them in his methods and plans for an attack.  Every eventuality, every contingency, was discussed, and practiced on paper during the trip.

Napoleon called his captains his "Band of Brothers", taking a line from Shakespeare’s Henry V.  He was, in effect, charging each of them come the day of battle to behave like the heroes of Agincourt, giving each of  his subordinates respect, responsibility, and authority.  This was such a proven formula for success, that even today, no one uses it!

Of course, even as time helped Nelson, it was also aiding the French, who, led by Admiral Bruey, spent the time to making their position impregnable.  He anchored his fleet in a sandy bay, protected by shoals, with one flank anchored near the shore, the other end of the line of ships extending to an island where a fort had been built.  The admiral had placed his ships close to shore so that he was certain that the English ships would only be able to fight on the starboard side of the French ships.  This allowed the ships to move the gun crews and some of the cannons over to the starboard side, in order to concentrate their fire on the approaching English ships.

Admiral Bruey must have smiled while reflecting upon his perfect position.  Records show that on the morning of the battle, even though he knew that Nelson's fleet would be upon him before the day was over, he let parties ashore to gather fresh water.

The French had a perfect defensive position that would lead to a perfect victory for Nelson. 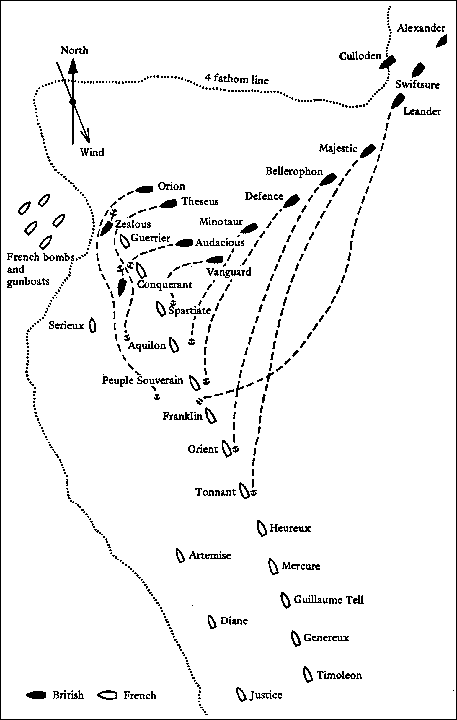 Nelson had to sail into the bay under the concentrated fire of most of the French fleet, which lay in a slight curve, and as the British fleet sailed in, Nelson could hardly believe what he saw.  The French flank was close to the shore, but not anchored completely.  A skillful captain could sail around the end of the French fleet and attack from inshore!  And while the guns of the ships pointing out to sea were undoubtedly loaded, manned, and ready to fire…  The remaining port battery of guns were most likely unloaded and useless.

Other captains noticed that the interval between the French ships was too wide, there was room for a skilled captain to sail through this gap, raking the enemies on both sides as he went.

In all, four English ships sailed around the French flank.  These ships, like all of Nelson’s fleet, anchored in position and began to fire on the French fleet.  The English flagship and all succeeding ships sailed down the seaward side of the French line, firing at every ship as they passed until every ship was anchored alongside a French ship.

As the sun set, gun-flashes and burning ships lit up the night sky.  Nelson later wrote in his dispatch, “Each knew his duty.  I was sure each would feel for a French ship.”

Nelson was on the HMS Vanguard, on the deck, observing what he could of the entire operation.  As always seemed to happen to Nelson, he was wounded, getting a long gash in the forehead above his sightless right eye.  Head wounds bleed profusely, even the smallest cut to the forehead bleeds like a fatal wound.  Nelson thought he was dying, and though forced below to the surgeon, he refused medical attention until the sailors were treated first.  It took a while to convince him he was going to live.  Nelson had just returned to the deck to witness the witness the most spectacular event of the night.

At about 10 at night, the French flagship, L’Orient, was seen to be burning out of control.  Men were jumping overboard.  Suddenly, the ship blew up.  The roar was so loud that every ship in the bay stopped fighting briefly, believing they had been hit.  A tremendous blazing column of fire blew into the air, showering burning debris down on several ships, setting fire to the sails of the HMS Alexander.

French Admiral Bruey died in the loss of the flagship and the few ships that were left retreated under the command of Rear-Admiral Pierre Villeneuve.   Later, Napoleon did not praise this admiral’s escape, but somewhat sarcastically referred to him as ‘Lucky.’  (Napoleon was more than capable of holding a grudge.  A few years later, when Admiral Villenueve was found dead in an inn, stabbed seven times in the lungs and heart, it was ruled a suicide.)

As the sun came up on August 2, 1798, it showed one of the most unusual scenes in naval history.  “Victory is not a name strong enough for such a scene,” said Nelson.

He was quite right: this was his masterpiece, for Nelson always preached "completion".  Three French battleships—including the flagship—were destroyed, while 9 were captured.  Thousands of French sailors were wounded, killed, or captured.  The British did not lose one ship.

Nelson exploited his triumph.  Ships were repaired, the captured French ships were made-seaworthy and  given to English officers, dispatches were sent--in duplicate, a blockade was organized on the Egyptian coast, and an officer was sent to carry the news to the East India Company in India.  The Directors of this company were so grateful for Nelson’s actions that they sent him a present of  £10,000 (British pounds, equal to about $14 MILLION USD these days--not a bad "gift"!)

The effect of this battle was like an electric shock sent across Europe, because it was the first real military defeat of Napoleon.  The French army was cut off in Egypt and Napoleon, in order to escape, was forced to abandon the army and return to France secretly.  His plan to invade India was a failure and was abandoned forever.

In London, when Lord Spencer, the head of the Admiralty, heard the news, he fainted.  Nelson won a peerage from a grateful king.

You may know a little about this battle, if for no other reason than you might have heard the poem about the loss of the L’Orient.   Here is the first verse:

The boy stood on the burning deck
Whence all but he had fled;
The flame that lit the battle's wreck
Shone round him o'er the dead.

The poem is Casabianca,  In it, Giocante, the young son (his age is variously given as ten, twelve and thirteen) of commander Louis de Casabianca remained at his post as ordered and perished when the flames caused the gunpowder magazine to explode.  The rest of the poem is dramatic-if not quite accurate:

The flames rolled on—he would not go
Without his Father's word;
That father, faint in death below,
His voice no longer heard.

And so forth and so on for verse after verse until we get to:

With mast, and helm, and pennon fair,
That well had borne their part—
But the noblest thing which perished there
Was that young faithful heart.

This poem was published in the 1866 edition of McGuffey’s reader and stayed in American lore forever, though by my generation it had magically turned into:

The boy stood on the burning deck
Eating peanuts by the peck;
His father called, he would not go
Because he loved those peanuts so.

Strangely, some of you may have unknowingly seen a representation of the battlefield.  Years after the battle, Emma Hamilton, the mistress of Lord Nelson was in her declining years.  She complained one day to her friend, the Marquise of Queensbury, that while it was possible to visit a battlefield on land, it was impossible to do that with any of her former lover’s great naval battles.

The Marquise owned a large amount of land, including the town of Amesbury, and most of the surrounding farmland known as the Salisbury Plain.  A beech forest was carefully cut to represent the shoreline, and clumps of trees planted to represent each ship.  Known as the Nile Clumps, as far as I know, this is the only naval battlefield you can walk through.

You may have seen them--today, they are about a mile away from, and on the other side of the highway from the Marquise’s other tourist attraction: Stonehenge.