In the Beginning, There Was the Book

Stop me if you have heard this story before:  Even as an infant, our hero had already exhibited unusual strength: he could lift heavy furniture and he demolished his crib with a single hand.  Then, as he grew older--in an effort to live a normal life--he kept his incredible abilities secret from the other children, adopting a meek (some might say "boring"), life style.  He grew into a handsome young man, who had a splendid physique and his black hair was so dark that it was almost blue.

As he grew older, his strength increased.  He could leap to dizzying heights, he was faster than a speeding locomotive, he could bend iron bars, and bullets bounced off his chest.  He built himself an isolated fortress where he could learn to use his powers.  So amazing were his abilities that he was referred to as The Man of Iron. 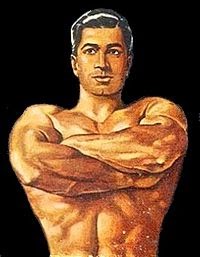 Of course, you know this story--the hero is none other than Hugo Danner from the book, Gladiator, written by Philip Wylie in the 1920’s and first published by Book League Monthly in March of 1930.  Were you--perhaps--thinking of someone else?

Obviously, this sounds a lot like Superman, but Gladiator was in print eight years before the first Superman comic book hit the stands.  Joe Shuster and Jerry Siegel, the creators of Superman, claimed that the inspiration for the character came from the John Carter stories of Edgar Rice Burroughs.
Perhaps this is true, but some of the dialogue in the first Superman comics closely (very closely, in fact) matches the Wylie book.  And, six years before the premier of Superman, Siegel published a favorable review of Gladiator.

There are some crucial differences, however.  First of all, Hugo (the picture above was from the book) was not an alien from another planet, but the result of a scientific experiment, in which his scientist father injected a serum into his wife while she was pregnant with Hugo, thus changing the infant's  molecular structure.  Hugo’s powers were not hereditary, but could be duplicated by treating other expectant mothers in the same way.

Fundamentally, Hugo was a much more complex character than Clark Kent.  Hugo struggled to hide his talent his whole life, he tried to fit in with the rest of humanity, and he tried to find a use for his powers.  Whereas Superman easily found admiration, in Wylie’s world, Hugo's superhuman abilities elicited envy, jealousy, fear, and ultimately hatred.

Hugo Danner tried over and over to find a useful role in society.  He worked as a circus strongman, a merchant marine, a farmer, a pearl diver, and eventually enlisted as a soldier in the First World War.  While he was successful in every activity, he remained friendless and unhappy.

As a child, I read Superman comics and watched the George Reeves television version of the storyline.  As an adult, I think I have also seen most of the movies--but it was not until I read the Wylie book that it occurred to me how isolated such a person would actually be, had he existed.  His abilities would completely separate him from the rest of mankind.  Wylie is probably correct--such a "gift" would destroy a man.

Toward the end of the book, when poor Hugo began to hate the inferior humans who feared him, he said “I defy you with all my strength, to think of what I can do to justify myself!”  Possessing neither a cape nor a secret identity, Hugo never received an answer and his loneliness turned to rage. 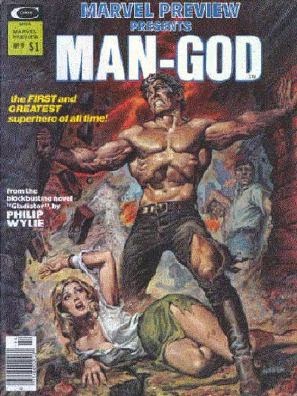 Spoiler Alert.  I must warn you that I am about to reveal the ending of the book.  Revealing the ending to a book is a high crime so heinous that normally I only inflict it on first class passengers on planes I am boarding with the rest of the peons.  But, since I doubt that many of you are interested in reading an 85 year-old obscure science fiction story, I hope I will be forgiven.

Eventually, Hugo was convinced that as there was no way he could live with humanity, he so must create a society of supermen where he could live with his equals.  Brushing briefly on the subject of eugenics, Wylie took his hero to a mountain top, deep in the Mayan jungle, where Hugo knelt and asked God’s blessing to begin duplicating his father’s experiment.  Was it okay to create a race of supermen?

God promptly killed Hugo off with a bolt of lightning.

That should have been the end of the story--but over the last few decades both Marvel and DC Comics have sporadically published comics featuring Hugo Danner.  It turns out that even God couldn't kill a super man.