Several weeks ago, I wrote about a ship that, over time, was a warship in service for six different countries.  Today, I want to discuss a ship that was—for a while—the largest ship in the world.  During her lifetime, she had four names, had almost as many nicknames, was owned by three different countries, and was the most magnificent and luxurious ship afloat...and today, few have ever heard of her.

During the end of the Edwardian Era, the major countries of Europe began an informal contest to develop the largest, fastest, and most luxurious ships afloat.  In the minds of many, there was no better symbol of a country's honor and power than the size of her merchant navy.  Kaiser Wilhelm, jealous of (his uncle) King Edward's naval power, was encouraging his country to construct the largest ships ever built. 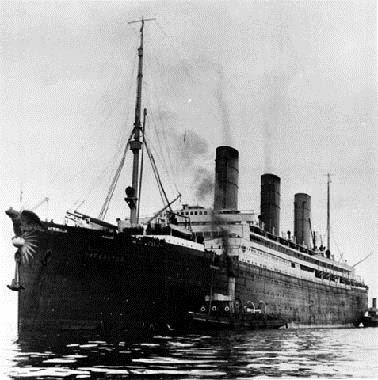 Germany knew of the soon-to-be-completed Titanic and her sister ships, and began drawing up blueprints for three ships that would surpass her in every regard.  The Europa, was to be larger, longer, faster, and in every regard more impressive.  Curiously, while England and Germany competed with each other, they both fashioned the interiors of their ships after French style, but if the Titanic and the Olympic were to be French villas, the Europa was to be a chateau.

Almost immediately, the Cunard Line announced that there new ship, the HMS Aquitania would be slightly longer than the Imperator, so a large bronze figurehead of an eagle was added to Imperator's bow, once again capturing the title—only to lose it again a few months later to her sister ships, the Vaterland and the Bismarck.  (No, not that Bismarck.  That ship was a warship sunk in World War II.)

On her major voyage to New York, a few problems were discovered.  The ship was top heavy and took to listing almost uncontrollably.  Irreverent dock workers began referring to her as the 'Limperator.'  Hamburg America, the owners, took drastic action.  The bathrooms of most of the upper staterooms lost their marble fixtures.  In many places, the heavy Louis XVI furniture was replaced with wicker.  When even this was inadequate to fix the problem, the hollow space between the double bottom hulls was filled with 4 million pounds of cement.

Now repaired, the ship returned to service, and almost immediately was left tied to a dock in Hamburg for the entirety of World War I.  For four years, she was neglected and abandoned.  When the war was over, she was turned over to the Allied Food Service and Finance Commission.

The ship was taken from Germany as part of the massive reparations that Germany had to pay in apology for having started World War I.  (If you remember, the war was started by when an Austrian inbred Hapsburg was assassinated in Sarajevo by an angry Serbian, prompting Austria to declare war on Serbia, followed by Russia declaring war on Austria, and so forth and so on.  If you find this confusing because Germany is not mentioned in any of the above....well, just remember that last week I told you the Seven Years War lasted nine years.  If we made this shit easy, then just any moron could be a historian.)

The ship was turned over to the Americans and used as a transport ship to help bring home the one and a half million doughboys we had sent to France.  Now, part of the US Navy, we renamed the ship the USS Imperator.  After bringing home roughly 25,000 Americans, we turned the ship over to England.

The Cunard Line had lost her flagship, the RMS Lusitania to the Germans in 1915, so it was deemed only fair for the German Hamburg Line to lose their flagship to Cunard.  Renamed the RMS Berengaria, she was heavily—and expensively—refitted to assume her new role.  The ship still tended to list to one side or the other, so Cunard added a few million pounds of scrap iron as ballast.  (One can only imagine what the now deposed Kaiser thought of this.  Exiled to Holland, he had to watch his ship, designed to humiliate the British, now renamed after a British queen.) 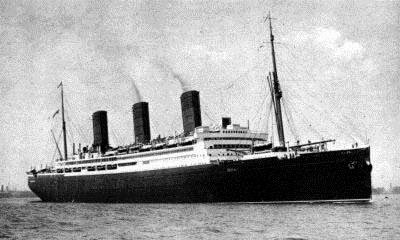 For decades, the Berengaria was the ship of choice for the rich and famous.  The Berengaria was referred to as the 'Millionaire's Ship.'  First class passengers were especially fond of her two-story indoor swimming pool, patterned after the baths of Pompeii.  Evidently, the irony was lost on them.

By the Thirties, the ship's glamour was beginning to fade.  She was replaced as the flagship by one of her sister ships, the former Bismarck, now renamed the RMS Majestic.  No longer sought after by the rich and famous, in her later years, she did short cruises from New York for passengers seeking a legal way to get around Prohibition.  Now, she was nicknamed 'Bargain Area.'

When Cunard finally retired her, they introduced a new queen, the Queen Mary.  The ship built to humiliate the British was brought back to England and scrapped.  And much of the salvaged metal was used to fight Germany in the next war.
Posted by Mark Milliorn at 12:04 AM