Football Returns to Enema U

Once again, it is that time of year when the administration struggles to ramp up a trickle of school spirit for our football team.  I have never actually understood why this is so important, but ever since the state legislature started a poor football team with a small university attached to it, having a season good enough to warrant an invitation to a bowl game has remained the unobtainable goal for longer than the last half a century.

We ain’t very smart, but we are faithful.  Of course, you can say the exact same thing about churchgoers and dogs.

The university is still reeling from last week’s decisive loss to a top-ranked team by only a few score of points.  This was one of those blood games, where good teams get to polish their skills by beating the holy hell out of smaller, and less experienced teams.  This is a win for everyone:  fans at the other school get an easy victory to start the year, Enema U gets a fat paycheck, and the Enema U team gets to learn from experience.

That last point—learning by losing badly to a superior opponent—is universally recognized as the surest path to improvement.  This is, of course, why today's French Army is a superpower feared all over the world.

Several years ago, I had a student in one of my classes who participated in one of those blood games.  This young man was enormous:  every time he walked into my classroom, he filled the doorway.  And while he was an excellent student and very good natured, every time he came into the room, I would start to look around for something to hit him with...just in case.

After the team had participated in one of those blood games—against the number one ranked college team in America—he returned to my class with a fresh viewpoint about playing the sport.


“Those guys,” he confided to me, “were as big to me as I am to you.”
Not that the school is not trying...We have built a multi-million dollar scoreboard, and the opposing teams use it regularly.  We have built a multi-story sports chalet at one end of the field, so the large-dollar donors who enjoy going to the game can….not really be at the game.  (That one may need to be rethought.)  Currently, we are spending some big bucks to renovate the press boxes in a desperate attempt to solicit sympathy from the sports reporters.  (Also, in case of bad weather, it’s possible that both fans could retreat there to get out of the rain.)
Obviously, I have a suggestion...One that has already (sort of) proven successful.
In 1944, major league baseball was in serious trouble:  quite a few of the better players—as well as millions of fans—had either enlisted or had been drafted to fight in World War II.  The sport was so desperate for talent that team roster contained men in their forties and youngsters too young to enlist—one as young as fifteen.  With game attendance suffering, a few of the New York sportswriters came up with a wild—and patriotic—way to boost attendance.
A three-way baseball game was organized between—or rather—among the three professional teams in New York.  The Yankees, the Giants, and the Dodgers would play in a single game, using a rather complicated rotation scheme worked out by a slide-rule-equipped Columbia University mathematician.

Each team would both field and bat for two innings, then would sit out an inning, before coming back to bat.  After nine innings, each team would have been at bat for 6 innings:  three innings each against both of the other two teams.  There was a small problem with three teams sharing two dugouts, but since the Giants and Dodgers were both in the National League and were intensely bitter rivals, the Yankees—from the American League—shared a dugout with the Dodgers and left the home dugout to the Giants. 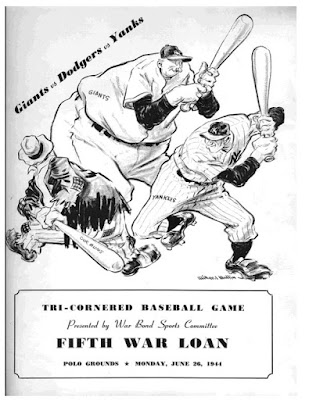 The game, nicknamed the Tri-Cornered Game, was an incredible success.  No tickets were sold, but anyone who bought a war bond was admitted for free.  With a total attendance of 50,000, the patriotic fans raised a total of over $55 million dollars (or roughly $750 million in today's dollars).
There were supposed to be three ceremonial first pitches thrown out by Mayor Fiorello LaGuardia, but the strain of the first pitch was too much exertion for the mayor, so the next two pitches were cancelled.  Milton Berle entertained the crowd as 500 wounded service men were brought into the stadium.  The Coast Guard band played, and there was a rather strange contest to see who could hit the longest fungo.  The winner was an eighteen-year-old rookie with the rather unlikely name of Calvin Coolidge Julius Caesar Tuskahoma McLish.  (For those of you who don’t know, a fungo is when a player tosses a ball into the air and then hits into the outfield, usually for fielding practice.  And Tuskahoma is Choctaw for Red Warrior.  Obviously, McLish’s parents had a sense of humor.)
Scoring was a little complicated, but by the end of the game the Dodgers came in first, the Yankees, second, and the Giants, last.  And there is the point to all of this:  there were two "winners" and only one "loser" in this game.
If Enema U could play a three-cornered football game—possibly with one team resting each quarter while the other two teams played—this would improve our odds of not coming in last by 50%.  We would be doubling our chances of beating another team.
Who knows?—If this new way of playing turns out to be profitable, eventually, they could rebuild the stadium—always a popular idea with an administration suffering from an Edifice Complex—so as to accommodate a three sided playing field, thus allowing a dramatic increase in the number of seats in the stadium.  Currently, most of them will remain empty, but there’s always hope for next year.
Posted by Mark Milliorn at 12:01 AM