One in a Thousand

The American Civil War occurred at an unfortunate point in technological development: quite simply, we had just gotten very good at killing each other.


In the first few battles, generals were shocked by the large number of casualties—and those who were wounded had devastating wounds.  This new lethality was the result of recent improvements in rifled barrels, consistently performing gunpowder, and bullet designs.  Suddenly, the average rifleman could reliably kill at 400 yards, reload quickly and do it again.


This was the dawn of the Industrial Revolution and improved technology would make this the deadliest war in American history.  Railroads, steamships, improved metallurgy, better metal casting—all of these contributed to making the war a bloodbath.


Even so, it could have been worse:  the war stimulated innovation and rewarded creativity, particularly in the field of weapons, which improved dramatically.
Note:  It is a sad commentary on the human race that we show our best creativity while trying to murder each other.  Look, for example, at the Second World War:  at the start, we were flying fabric-covered biplanes, but by the end of the war, sleek metallic darts were creeping close to the speed of sound, powered by jet and rocket motors.  If you were to chart the progress of wartime technology (and had the war lasted another ten years), the Big Red One would have established a beachhead on the moon.

The casualties of the Civil War could have climbed dramatically if overly conservative generals had adopted repeating rifles when they had the chance.  Two rifles in particular—the Spencer and the Henry—could have dramatically changed the course of the war if they had been widely adopted.  (I have already written about the Spencer, Lincoln's favorite rifle.)

The Henry is a 16-shot, lever-action rifle that utilizes the (then) new metallic cartridges that were so popular with the soldiers.  Operating the lever ejects the spent cartridge casing, loads a new round, and cocks the weapon's hammer so quickly and smoothly that in the hands of an experienced marksman, the rifle sounds like a slow-firing machine gun.  Impervious to weather, easy to load, and rapid-firing, the rifles, while more expensive than the commonly used Springfield muskets, were a dramatic improvement in technology and lethality when introduced.


Despite the proven effectiveness of the rifle, the Federal Ordnance Department purchased only 1,731 Henry rifles, but thousands more were sold directly to the men.  Over 200 men in the Illinois 7th, dissatisfied with the single-shot rifles they had been issued, purchased their own Henry rifles, despite the astronomical cost of $50 per rifle.


It wasn't long before the rifle was known in the south as "that tarnation Yankee rifle they load on Sunday and shoot all week."


Ironically, the very companies that had profited from the war, went bankrupt because of the peace that followed it.  The federal government no longer had a need for so many weapons, and sold off the surplus arms—including the Spencer and Henry lever action rifles—for as little as $2 each.  Effectively, the arms companies were priced out of the market by their former best customer, who was selling their own products below cost.


Oliver Winchester was a businessman who had become rich manufacturing and selling shirts, and had used some of his earnings to invest in industries manufacturing war goods for the government.  When the firearms companies began failing, Winchester bought up the company manufacturing the Henry and renamed it the Winchester Repeating Arms Company.  Within a short time, he also bought the rights to the Spencer rifle.

By 1866, a new improved version of the rifle had been produced, the Winchester 1866, commonly called the "Yellow Boy" because of the brass receiver.  This rifle had two important improvements;  a wooden forearm was added (the previous rifles were painfully hot to hold after a few rounds were fired) and the tubular magazine under the barrel was sealed and a loading gate was added to the receiver, facilitating reloading.


In the years following the Civil War, two events changed the Winchester:  the first was the rise of the metallic cartridge—the day of the paper cartridge was over.  The second, was the advent of the efficient revolver using those metal cartridges.  The Colt Firearm Company introduced the Colt Single Action Army, a six-shot, reliable revolver—the famous Colt Peacemaker—in 1873.  That same year, The Winchester Repeating Arms Company released the Model 1873, changing the world of firearms forever.


The new Winchester rifle was much stronger, manufactured from steel rather than brass, and was chambered in a new more powerful cartridge, the .44 WCF (Winchester Centerfire).  The new rifle/cartridge combination was reliable and powerful, and quickly became the most popular firearm in America—so popular that Colt was forced to offer its revolver using the same cartridge.

This combination made both guns far more popular than the addition of either would have by itself.  Cowboys liked the convenience of having a rifle and a pistol that both used the same powerful cartridge.  The general store in almost any settlement in the West might not have a lot of inventory, but it certainly had a box of .44 ammo on the shelf.


This rifle was, and still is, used by almost everyone.  Outlaws and peace officers, Indians and settlers—everyone used it except the military, that is until Colonel Custer and and his men were wiped out by Lakota armed with rapid-firing Winchesters, causing the military to finally change its mind about using the Winchester.  It did not take long for the rifle to be used all over the world.  Even today, the .44 Winchester has killed more game—and people—than any other rifle.  Within a few years, the Winchester became the rifle known as the "Gun That Won the West."


By 1875, Winchester began making a limited edition of the 1873 Winchester, the "One of One Thousand."  Hand-crafted and fitted, the rifle had special stocks and case-hardened blueing.  The highly sought after rifles originally cost roughly $100, and if you have one of the 136 that were manufactured, it will bring over $500,000 at auction.


In 1950, James Stewart starred in Winchester '73, a movie about one of the rare One in One Thousand rifles.  If you watch it, you can actually see one of the rare rifles.  The movie, set in the year 1876, also inexplicably features a Winchester Model 1892.


The 1879 Winchester made Oliver Winchester incredibly rich.  When he died, the company passed to his son, William Wirt Winchester, who died less than a year later.  The wealth and almost half of the company stock passed to his wife, Sarah Winchester.  Sarah, unfortunately, believed that the ghosts of the people killed with the various Winchester rifles were haunting her. 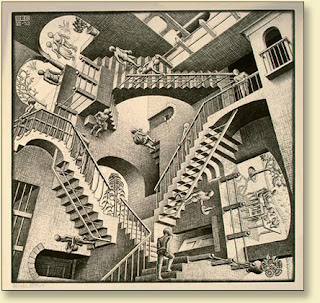 Fleeing the spirits of fallen soldiers from around the world, Indians, outlaws and rustlers, Sarah moved from New Haven, Connecticut to San Jose, California.  Somehow, the ghosts of the slain still found her, so Sarah began construction of a home that could trap and confuse the spirits that chased her.  Beginning in 1884 and continuing until her death in 1922, the Winchester Mystery House (pictured at right) was under continuous construction.  Almost 5 acres in size, the house had over 160 rooms, three elevators, and two ballrooms.  The house featured stairs to nowhere, false doors, and a labyrinthine floor plan that changed so often that even the number of floors in the house changed over time.


Did Sarah really believe that she would perish if the house was completed?  Was she really trying to trap the lost souls killed by Winchester rifles?  The answer is one in a thousand.