In the news this week is a 12 year-old suicide bomber who murdered over 50 people, mostly women and children, at a wedding in Turkey.  Another young would-be martyr was captured in Iraq.  The likelihood that ISIS would continue to use children to fight its war has many of the talking heads on the nightly news making wild statements on how the United States should fight this new threat. 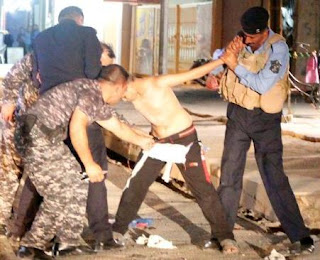 I certainly do not have an answer, but I would like to point out that this is not the first time our country has faced this problem.  A little over a hundred years ago, in a war no one remembers, we faced the same dilemma. It was in a war properly called The Philippine Resistance—an offshoot of the Spanish American War of 1898.

After suffering military defeats in the Philippines, Cuba, and Puerto Rico, the Spanish Government sued for peace on July 26, 1898.  After two weeks, an armistice was signed on August 12, the day before Americans entered the city of Manila in the Philippines.  The entire war had only lasted a little less than 4 months and while 5,462 of the 274,000 men who served in the war had died, only 379 had died in battle.  The rest had died of malaria, typhoid, dysentery, or yellow fever.

By several measures, this was not much of a war, but the peace protocol specified that Spain would give up Cuba and the United States would annex Puerto Rico and occupy Manila pending final disposition of the Philippines.

A Peace Commission eventually drafted the Treaty of Paris, signed on December 10, 1898.  The treaty, however did not specify what to do with the Philippines, as The Commission itself was divided over the issue.

Note.  If you are ever on Jeopardy or some other game show and you are asked for the name of the treaty that ended some obscure war, just answer either the Treaty of Paris or the Treaty of Ghent:  You have about a 50% chance of being correct.

Even President McKinley was unsure of what to do with the Philippines.  (Privately, he later admitted that he couldn't find the country on a White House globe the first time he looked.)  While some Americans railed against America's growing Imperialism, others saw Asia as a fertile market of millions waiting to buy American goods.

Still others saw a chance to "save the heathens" of Asia by extending missionary activities.

McKinley finally reached a conclusion.  As he explained to a gathering of missionaries:

And one night late it came to me this way—I don't know how it was, but it came:  (1) that we could not give them back to Spain—that would be cowardly and dishonorable;  (2)  that we could not turn them over to France or Germany—our commercial rivals in the Orient—that would be bad business and discreditable;  (3) that we could not leave them to themselves—they were unfit for self government—and they would soon have anarchy and misrule over there worse than Spain's was; and (4)  that there was nothing left for us to do but to take them all, and to educate the Filipinos, and uplift and civilize and Christianize them, and by God's grace do the very best we could by them, as our fellowmen for whom Christ also died.  And then I went to bed, and went to sleep and slept soundly.

Even for a politician, that’s quite a statement.  It neatly summarizes all of American Imperialism.  We took the Philippines for:

When Spain pointed out that, technically, America had no claim by right of conquest, since American troops had actually occupied Manila the day after the armistice, we settled the point by giving Spain $20 million in compensation.

The final treaty added Puerto Rico, Guam, and the Philippines to American territory.

The Treaty of Paris did not make everyone happy in the United States.  Most Democrats, and some Republicans were against it.  Occupation was not democratic, it countered American traditional isolationism, and it could easily involve us in foreign entanglements.  Some in the military even pointed out the impossibility of defending a possession so far from home—a prediction that would prove true 40 years later.

Some worried about how such an alien culture could be blended into the American way of life.  As one elected racist said from the Senate floor, "Bananas and self-government cannot grow on the same piece of land."

Eventually, a consensus formed that the best way to save the Philippines was to take them.  The treaty was ratified on February 6, 1899 by a margin of 2 to 1.

The same month, Rudyard Kipling published the poem, The White Mans Burden.  Without satire, he calls the American people to a new duty:

Take up the White Man's burden—
Send for the best ye breed—
Go, bind your sons to exile
To serve your captive's need;
to wait in heavy harness
On fluttered fold and wild—
Your new-caught sullen peoples,
Half devil and half child.

President William McKinley issued a proclamation on December 21, 1898, declaring United States policy towards the Philippines to be one of "benevolent assimilation" in which "the mild sway of justice and right" would be substituted for "arbitrary rule."

By this time, America’s task of helping his "little brown brother" had taken a strange and violent turn.  We had forgotten to ask the Filipinos if they wanted our help.  They didn’t, and were resisting militarily.

It is ironic that before we could impose a colonial rule to help the Filipinos, we had to fight a war in the Philippines from 1899 to 1902 to crush a Philippine nationalist insurgency.  Filipino insurgents were already fighting the Spanish for independence when Dewey's fleet arrived.

Dewey's victory was due in part to the attack on Manila by Aguinaldo.  The Filipino patriots believed that they had been promised independence for their efforts and felt betrayed by the terms of the Paris treaty.

Dewey demanded that the Filipinos leave Manila.  Aguinaldo agreed, but retreated only as far as the suburbs where defensive trenches are dug.

Aguinaldo declared the Philippines to be an independent republic in January 1899 and, in response to McKinley's proclamation, issued his own.  In it, he said that "violent and aggressive seizure" by the United States was wrong and threatened war.  Hostilities broke out on the night of February 4, 1899, after two American privates on patrol killed three Filipino soldiers in a suburb of Manila.

America fought back immediately, aided by shelling the Filipino trenches from US naval ships in the harbor.  For months, the Filipino forces tried to fight back using conventional warfare, effectively committing suicide, because the Filipinos lacked the arms, the artillery, and the training.

The Filipino troops, armed with old rifles and bolos, and carrying anting-anting (magical charms), were no match for American troops in open combat, but they were very effective in guerrilla warfare.

General Ewell S. Otis was appointed commander of the US forces there and military governor of the Philippines.  The war started well for the US, as Otis pushed the rebel forces from Manila and its suburbs.  When Aguinaldo's government sought an armistice, Otis insisted on an unconditional surrender.

General Otis might have been able to crush the rebellion early had he not been faced with a problem that was totally new to American warfare.  How do you fight an enemy and win the people over at the same time?  Or as my generation would later ask, “How do you win the hearts and minds of people you are fighting?”

Aguinaldo fought back as he ordered the establishment of decentralized guerrilla commands in each of several military zones.  More than ever, American soldiers knew the miseries of fighting an enemy that was able to move at will within the civilian population in the villages.  "Pacified" ground only extended as far as a soldier's Krag rifle could shoot.

The guerrillas would not attack unless they were sure they could win and if  chased, they hid their weapons, went home and pretended they were the friendliest natives on the island—But if they captured an American soldier, he would be horribly tortured.

And the guerrillas began to attack the collaborators, calling it "exemplary punishment on traitors to prevent the people of the towns from unworthily selling themselves for the gold of the invader."

Inevitably, the American soldiers began committing atrocities of their own.

In May 1900, General Arthur MacArthur replaced Otis and with a much larger army, MacArthur cracked down.  Guerrillas would be jailed or executed.  Patrols were kept out longer, forcing guerrillas to run longer.  MacArthur also used an old Indian-fighting technique:  he hired thousands of Filipino scouts and police.

Aguinaldo was captured on March 23, 1901, by a force of Philippine Scouts loyal to the United States and was brought back to Manila.  Convinced of the futility of further resistance, he swore allegiance to the United States and issued a proclamation calling on his compatriots to lay down their arms.  When Aguinaldo made the public announcement, he was wearing a black bow-tie, a symbol of mourning.  Aguinaldo vowed to continue to wear the black bow-tie until the Philippines were granted their independence.

On September 1901, guerrillas in one of the last remaining uncontrolled provinces wiped out a US infantry company in Samar.  This was the largest military defeat since the death of Colonel Custer at the Battle of Little Big Horn.  America was shocked and demanded retaliation.

The troops ordered by General Smith to "pacify" Samar were also ordered to take no prisoners.  "I want you to kill and burn, the more you kill and the burn the better it will please me.  I want all persons killed who are capable of bearing arms in actual hostilities against the United States.  The interior of Samar must be made a howling wilderness..." 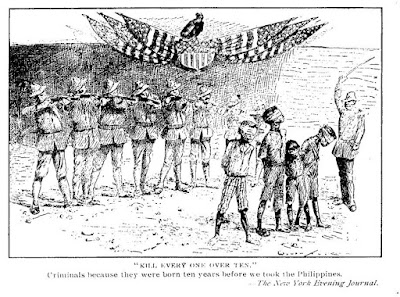 When the officer leading the detail asked for clarification as to exactly who was capable of bearing arms…his commanding officer answered that this meant anyone over the age of 10 years old.  To this day, historians argue about exactly how many Filipinos were killed during the pacification of the island.

Today, the attack and the retaliation are collectively referred to as the Balangiga Massacre.

By the Spring of 1902, organized resistance was pretty much over.  On the 4th of July, 1902, President Roosevelt declared that the insurrection was over and the United States had been victorious.  No one argued the point with him.

The war the Americans called the Philippine Insurrection lasted nearly three years and claimed the lives of 4,234 US troops and 16,000 Filipino soldiers.  By the end of the war, another 220,000 civilian Filipinos had died, largely from famine and disease.  Both sides committed horrible atrocities.  The monetary cost of the war was $400 million, an amount more than 20 times what had been paid to Spain in 1898. 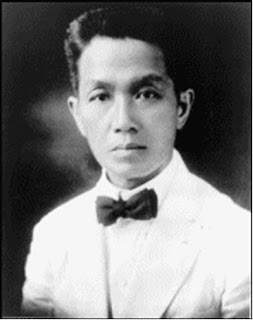 Following the suppression of the insurrection, the US established a colonial administration in the Philippines.  American teachers, nurses, engineers, and doctors flocked to the Philippines to "modernize" it and English was made the official language.  In 1908, we opened the University of the Philippines to train an elite to implement political democracy and to prepare the Philippines for independence.

This preparation was still underway when WW2 started and the Philippines were seized by the Japanese.

Aguinaldo was finally able to remove his black tie on July 4, 1946, when the US finally gave the Philippines their independence.
Posted by Mark Milliorn at 12:01 AM