The old canard that truth is stranger than fiction is routinely tested by fictional accounts that are so good and so perfect, that they replace reality.  Such is the case with the tale of a theft and a swindle so often repeated that it has been widely accepted as reality. 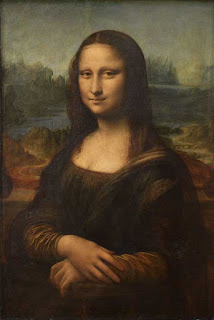 Prior to the Monday morning of August 21, 1911, the Louvre in Paris was just another art museum, and while already one of the great museums of Europe, it was not exactly crowded with tourists.  In one of the galleries, seldom noticed was the Mona Lisa, Leonardo da Vinci’s portrait of Lisa del Giocondo.  The painting, generally referred to as La Gioconda, was far from famous and generally known only to art historians.  It wasn’t even the most famous painting in the gallery, much less in the museum.

The popularity of the painting changed dramatically after one of the museum’s workers, Vincenzo Peruggia, removed the work of art from its protective wooden and glass case, wrapped the painting in his white work smock, and simply walked out of the museum.  Since the Italian handyman had been employed to enclose the paintings in their protective cases, it was relatively easy for him to remove it.  Peruggia took the painting home and hid it in the false bottom of a wooden chest.

While the Louvre had over 400 guards, it also had over 200 rooms, and this was long before burglar alarms were common.  No one even noticed the theft for 24 hours.  Only when an art student who was working on a painting showing the entire gallery (with all the paintings as miniatures), asked when the missing painting would be returned did the museum realize that it had been stolen.

At that time, La Jaconde, as the painting was known in France, had been hanging in the Louvre for 114 years.  (Except for the brief period when she hung in Napoleon’s bedroom.  It’s good to be the emperor!)

Only when the small painting on a thick wooden panel was missing did it became famous: newspapers around the world carried the story on their front pages.  The Paris police ransacked the museum in the hopes that the missing painting had been hidden, and more than sixty detectives followed up on every lead.  The homes of museum employees were searched—including Peruggia’s—without success. 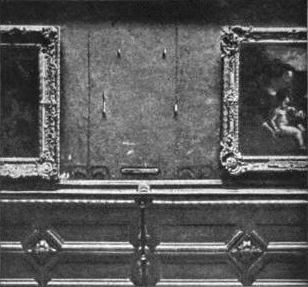 Paradoxically, attendance at the museum increased dramatically as people stood in line to view the four iron pegs where the painting had once hung.  To this day, the painting is the chief draw for the museum.  Without a doubt, it is the most famous, most copied, most valuable painting in the world—chiefly due to the theft.  Leonardo would be astounded.

With no concrete leads, worldwide speculation went crazy.  American industrialist J. P. Morgan, the Tsar, and the Kaiser were blamed.  Pablo Picasso was questioned by the police.  The famous writer Guillaume Apollinaire was jailed for five days.  The police set up roadblocks on every road out of Paris.  When the German liner Kaiser Wilhelm docked in New York, it was exhaustively searched.

Despite the proliferation of wild rumors, there were few clues and no leads.  Only after the Titanic sank did the story finally vanish from the newspapers of the world.  (But there was some speculation that the painting had sunk with the ship.  While there was indeed priceless art on the doomed ship—including a bejeweled copy of the Rubaiyat of Omar Khayyam—the painting was still safely hidden in Peruggia's rooming house in Paris.)

Why it was still there is a good question.  Few people throughout history had been in sole possession of the painting.  Leonardo, Francis I of France, Louis XIV, Napoleon, and Vincenzo Peruggia are the only men to have had the painting to themselves.  Is this why Peruggia waited so long to try to sell the painting?

After two years, Peruggia smuggled the painting to Italy, tried to sell it to an Italian gallery, and was promptly arrested.  After spending seven months in jail, he was released in time to serve in the Italian army during the first World War.  Twenty-eight months after the theft, the painting was returned to the Louvre.

When questioned about his motives for stealing the work of art, Peruggia gave confusing and conflicting answers, usually stating that he wanted to return the “stolen” painting to Italy.  Since it was Leonardo who had taken the painting to France some 400 years earlier, this was likely a calculated appeal to the court in Florence, where he was tried and convicted.

Today, the popularly accepted reason for the theft is an elaborate swindle known as the Mona Lisa Variant.  Supposedly, an Argentine con man, Eduardo de Valfierno, was the mastermind behind the theft.  Valfierno hired the famous French art forger, Yves Chaudron, to make six flawless copies of the Mona Lisa.  These were then smuggled into America before Peruggia stole the original from the Louvre.  This is an important detail, since as we have seen, it would have been difficult to smuggle the forgeries out after the theft.

Valfierno then arranged with rich American art lovers willing to buy the painting, if and when it could be stolen and smuggled out of France.  Once the potential buyers were lined up, Valfierno arranged to pay Peruggia $50,000 to steal the painting.

Now here is the genius of the plan:  Valfierno didn't run any risk of trying to sell the original.  Nor did he have to attempt to smuggle the painting out, all he had to do is stall paying Peruggia until the forgeries had been sold.  Once the six forgeries had changed hands, it wouldn't matter if Peruggia were caught or the original painting were returned, since the swindled buyers couldn't  complain to the authorities without admitting they'd conspired in the theft of the original.

Variations of this brilliant swindle have been used in countless movies and television shows, from Dr. Who to Sherlock Holmes.

The tale of Valfierno, Chaudron, and the six Giacondas first appeared in a Saturday Evening Post story in 1932.  The author, Karl Decker, claimed to have learned of the details from a 1925 interview with Valfierno, who had confessed in exchange for Decker's promise not to publish until after Valfierno’s death.

Ignoring the fact that Decker already had a reputation as a newspaperman who never let the facts get in the way of a good story, there are a few problems with the tale. 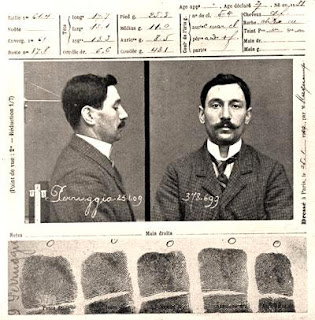 Where are the six forgeries today?  After more than a hundred years, not one has surfaced.  If one of those forgeries could be located today, it would be valuable, probably selling for more than the price Valfierno had received.

A bigger problem for the story is the fact that no forgery of anything by Chaudron has ever surfaced.  This raises the question: How can you be a "famous" forger if none of your forgeries has ever been discovered?  I can’t prove there aren’t forgeries just waiting to be discovered, and no one else can prove there are any.

Nor is there much evidence for the existence of a con man named Valfierno.  While Decker published a photo, no police records exist for a con man by that name.  You might argue that a good con man might never be caught, but if you are never, ever caught, how do you become known as a con man?

No one knows exactly why Vincenzo Peruggia held onto the stolen painting for so long.  He could have returned her and still avoided a prison sentence.  France was so desperate for the return of the painting that enormous rewards were offered—rewards large enough that the poor Italian workman could have lived in comfort for the rest of his life.

We will never know why.  I like to think of Vicenzo coming home from his menial job to his tiny boarding house room, where he locked the door and carefully removed the painting from its hiding place in the false bottom of the trunk each night.  I can picture him as he hung the painting on a wall, moved a chair so that he could sit in front of the masterpiece, and in solitude, admire the woman with the enigmatic smile.

Over time, I think Vicenzo Peruggia became a strange reverse victim of the Stockholm Syndrome.  He couldn’t accept one of the proffered rewards for the return of the painting for a simple reason:  He had fallen in love with her.
Posted by Mark Milliorn at 12:01 AM