A New Pole for Flag Day

The hole was only about a foot deep when the two old ranchers stopped for what Mike referred to as a “Hydration Break.”

After both of the two old cowboys had retrieved a can of Mexican beer from the cooler resting in the bed of the old Ford pickup, Kent said, “Why don’t you just call it a beer break?”

“The kidney doc told me if’n I didn’t want any more stones, I had to stay hydrated,” replied Mike as he liberally sprinkled salt around the top rim of the beer.

Reaching for the salt shaker, Kent asked, “Are you sure hydration meant beer?  And what would your cardiologist say about that salt?”

“I’m smart enough not to ask doctors fool questions I don’t want to hear the answers to.  And salt is an honorary vegetable.”

The two old cowboys went back to trying to dig a hole big enough for the new flagpole.  The work was hindered by the thick gravel and rock that made up most of Chesnut Mountain, where the ranch was located.  The work with the posthole digger was frequently interrupted by the use of a heavy steel pry bar to bust up the rocks.

“Tell me again why we need a four-foot hole in the middle of nowhere?” complained Kent.

“The new flagpole is thirty-three foot tall, and as a rule of thumb, the base should be ten percent of the pole, plus another foot for the lighting rod.”

“The lighting rod is a good touch—we don’t need any more livestock killed by lightning.  What was wrong with the old pole?”

“It was only twenty foot tall made from an old sucker rod off the windmill, and could only handle a small flag.  Put anything larger than about 3 foot flag on it and the wind would start to bend the pole.”

“How big a flag are you going to hang on this thing?”

Mike was lying on his stomach, using an old coffee can to scoop out the dirt from the bottom of the hole.  As the hole deepened, he was trying to widen the hole at the bottom, giving it a bell shape in order to provide a little stability.  Turning his head to look at Kent, the old cowboy answered, “It’s got to be big enough to handle a flag 5 feet tall and 9 foot long.”

“That’s the size of the flag the Army gave me in February of ’59,” Mike answered.  “They used it to cover my grandfather’s coffin.  If you want to see it, it’s on the front seat of the truck.  I’m not going to use it every day, but I figure once or twice a year it would be nice to raise it up.  On Veteran’s Day and maybe his birthday.”

Kent walked over to the old Ford and looked through the window.  Even folded up, the cotton flag was huge: the triangle was about two feet on the longest side.

“The stars look weird,” Kent said.  “I can’t say why, but it looks different.” 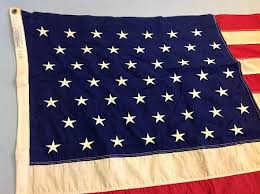 “They are different.  That flag has only 49 stars, in seven rows of seven.  It was made during the seven months after Alaska became a state and before we added Hawaii.  In 1958, the flag had six rows of eight stars; by the end of 1959, the flag had 50 stars and looks like it does today.”

“How do you know so much about flags?”

“Well, I could tell you than I’m just naturally smart, but the truth is, when I found this flag in the bottom of the cedar trunk, I unfolded it and noticed the difference.  I looked it up on the internet and found out that flags like this are kind of semi-antiques.  Learned more about flags in five minutes than I probably need for the rest of my life.”

“Well, I learned that the present flag was designed by a kid for a school project.  HIs teacher only gave him a ‘B-‘ for his project, but Eisenhower liked it and signed an executive order adopting it.  The flag has been the same ever since.”

“What are they going to do if Puerto Rico becomes a state?  Or if those fool granola bars in California get their wish and cut the state in half?  What would a 51-star flag look like?”

Slowly standing back up (using the shovel as a crutch), Mike said, “I suppose it would look a little like the flag we have now, but instead of five rows of six stars and four rows of five, they would use three rows of nine and three rows of eight.”

"The flag that Armstrong left on the moon was bought at a Sears store for $5.50," said Mike as he brushed the dirt from his pants.  "Course, its been exposed to sun and radiation so long now, it's probably bleached white."

"That's great," said Kent sarcastically.  "A zillion years from now, lunar archaeologists will think the first moon landing was done by the French."

By now, the hole was finally deep enough and the two cowboys carefully lowered the three-foot  ground sleeve—complete with a one-foot iron lightning rod on the bottom—into the hole.  The sleeve was a galvanized metal tube which would hold the long aluminum flag pole.  After carefully using a level to be sure the ground sleeve was as close to perfectly vertical as the two old cowboys could make it, they began carefully cutting open the bags of Quikrete and pouring the mix down into the hole.

It had taken two trips of the aging Ford pickup to bring the 15 bags of Quikrete to the site, where they now rested under a faded tarp.  One by one, the 80 pound bags were slowly poured into the hole, tamped into place with the wrecking bar, and then doused with water and stirred with a shovel.  Here the rule of thumb was a gallon of water for every bag of Quikrete.  Since the largest containers available were two five gallon jerry cans, it two trips in the truck to bring enough water to finally mix the required concrete.

When the hole was almost filled, a second tube, a cardboard construction form was sunk into the concrete around the top of the ground sleeve.  This tube was twice as wide, but only about a foot long and when filled with concrete, would form the visible base of the flagpole.  As the two old cowboys finished off the top of the concrete with a trowel, they also finished off the last of the Mexican beer.

“So you bought this new aluminum flagpole just to fly your grandfather’s flag a couple of days a year?” asked Kent as the opened the top of his Tecate.

“Partly.  The rest of the year, it will fly a regular flag with 50 stars.  And partly I bought it as an anniversary present for Barbara.”

“Oh, you’re a romantic devil,” said Kent as he began loading the tools back into the bed of the truck.  “As young as she is, and as old as you are—“

“We are—you’re the same age as me,” Mike interrupted.

“As old as you are,” Kent continued.  “After you’re gone, she’s likely to refer to this thing as Mike’s Last Erection.”

Checking the cooler unsuccessfully for one last beer, Kent asked, “What are you going to do with the old 20 foot flagpole?”

“Oh, I’m going to put it up out at the road next to the mailbox.  I’ve got a special use for it.  If you want to see it, it’s laying over there under the oak tree.  I’ve already got it ready to use.”

Kent raised and latched the old Ford’s tailgate and walked over to the oak tree.  Lying under the tree was the freshly repainted long steel pole, but now sporting an ordinary mailbox welded to the top end of it.  Curious, Kent went over to examine it, bending over to read a neatly printed legend on the side of the mailbox.