It is time to resurrect a political theory of half a century ago:  The American voter elects a president to an eight year term.  Barring unusual events—such as a major depression or a third party candidate—an incumbent president has an insurmountable electoral advantage.

The theory was popular in the decades immediately after World War II, since it had been more than half a century since a sitting president had been defeated in a “normal” election cycle, and it helped explain why Franklin Roosevelt had been elected to an unprecedented four terms.

That a sitting president might aspire to more than two terms—a precedent set by George Washington—had been discussed as early as constitutional convention of 1787, but agreement to a term limit could not be reached as some delegates—such as Alexander Hamilton—wanted a lifetime appointment for president.   Jefferson was not present at the convention, but wrote in a letter, "If some period be not fixed, either by the Constitution or by practice, to the services of the First Magistrate, his office, though nominally elective, will in fact be for life; and that will soon degenerate into an inheritance." 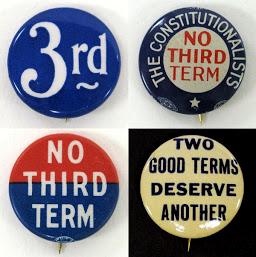 Franklin Roosevelt was not the first president to consider a third term.  Ulysses Grant, Theodore Roosevelt, and Woodrow Wilson all seriously toyed with the idea of a third term, and each met angry public opposition to a third term.

Following the death of Franklin Roosevelt, the Twenty-Second Amendment, limiting reelection to two terms, was introduced in 1947 and ratified in 1951.  It allowed a vice-president to assume the presidency for less than two years and still run for two full terms.  Lyndon Johnson, for example served out the last fourteen month’s of John F. Kennedy’s term, was reelected in 1964, and could have legally run for a third term in 1968 had he wanted.

The presidential reelection advantage comes from the four years that a sitting president has to assume the mantle and dignity of the office of president.  After four years, he is not assumed to be capable of being presidential—he is the president.  While a recent poll showed that over 40% of Americans could not correctly name the last three presidents (and 29% cannot identify the current vice-president) almost all could correctly identify the same men as presidents if given a name.  Similar polls from a decade ago revealed that while nearly everyone can identify the current president if prompted with a name, as many as one in five cannot come up with the name of the current president.

Clearly, name recognition is vitally important even in a presidential election.  (Surely, that last poll if done again today would show that everyone knows who the current president is.  I really want to believe that, but I wouldn’t bet money on it.)

Let’s look at the presidents who unsuccessfully sought presidential reelection.  Stretching back over two hundred years, there are roughly a dozen, depending on how serious you think a few of them were in their failed attempt to retain the presidency.

John Adams (1797-1801) desired a second term, but his constant feuding with Alexander Hamilton (and damn near everyone else) so divided the Federalist Party that the election of 1800 not only saw the rise of Jefferson’s Democratic Party, but the death of Adams' Federalist Party.  While he was the first president to be denied reelection, he deserves most of the blame for his failure at the polls.

A generation later, his son, John Quincy Adams (1825-29) became the second sitting president to be denied a second term.  John Quincy Adams, had been selected president by Congress after a four-way contentious election meant that no candidate received either a majority of the popular vote or of the votes of the Electoral College.  John Quincy refused to participate in party politics, had signed an idiotic tariff bill, and was known to be violently anti-slavery.  The tariffs cost him votes in the North, while his position on slavery doomed his chances in the South. And since John Quincy was running against Andrew Jackson, who was the most popular military leader since George Washington, his loss was a forgone conclusion.

Note.  John Quincy Adams, like his father, didn’t get along with anyone.  When the entire country had a single female professional journalist, Anne Royall, Adams refused to give her an interview.  Knowing that Adams swam au natural in the Potomac River, Royall ventured to the river, gathered his clothes and sat on them until he agreed to an interview, thus becoming the first female journalist to interview a sitting president.

John Tyler (1841-1845) also desired a second term, but the issue of slavery—exacerbated by his push to annex Texas—divided his own party, which refused to nominate him.  The heated debates over slavery and the deep division in the country were the chief reasons that James Polk (1845-1849), Millard Fillmore (1850-1853), and James Buchanan (1857-1881) did not seriously seek reelection.

Franklin Pierce (1853-1857) never contemplated a second term, and probably came to regret having run for the office before he was even sworn in.  Shortly before his inauguration, President-elect Polk, his wife, and son were traveling by train to New York when their car derailed.   Both parents were slightly injured, but their son Benjamin was killed.  Jane Polk, had already lost two children and now childless, believed that God had taken her last child as punishment for her husband’s hubris in seeking the presidency.  The four years of the administration can best be described as an extended wake, with both Polks eager to leave Washington.

Andrew Johnson (1865-1869) was an extremely unpopular president.  Almost impeached, he was a Democrat Vice-President who became president upon the assassination of the Republican Abraham Lincoln.  With most of the support for the Democrat Party coming from the South, where it was denied political participation during Reconstruction, Johnson was a president with no political support.  While Johnson had no love for Washington, he sought the nomination from the Democrat Party as a “vindication such as no man had ever received.”  When the party met, they lavished public praise on Johnson but never seriously considered giving him the nomination.

Chester A. Arthur (1881-1885) never really wanted to be president, nor did he spend much time at the job when he inherited it.  Perfectly suited to the ceremonial job of vice president, when he became president after the assassination of Garfield, Arthur promptly did…almost nothing.  No one, including Arthur, seriously considered giving him a second term.  His successor, Rutherford B. Hayes (1877-1881) remained loyal to his campaign pledge of serving only one term, then eagerly returned to Ohio. 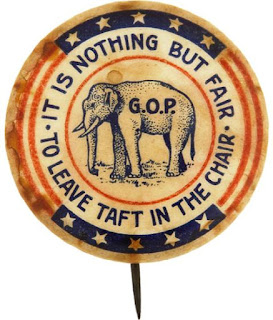 William Howard Taft (1909-1913) did not really want to become president—he wanted a seat on the Supreme Court, instead.  Still, when selected to be the Republican candidate for president following the popular Theodore Roosevelt, he ran a successful campaign.  When Roosevelt decided to run against Taft in 1912, Taft was deeply insulted and refused to step aside for his friend, the former president.  Since it is almost impossible to deny a sitting president his party’s nomination, Roosevelt eventually ran as a third party-candidate, effectively dividing the Republican vote, thereby guaranteeing a victory for  the Democrat candidate, Woodrow Wilson, who received 43% of the popular vote.  Finally, in 1923, President Harding gave Taft the job he had wanted all along, appointing him the Chief Justice of the Supreme Court.  In 1925, Taft said, “The truth is that in my present life I don’t remember that I was ever president.” (Nor did the rest of the nation.)

Herbert Hoover (1929-1933) sought a second term, but the looming Great Depression destroyed his chances at reelection.  Similarly, Gerald Ford (1974-1977) campaigned for a second term but the Republican Party was tainted by the scandal of the Nixon resignation.  Ford was defeated by James Carter (1977-1981) whose reelection was scuttled by inflation, economic stagnation, and the Iran Hostage Crisis.  To be fair to both Ford and Carter, perhaps political stability was impossible for either party after the loss of national political trust following Watergate.

George Herbert Walker Bush (1989-1993) ran for reelection, but he (like Taft) faced a third party candidate who split the Republican vote.  Ross Perot won 19% of the popular vote, guaranteeing a victory for William Clinton, who received a mere 43% of the popular vote.  This was worse than the 45.6% Dukakis had garnered in 1988, and similar to the percentage of votes received by Walter Mondale in 1984; both Mondale and Dukakis lost despite getting more votes than Bill Clinton won with.

Which brings us—inevitably—to consider the 2020 reelection chances of Donald Trump.  While campaigning in 2016, candidate Trump stated, “I can be presidential, but if I was presidential I would only have—about 20 per cent of you would be here because it would be boring as hell, I will say.”

In 2017, after becoming president, Trump said, “I can be more presidential than all U.S. presidents, except Lincoln.”

Despite these claims, the presidency of Donald Trump has been, at best, unique.  As a non-traditional presidential candidate, Trump rarely has a filter on what he says.  Supporters say this makes him the most transparent politician in memory, while his detractors dismiss him as a clown.  How does this affect the built-in advantage an incumbent faces in an election?

In just 31 months, there will be another presidential election and Trump has already indicated that he is running again.  Will the presidential mantle of dignity transfer to his name and will the usual advantage of being a sitting president work for Donald Trump?

Would you bet money on that?
Posted by Mark Milliorn at 12:01 AM