Everyone is mad at Facebook.  Somehow, a behemoth technical service that allowed you to use their product without charge in exchange for the right to sell your data became Public Enemy No. 1 when people finally realized that their data had, as promised, actually been sold.  And sold.   And sold.

All the clues were there and had been for ages.  If you go online and browse a riding lawnmower at Sears, you are guaranteed to see the same lawnmower on Facebook within 24 hours.  If you are reading this blog online, look at the ads just to the right of these words.  Do the products shown look familiar?  Who do you think pays for the beer I drink while I write this?

To use a phrase that has been endlessly repeated this week, if you don’t pay for the product, you are the product.  Facebook sold our data to Cambridge Analytics, who in turn sold the data to the Republican Party for use in the last election cycle.  Four years earlier, the Democrats had used your data to help elect President Obama.  And without a doubt, your data is still being sold and resold endlessly.

Note.  I have always known this, which is why I never fill out online forms accurately.  Or even the same way twice.  It is impossible to keep your data private, but you can keep your data so confused and garbled as to be useless.  If you are one of the more than fifty people this week who congratulated me on my birthday, thank you.  But, I confess, I didn’t really have a birthday this week.  At least one of the credit reporting agencies believes I am employed by Colonel Sanders as a chicken plucker.

This type of data has been used to manipulate messages in presidential campaigns for longer than you might suspect.  The first such successful use of computerized data to formulate arguments during a presidential election was the 1960 campaign of John F. Kennedy.

This is not the same as campaign polls, which can accurately tell a pollster which brand of peanut butter you might prefer, but could never reveal why you chose as you did.  More important, this was a new form of computer modeling that could predict how voters would respond to issues before those issues were raised.  In essence, it could tell what would it take to influence the buyer to pick a new brand of peanut butter.  This kind of analysis required the use of computers—large, expensive mainframe computers.

Kennedy hired the Simulmatics Corporation to do just that type of work on his campaign.  Among the recommendations their research gave his campaign was the strategy to vigorously counterattack the religious bigots who were criticizing Kennedy’s Catholicism.  While Democratic Party leaders wanted to ignore the issue for fear of exacerbating the situation and possibly alienating more voters, Simulmatics’ research showed that all of the damage had already been done, and Kennedy would probably not lose more votes if he directly challenged the issue.  Similarly, Simulmatics showed that if Kennedy supported the Civil Rights movement,  it was not likely to cost him any additional votes in the South, but would attract more Black voters.

It is impossible to prove that Kennedy won the election because of this new computerized data analysis, but I can point out that by the 1964 election, both parties were engaged in this form of voter and issue research. 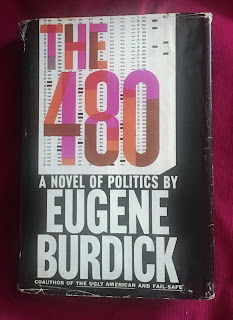 All of this is painstakingly spelled out in a great novel from fifty-four years ago, The 480, by Eugene Burdick.  I might as well warn you right now, that even though this book is well written, extremely relevant in today’s political climate, and still technically accurate in showing the ways that voters can be manipulated during elections—you’re going to have a tough time finding a copy.  Despite being a classic, it is not available on Kindle, and even an aging paperback copy is fetching more than $20 a copy.  None of the libraries I checked had a copy.

The books of Eugene Burdick used to be well-known:  he co-authored Fail-Safe with Harvey Wheeler and The Ugly American with William Lederer.  (Yes, both books were made into famous movies and, no, neither movie was half as good as the book.)  The Ugly American has sold millions and millions of copies, has never been out of print, and was probably responsible for the creation of the Peace Corps.  If you have a college degree and haven’t read it, you should probably sue your alma mater for a tuition refund.  (As an aside, our current use of the term, "ugly American", is exactly the opposite of Burdick and Lederer's use in their book:  their ugly American was a hero—and they coined the term—while our use of this now-common term refers to a boor.)

Written in 1964 during the nightmare days just following the assassination of John F. Kennedy, The 480 deals with how computers had been used in 1960 and could be used to sway the vote in the upcoming election.  The title of the book refers to the 480 categories of voters that Simulmatics actually used to model American voters.  The categories represented—in order of importance—socioeconomic status, geographical region, education, race, and party affiliation.

To put the whole process in the simplest of terms, once the computers had established what you were, they could accurately predict how your group would vote on proposed topics.  Though the white upper-middle class urban Democrat voters of Kansas City had never been asked by a pollster their position on whether America should remain in the United Nations, Simulmatics could accurately predict how the topic—if raised by a politician—would motivate voters in the upcoming election.

A running theme in the book is the likelihood of presidential reelection.  In the 1960’s, only two presidents seeking reelection in the 20th century had failed.  Taft lost because Teddy Roosevelt ran against him and split the Republican vote, thus handing the election to Wilson, while Hoover's reelection bid fell victim to the start of the Great Depression.  Burdick and many political scientists believed that a sitting president was almost guaranteed reelection, unless certain conditions were met.  When I reread the book this week, I could not refrain from listing those conditions and look for them in Obama’s reelection in 2012 and in Trump’s impending reelection attempt in 2020.  If you read the book, you will undoubtedly find yourself doing the same.

To be fair, some of the book is a little dated, though most of  it has stood up to the test of time very well.  The descriptions of IBM mainframes of the early sixties are done with a little awe and reverence, and the IBM 5081 punchcard pictured on the book’s dust jacket is almost a distinct character in the book.  Today, the computer I am using to write this is several thousand times more powerful than that antique mainframe, and I doubt that my children would know what a punchcard was used for.  (I have several hundred old blank cards boxed up in the garage—I wonder if I can sell them individually on eBay?)

The original modeling for the Kennedy campaign by Simulmatics used 133,000 people and took ten years to create.  Today, Facebook has admitted that the data of at least 90 million Americans was “scraped” by corporations that update their models in real time.  Google won’t comment on how it sells its customer data, though it obviously does.  Apple says the data it sells is anonymous—meaning your name is omitted—but Apple can’t prove it.

Most of us are probably telling ourselves that this is someone else's problem and it doesn’t really affect me.  But, if you are reading this online, look at the ad just to the right of this text.
Posted by Mark Milliorn at 12:01 AM