When I am cooking, the words The Doc fears most are, “Dinner tonight is a little on the spicy side, but don’t worry, it’s not that hot.”

This is her cue to arm herself with her weapons of choice:  sour cream, a carton of half, cheese, ranch dressing, half and half, and a jar of tamarind chutney.  She believes their liberal use will somehow help mitigate the effects of red peppers.  I understand this, since as a child I believed that if you had too much salt on your food, you could negate it somehow with black pepper.  Since I could just barely taste black pepper, I thought it was used like an eraser on a pencil, to correct a salt mistake.

People occasionally say that my sense of taste has been dulled by the overuse of Texas Ketchup (Tabasco) and similar seasonings.  I prefer to believe that my taste buds have evolved to a higher plane.

Still, I will admit that even I once had a problem with some hot peppers (but only once!).

Years ago, while I was in grad school, I worked at a living history museum in my spare time.   The place was huge, comprised of hundreds of acres on which were dozens of buildings, more or less typical of life in New Mexico roughly about the year 1700 (although a few of the buildings were devoted to showing life in the late territorial period—say, about 1880).   Most of the buildings were real, although several had been moved onsite.  A few structures were actually movie sets, since the idyllic setting was frequently used in movies.  (If you carefully watch one particular famous western, you can see the toes of my cowboy boots in one scene.  If you have very good eyes, you will learn that at least one cowboy in the film had rubber-soled boots.) 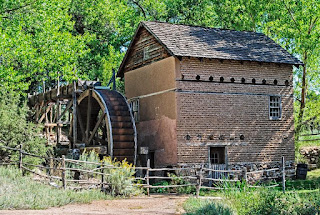 There were two mills on the property, both powered by water.  The larger of the two, had a 20-foot tall overshot waterwheel and was gorgeous.  It dated back to the late nineteenth century and was one of six such large flour mills that had once provided the U.S. Government with enough flour to feed the Navaho.  The government had discovered—much to its consternation—that when people were forcibly moved to infertile land, they had to be fed.  Simultaneously, several industrious merchants learned that it was possible to buy a mill—in kit form—and make quite a profit selling flour to the Army.

This large mill could make over five tons of flour a day, but while the mill was still completely operational, the museum never did run it at capacity.  The old wood and adobe mill could not possibly pass a modern-day health inspection, so we ran the mill at the slowest possible speed and during a day-long demonstration produced 75 pounds of beautiful flour that we were forced to throw away.  (And I did toss it, but first I took it home and ran it through my family’s digestive systems.)

The large complex mill was a wonder to look at and a joy to work in—with all those gears, pulleys, and long leather belts powering the machinery.  It was a marvel what could be done with massive water power.  There was another mill on the property that people hardly ever noticed—a small adobe hut built over an acequía ditch, with a three foot horizontal wheel.  This was one of the last remaining operational examples of the corn mills that Spanish colonists had built using only local materials. 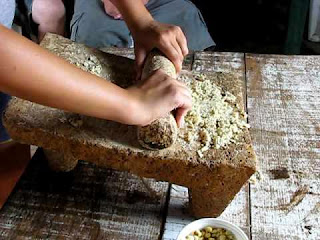 The genius of those small mills—technically gristmills—was their simple design, their home-made parts, and their use of small streams of water.  Despite their simplicity, each was capable of grinding 300 pounds of cornmeal a day.  Without a mill, colonial women had to spend a large part of every day in the back-breaking labor of using a mano and metate (pictured at left) to grind enough corn to make the daily tortillas for a family.  The historical records indicate that such mills were scattered across colonial New Mexico and were probably used communally.

What the records did not show was exactly how such a mill operated.  Since there were no owner's manuals, and no one alive had ever seen one working, restoring the old mill was a lot of trial and error—mostly error.  The ruins of several mills were examined and the remaining debris studied and compared, tested, discarded and tried again.  More than once it was discovered that what had been thought to be a discarded stick or rotting length of leather turned out to be a part crucial to the mill's operation.

Finally, one day, it all worked and after finely adjusting the gaps between the two limestone grinding wheels, we were producing fresh cornmeal.  Have you ever smelled freshly ground cornmeal?  It immediately makes you long for your grandmother's cornbread, fresh out of a warm cast-iron skillet!

Years ago in Mexico, I discovered the incredible taste of fresh-caught trout.  As fast as the fish were caught, they were cleaned, fried, and eaten and then the process was started all over again.  No other fish in my life has tasted half as good as those trout.  I was happy to discover that fresh ground cornmeal produced pretty much the same effect when quickly made into cornbread. 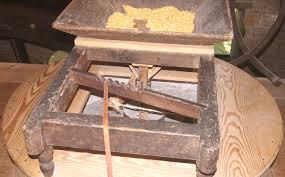 Naturally, since the old mill was constructed of ancient leather, wood, and adobe, it would never pass a health inspection, either, and we were required to throw the cornmeal away.  Every employee of the museum helped in this task, at a rate of about five pounds at a time.

Both mills were operational for only a few days a year, during fairs and history days, to carefully demonstrate how people had lived decades in the past.  During one of those days, an elderly woman told us that her grandfather had worked in one of the corn mills back in the 1880’s.  She told us that, besides grinding corn, her father had occasionally ground chile peppers.

This was the first confirmation of something we had already suspected.  In among the abundant  small pieces of wood in the ruins of some of the old mills we had examined, some were faintly stained a dark crimson from chiles.  We knew that at the end of the 19th century, chile ristras had been used as a medium of exchange at trading posts in parts of New Mexico that were so remote that a barter economy was still common as late as the start of the Second World War.  It made sense that the store owner would take those bundles of large chile peppers and have them ground up into chile powder to make the goods easier to transport.

Three of us worked in those mills, and as soon as we heard that woman’s story about her grandfather, we all had to try making fresh chile powder.  Getting hold of 200 pounds of dried red chile was not exactly hard in New Mexico, as chile is still a major agricultural crop.  We put a couple of pieces of plywood across some sawhorses, and started hacking up the dried chiles into rough pieces so we could feed the chunks into the wooden hopper that normally held the dried corn.

Note.  The country in South America is Chile, the pepper plant grown in New Mexico is chile, the powdered form of this pepper is chile powder, and if you add other spices such as salt, garlic powder and onion powder, it is chili powder.  The latter is used to make a meat dish originating in Texas called chili con carne.  If that dish is made up North by damn Yankees who add everything from lima beans to macaroni, it is called crap.

it took a couple of minutes to find the right adjustment of the grinding stones to produce true chile powder, but in about half an hour, we were producing large quantities of finely ground and wonderfully aromatic chile powder.  We inhaled deeply, the smell was even more pleasing than freshly ground corn meal.  We just stood there admiring the accumulating spice and discussing what we were going to cook with fresh chile powder…

And then we began to cough.  And wheeze.  And had tears running down our faces.  Our eyes burned and our throats were on fire.  Our lips hurt. And the tips of our fingers hurt.  EVERYTHING BURNED AND HURT!

We ran out of that mill, sprinting to the nearest building where we fought over a water hose that was simultaneously desperately needed and absolutely inadequate to the task at hand.  A swimming pool of fresh, cold milk couldn’t have quenched that fire.  Every pore on our skin, everywhere, had somehow absorbed that chile powder and was vigorously objecting to the process.  We had inadvertently produced a military grade biological weapon of mass destruction.  To this day, I wonder why Mexico is not considered a military superpower!

The worst part was that the mill was still running. We still had about 150 pounds of chile to grind up, and since the large hopper was full, it was going to continue the process until the irrigation ditch dried up or the hopper ran out.  We just stood there about 50 feet away, watching a small pink cloud of deadly dust drift out of the mill’s door.

There was a brief discussion where we considered calling the authorities and having the old mill declared a superfund site, but eventually we began scouring the various museum buildings in search of protective clothing.  Finally, we gathered together enough coveralls, gloves, rain coats, scarves, motorcycle helmets, swim goggles and other assorted gear that we looked like a crew of deranged "Michelin Men".  Picture in your mind what you would wear if you kept a hive of killer bees in Antarctica, and that was about how we were dressed: primitive hazmat suits!

With a little painful trial and error, we discovered that if we held our breath, we could work in that tiny adobe mill for about thirty-seconds at a time.  We eventually, ground up about 30 pounds of chile powder, releasing an estimated additional 20 pounds into the air.

Given the prevailing winds and the location of that mill, we estimated that most of the noxious cloud eventually blew into the Trinity nuclear testing site, where it should feel right at home with the slowly decaying plutonium.  That’s probably the real reason for all the fences and guards there.
Posted by Mark Milliorn at 12:01 AM