The Brazos River Boys were sitting in the corner of the local cantina, playing their favorite game—watching the various patrons.  Over a couple of cold Mexican beers, they had ignored the young men playing pool and the grizzled old regulars who could be found hunched over the bar in any booze joint in the world, who had been quietly nursing drinks from the moment the bar had opened until closing time.  What caught the attention of the two old cowboys was a group of men sitting at a table in the middle of the bar, loudly discussing the recent Palo Pinto County Rodeo.

Pointing at the table, where a man was standing and waving his arms, and smiling as he talked, Mike said, “Looks like Jack is wound up about something.”

“Yeah, once he gets going, Old Jack can talk the ears off a wooden Indian,” agreed Kent.  Let’s go over and see what he’s got to say today.”

As the two old cowboys moved over to the next table and sat in a pair of empty chairs, Jack kept on with his story.

“…was a pretty good rodeo all around—the Livestock Association puts on a great show.  I really liked this year's clowns; those boys do a job I wouldn’t touch for love nor money.  I liked the bull riders the best, but the boys today aren't near as good as they were back in my day—“

“Who was the best bull rider you ever saw?” interrupted Mike.  Having learned a long time ago that Jack told his best yarns when challenged, Mike had decided to test the man’s creativity and see what he came up with. 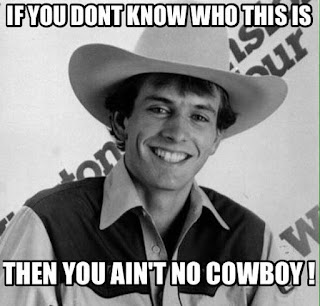 “Well, that’s a good question.  I saw Freckles Brown in his prime, and he was damn good.  And in ’82 I watched Lane Frost win in Fort Worth—I think he could've been the best there ever was—if that bull hadn’t killed him in Cheyenne.  But, my favorite all-around bull rider never even competed in a rodeo.”

“How’d ya know he was any good if he never competed?” urged Kent.  Like his friend, Kent knew that Jack needed a little periodic encouragement to spin a really good yarn.

“Well, I’ll tell you,” continued Jack.  “Back in 1979, I was working on offshore oil rigs out of Galveston.  The boats would take you out for a week, then bring you back ashore for a week.  We made more money on those rigs than we could spend ashore, but God knows, we tried.  The biggest bar in the world was Gilley's, about 20 miles up the highway in Pasadena, and they had a mechanical bull—“

“Yeah,” interrupted Mike.  “We saw that damn fool movie, Urban Cowboy.  Because of John Travolta, half the country thought Texans had a New Jersey accent.  That movie was horse shit.”

“I didn’t say nothing about no damn rodeo!  I’m telling you about my favorite bull rider, the best I ever saw.  And this was more than a year before that fool movie come out.  After the movie, Gilley's was crawling with so many Yankees in designer jeans that no oilfield worker could squeeze in the door.  'Sides, that ain’t even the bar I’m talking about.”

Satisfied that he had quieted the hecklers, Jack continued.  “No, Gilley's made the mechanical bull popular, so a place opened up further down the highway on Galveston island.  Called ‘The Country’, it was about half the size of Gilley's, it was closer to where we lived and it was a lot cheaper...And they had the same mechanical bull.” 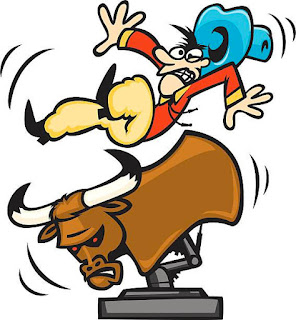 “The guys used to come in, hoping to ride a cowgirl, and when they failed to find a willing partner they'd pay good money to sit on that contraption as it spun, bucked and spun again.  Actually, since that machine could change direction so fast, spin and buck, jerking around, it might have been almost as hard to ride as a real bull.  'Course, instead of hitting the ground, in the bar you landed on soft foam padding, and the bull couldn’t trample you or gore you.  That’s what had killed Lane Frost that day in Cheyenne:  the bull turned and gored him after he had hit the ground.”

At this the men sitting around the table looked at each other and nodded.  An angry bull was just about the most dangerous animal around and a cowboy didn’t have to attempt to ride one for eight seconds to have the beast kill you.  A mechanical bull, by comparison, was a toy.

“Well, guys used to bet who could ride that fool thang the longest, so they had regular contests and some real money changed hands.  Every now and then, some tall, lanky boy with an empty Stetson would challenge the reigning champ—a waitress named Lucy.  (Leastways, that’s what we called her.).  She was Vietnamese and nobody could pronounce her real name, but she told me it meant jade.”

“Now, this was right about the time there were all those fights about the Vietnamese shrimpers moving in, and those city cowboys—all hat and no cattle—they just couldn’t believe that the champ bull rider was a little girl that didn’t know John Wayne from Tom Mix, so they were more than willing to put a little money on the proposition.  About once a week, somebody wearing a belt buckle the size of a hubcap would pony up a couple of hundred bucks and challenge Lucy.”

“Being the defending champ, Lucy always let the challenger go first, and he’d sit atop that bull, get a death grip on the rope and holler ‘Let ‘er Rip!’  As that bull twisted and jerked, the cowboy would wave his hat in air, whooping and shouting until the bull would go one way while he went the other and he’d be jerked clean off it.  If the kid was any good, it usually took about twenty seconds before his butt hit the floor.  Then it was Lucy’s turn.”

“Lucy was no bigger than a minute, a couple of inches shorter than five foot, all of 90 pounds soaking wet, and most of that was in her hips and legs.  While she looked like a frail little girl, Lucy had been trained as a gymnast and had a body hard enough to roller skate on and legs so powerful she could‘ve cracked pecans between her thighs.  She’d get on that mechanical critter, squeezing it tight with her legs, firmly locking the rope in an iron underhanded grip, holding her body as low as possible, and then—when the bull started gyrating-she’d kind of let her upper body go limp.  Hell, her center of gravity was probably lower than the top of the bull.  Every time that bull leaned forward, she’d lean back, never leaning more than a few inches one way or the other to stay centered.”

“Lucy made riding that fool contraption look easy.   And it probably was if you were only 90 pounds of solid muscle.  I never did see her get thrown—she’d just sit on that gyrating critter until she had busted the challenger’s time and then tell the operator to flip the switch on the beast.  She’d collect her winnings and go right back to waiting tables.  I think she only worked there so she could challenge those citified cowboys.  I know for certain she made more money on the bull than she did serving beer.”

“What happened to her?” questioned one of the men sitting at the table.

“Nothing happened to her,” answered Jack.  “When Hurricane Alicia flattened the bar like road-kill, she made a deal with the bar’s owner.  Last I saw of her, she was driving a pickup west into the sunset, over the bridge towards Houston.  The bull was tied securely in the bed of the truck.  For all I know she’s either found another bar, or she’s trying to cross breed the damn thing with a riding lawn mower.”

Finished, Jack picked up his beer, draining what was left, staring at the men sitting around him as if to challenge any of them that dared to doubt his story.

“Yeah,” Mike answered.  “Though this is a first:  A mechanical bullshit story.”
Posted by Mark Milliorn at 12:01 AM