A little over a hundred years ago, Theodore Roosevelt wanted to show the world that America was a new and great naval power by sending the entire U.S. Navy on a round the world voyage to “show the flag”.  Such an expedition was a costly affair, and a frugal Congress strongly disagreed with the waste of taxpayer money, and promptly cut the annual naval budget in half, to prevent just such a voyage.

Undeterred, Teddy promptly sent the fleet off to circle the globe, telling Congress, “I have enough funds to send them halfway around the world.  If you want the fleet back, come up with the other half of the money.”

I’ve always wondered if that was what the President of Enema U had in mind a decade ago when the university requested from the state legislature enough funds to replace the aging and cramped old library building.  The politicians knew that the library still possessed plenty of books that the football team had not yet colored, so they gave the Athletic Department a new electronic scoreboard and a crate of new crayons, and gave the administration roughly half the amount necessary to construct a new library.

Since the university president (like all administrators) suffered with a near-terminal case of Edifice Complex, the university constructed a new hemi-library, about a block away from the old library.  The books were cleverly divided between the two buildings in such a feat of legerdemain that it was always necessary to trudge back and forth between the two buildings to conduct any research.  Naturally, it cost twice as much to run two such buildings instead of a single library, but evidently that was the intent of the design specified by the building committee, since the new library was deliberately constructed in such a way that it was impossible to expand it with future construction.

Who knows, in another decade or two, they may add a third library building.  (It will probably include a basketball court).

This is the way universities usually design new buildings—stupidly.  This process is all but guaranteed by using committees, and since I once had the honor of serving on such a committee, I can tell you exactly how the process works.

First, the university ignores all actual needs and decides to erect a new building.  Since the true purpose of any new building is to enhance the résumé of the university president in order for him to move to a larger university with a more successful football program, the project must be something large and impressive.  A new art building, a new performing arts building, or a new semi-library—these are perfect projects.  Since no one would be impressed with a new classroom building, no matter how desperately needed, such mundane structures are rarely constructed.

It is the stated goal of all universities that as much education as possible should be done online, not actually in a building that requires costly upkeep.  In a future and perfect world, the student will be able to stay home and just send money off to college—a place that will consist of several large multi-story administration buildings.   And a stadium.

After the decision is made to construct a new building, a committee must be appointed to decide on the details.  Most of the members are department heads, faculty members, and assorted administrative toadies—almost none of whom have had any actual experience in construction, design, or engineering, or who will ever actually work in the future building.  At least, that was true of the committee I served on.

The university has whole departments full of engineers, draftsmen, and people with real construction experience—almost none of whom will ever be asked to serve on such a committee.  My committee had two students, a nurse, and several people who didn’t know the difference between concrete and steer manure, and they were the people who monopolized the meetings.

Our first task was to select an architect from the numerous applicants, each of whom had submitted impressive stacks of photographs and drawings of similar buildings that had been built at a rival university.  On several occasions, the committee members actually traveled to other universities and inspected the sample buildings.  All of this was a waste of time, since the architect selected is almost invariably from a firm doing business as far from the local university as possible.  (Remember, the definition of a consultant is someone with an advanced degree who lives out of town.)

Now the newly selected architect will spend hours and hours with the committee, making lists of the required features.  Most of the suggestions will be idiotic or contradictory, and the architect will promise to include them all.  Of course, the new building will be “green” and energy efficient.  Of course, the new building will blend in with the campus, be beautiful, and attractive…  And so forth.  In the end, the actual building will be a stuccoed concrete horror with tiny windows that don’t open, closely resembling a bus station or a prison, and surrounded by landscaping selected by morons who have never lived in New Mexico.

Take that new demi-library building:  for some reason the architect decided that a new building erected in the middle of the Chihuahuan Desert should be surrounded by palm trees.  Evidently, he thought all that local sand was a beach.  To be fair, I will grudgingly admit that a building surrounded by tumbleweeds might not look attractive on the photos shown by our recent president at his next university.

The new building that my committee was tasked with designing was actually remodeling and combining two existing buildings and adding a few desperately needed classrooms.  The committee met for weeks and heard ideas of what the new classrooms should look like.  Most of the talking was done by people who had no recent experience in teaching—a universal requirement for administrators.  These same administrators were never going to teach in the new building, either.

The traditional design of large classrooms is fairly simple:  long rectangular spaces with the floor sloping downward to the front of the room, where raised platforms holds a lectern and the walls hold blackboards.  The rooms contain either desks or tables at which the students can sit and take notes.  Lately, modernized classrooms contain computerized projectors, white boards, and large screens, but the basic design has not really changed since  the days of Socrates.

President Garfield once defined the ideal college as a log with Mark Hopkins (his mentor) on one end and a student on the other end.  I wish to hell Garfield had been on my committee. 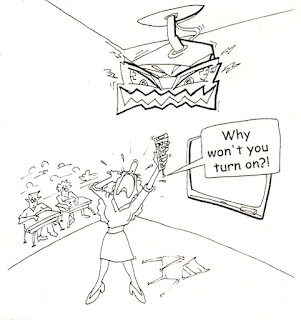 No, it turned out that both President Garfield and I were wrong.  Over and over again, experts told the committee that the “Sage on the Stage was dead.”  Lecturing was out and education now was cooperative learning in a reciprocal environment that would lend itself to group work.  The floor would be flat (no raised stage), the desks would be on wheels for ease of rearrangement into different groupings, and “every wall would be a learning wall.”

“Imagine,” I said, “that you are a history professor with one hour to explain the Protestant Reformation to eighty freshmen who took high school history from a football coach who thought the Renaissance was a casino in Vegas.  How the hell do you do that in a room where every other desk is facing the wrong way while students are staring at a learning wall, waiting for a movie to start?”

I never did get an answer.

None of this deterred my committee and we rarely agreed on anything.  It was at this point that the goals and aims of the committee began falling apart like a leper on a pogo stick.  It turned out that only one voice mattered—the dean.  She appointed enough new committee members from her staff she got what she wanted—including a machine that would generate the smell of fresh baked bread.  The building wouldn’t get the actual bread, just the smell.

We were tasked with designing a horse and in due course provided a blue print for a two-headed camel.  The design was to connect the existing two buildings with lots of open interactive spaces where professors could mentor students after class, with study corners, and with new offices for administration where there had once been several serviceable, if old, classrooms.  The resulting new building would have been a nightmare to construct, would have been as ugly as a mud fence, and would have been about half as useful as the two original buildings had been.  Frankly, the state could have saved a ton of money by simply updating the existing two buildings, but that was never even contemplated.

So, after a year of hard work, the committee was thanked for its work, was congratulated for the finished product, and was dismissed.  The state had appropriated a set sum of money to remodel two existing buildings and add more classrooms, and my committee had done—mostly—its job.

Then the administration threw away the plans, bulldozed down both buildings and erected a new one with fewer classrooms capable of seating fewer students.

Typical.
Posted by Mark Milliorn at 12:01 AM