There is something weirdly compelling about the obsolete and rare objects from a bygone era, and for a military historian, this means a fascination with the rare and somewhat weird weapons of the past.

There are weapons that seemingly last forever: the Colt 1911 .45 automatic was used in World War I, and has showed up in just about every war since.  The Browning M2 machine gun has been old enough to qualify for Social Security for a couple of decades now, and is still used by armies around the world, including ours.  Barring the invention of a futuristic ray gun, these weapons will probably still be in use a century from now.

There are other weapons that simply vanished with time, to be lost, forgotten, and never heard from again.  Here are four of them. 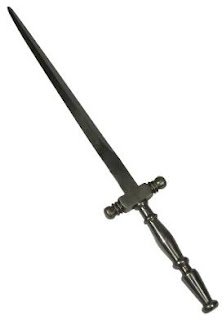 The misericorde was a long thin dagger used in European feudal combat during the 14th and 15th centuries.  This was not a primary defensive weapon, but (as the name implies), a tool to be used to “give mercy” to a wounded knight.  In an age when combat was done almost exclusively with edged weapons, even a knight in full armor could be so wounded that a medical recovery was all but impossible.

A good example is the Battle of Crécy in 1346.  At the end of the battle, there were thousands of wounded knights who had fallen to the superiority of the English longbow.  As the English archers scoured the battlefield looking for French knights worthy of being taken prisoner against a future ransom, those too severely wounded were dispatched by these long daggers being thrust through the vision slits of helmets or through the gap in armor at the underarm, mercifully killing the helpless.

Technically, this was a violation of the chivalric codes of warfare, since unwashed common peasants killing noble knights was not allowed.  (This ignores the fact that those same peasants had been killing the knights throughout the battle with anonymous arrows.)  Since rules are usually written by the victors, no one paid much attention to the violations of a code that was dying faster than the French knights.

Some of the misericorde were shaped like an icepick, with long thin cylindrical blades, sometime called a rondel.  Regardless of the shape, their only use was to provide a coup de grâce to armored knights.

How common the practice of actually using the misericorde was in combat is unknown, since no one was keeping records, but a recent post-mortem on the remains of King Richard III indicates that such a dagger gave him a fatal head wound at the Battle of Bosworth.  A short time  later, gunpowder weapons made armor futile, and the need for a long flexible-bladed dagger.

The atlatl once was extremely commonly used, though it’s hard to find anyone still using it today.  Independently developed all over the world, it was probably in wide use from 30,000 years ago up until 500 years ago, and is still used by a few Australian bushmen.  Essentially a short stick with a bowl or hook at the end in which the shaft of a spear fits—effectively lengthening the throwing arm—it allows the missile to travel farther and faster than a traditional spear.  How fast and how far?  The current record is 858 feet traveling at close to 90 mph. 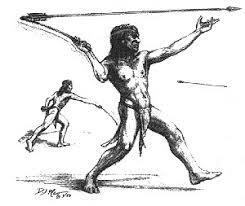 This stone age Kalashnikov gave early man a frightening hunting weapon, which explains how wooly mammoths were hunted to extinction.  I would love to tell you that an adventurous historian has field tested this experiment by bringing down a modern elephant, but, unfortunately, I can’t.  I can think of a few desk bound historians who I wish would try it, and I’m certain that a researcher could receive a grant for it.  (You can get a government grant to study where your lap goes when you stand up.)

No, today’s historians are too gentle and too tame to actually kill an elephant with an atlatl, so a researcher used an atlatl on a deceased elephant and judged whether the wound inflicted would have been fatal.  It would have been.

It is ironic that the word ‘atlatl’ is from the Aztecs, who were one of the last peoples to use the weapon in combat.  The Spanish were sorely tested by the Aztec warriors using the weapon, since the both the range and the rate of fire of the projectiles—called darts—were far superior to the primitive harquebuses the Spanish carried.  When Montezuma gave an atlatl to Cortez, he was mystified when the Spaniard was less interested in this formidable war weapon than he was in the worthless, soft yellow metal the Aztecs called “the excrement of the Gods.”

The atlatl is rare today, but may be making a comeback.  Recently, two states—Pennsylvania and Alabama—made it legal to hunt deer with the weapon.  It is probably only a matter of time before it becomes an Olympic sport (while California bans its possession). 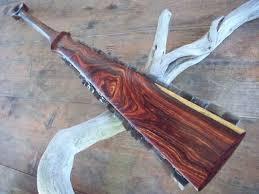 Our next invention was also used by the Aztecs.  The maquahuitl was a cross between a sword and a club.  Made from hard oak and three feet long, the edges were embedded with obsidian stones, each sharper than their steel equivalent blades.  Another version of the maquahitl was five feet long and intended to be used with two hands.

According to the Conquistadors, the longer version could completely sever the head of a horse with a single blow.  I can’t prove this, since as far as I know, no historian has actually tried this on a horse, living or dead.  (And it’s probably illegal to hunt deer with them, even in Alabama.)

The Spanish were fascinated by the maquahuitl, so they took numerous examples back to Spain, where examples soon found their way across Europe.  Since the weapon was sharper, and more deadly than the best steel swords in use at the time, this was understandable.  When the great explorer Sir Richard Burton wrote The Book of the Sword, he went into lengthy descriptions of the formidable weapon.  Since the method of working the obsidian into sharp blades was lost after the destruction of the Aztec Empire, the production of the maquahuitl died with it.

The last rare weapon is the col de mort, the collar of death.  This is a small sharpened metal point to be slipped over the otherwise safely blunt tip of a fencing epee with the aim of turning a safe sporting implement into a murderous weapon.  This is the exact opposite of the safety tip that could be affixed to a regular epee to render the weapon safe during practice. 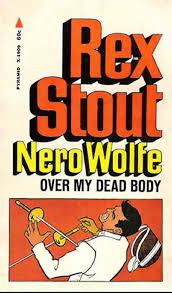 This is a fascinating device, and without a doubt, the most rare of the four weapons discussed here.  Actually, this weapon is so rare that it may have never existed at all, since the earliest reference I can find of the col de mort is in the 1940 novel, Over My Dead Body, by Rex Stout.  All of the numerous other written references that I can locate were either anecdotal or reference Stout’s work.  And no source that I can find includes a photo of such a device.

Since fencing dates back to the end of the 15th century, and was fashionable long after the sword stopped being a significant weapon of war, it is almost impossible that someone didn’t use a similar device at least once.  When fencing salons were mandatory parts of every aristocrat’s education, there must have been at least one “accident” committed somewhere.

This is exactly why I have included the col de mort in this list.  Somewhere, someone may know of an earlier example.  I’m waiting to hear from you.