As he pulled the truck up to the barn, the old rancher sighed.  He didn’t really like his new pickup, and wished he was still driving his old Ford.

As he climbed down from the new truck, he glanced over at the old truck, with its multiple dings and dents, with the cracked rear window, and with the twisted antenna that had resisted a dozen attempts at straightening it with pliers.  The old rancher had joked numerous times that the truck was old enough to vote.  Sadly, he had recently realized that the truck was getting close to being old enough to drink—twice.

For years, his wife and son had urged him to replace the vintage Ford, but he had resisted, insisting that the truck was still reliable and that he was used to its peculiarities.  The transmission jammed easily unless you knew how to baby the stick, there was some kind of intermittent short with the turn signals, and the bench seat was about 4 inches lower than it had been when he had bought the truck in the seventies. 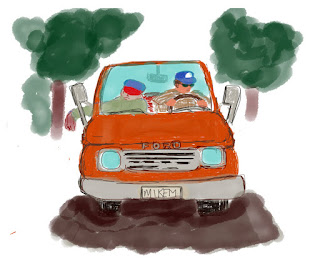 Still, he loved the old truck.  It was reliable and he knew all of her quirks and idiosyncrasies.  He had worked on the truck so many times, he could repair anything on it without consulting a manual, and probably already had the necessary parts in the aluminum truck box behind the cab.

Sadly, however, he had been forced to admit that the old truck was taking longer to get up to highway speed, had a little play in the steering, and was taking uncomfortably longer to brake to a stop.  His wife had been bugging him for years about airbags and better safety, too.  The deciding moment had come when he had loaded the backhoe onto its trailer and attempted to tow it to the dealership for repair.  The old truck just couldn’t handle the job and sadly, he knew then it was time to purchase a new truck.

After spending an entire day wandering the dealerships looking at new trucks, the old rancher had almost changed his mind—the new trucks were depressingly expensive.  Worse, he didn’t like what he saw, as the newer trucks seemed more suited to taking the family to church than to being a good work truck.  He didn’t want carpeted floors or leather seats...he wanted durable vinyl and a heavy-duty bed.  By the end of the day, he had decided he wouldn’t trade his old truck for a new one, even if the dealership had offered the swap for no money.

There were several things about the new vehicles he didn’t like.  He wanted an 8-foot bed on the truck--one long enough to haul lumber and the newer trucks were too short.  They all seemed too fragile: the metal bodies felt too thin, the bumpers were plastic, and he really didn’t need all the bells and whistles the newer trucks all seemed to have.  As far as he was concerned, these features were just so many fragile toys that would soon need repairs.  The new trucks aggravated him—all he needed was simple transportation and a reliable work vehicle.

In all the ways that mattered to him, the new expensive pickups were just not as reliable as his old one.  Also, the fact that the new trucks cost several times what he had paid for his last pickup made him angry; he felt that half the price he would have to pay was going for ‘pretty’ instead of ‘useful’.

There was, however, no way that he could continue to ignore the obvious—he needed a newer truck.  As much as he didn’t like it, he had to find more dependable transportation.  After several more trips to various dealerships, he finally bought a truck.  Not at a dealership, but from a private owner whom his son had located on the internet.

It seems that the Southwest was a popular place for retiring snowbirds—those poor damn Yankees freezing their asses off up north—to move after retiring.  Brand new travel trailers were regularly towed south by eager retirees seeking to thaw out.  As soon as they arrived, the joy of driving large trucks built for towing a heavy loads soon wore out and they were eager to sell their new trucks and purchase smaller cars.

The “new” truck only had a few thousand miles on it, had cost about half what the dealership wanted, and still had far more features than the old rancher had wanted, but it came with a heavy duty towing package and had a long enough bed that he could still haul a full load.  He doubted the new truck would last half as long as his old truck, despite costing twice as much.

It was going to take a long time to get used to the automatic transmission, as he was used to a ‘four-on-the-floor’ manual transmission.  After buying the truck, all the way home he had kept stomping on an imaginary clutch pedal, something he doubted he would ever stop doing.

It was about a week later that his son came to visit and found the rancher in the barn replacing the spark plugs on the old truck.

“What are you doing, getting it fixed up to sell?”, asked his son.

“Yep.  I’ll use the new one on the highway and for towing the trailer.  But I’ll keep using the Ford on the ranch.  She’s a better work truck, and still has years of life on her.”

“You’re just too stubborn to accept change,” his son answered.

The old rancher gathered the wrenches he had laid out on the old Ford’s fender, returning them to the tool box and slammed the hood closed on the truck.  As he walked to the side of the Ford truck to return to the tools to the truck box, the son continued his questions.

“It’s old, and worn out, and no longer works the way it used to.  It’s time to replace it with something newer.”

The old rancher, shut the truck box, turned and leaned against his old Ford.

After a long pause, the old rancher finally answered, “Which one of us are you talking about?”